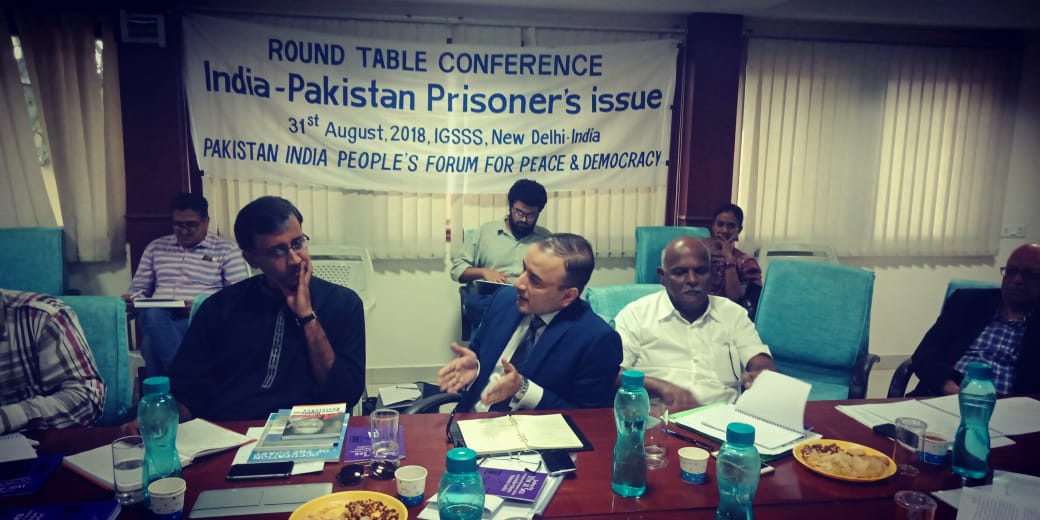 Members of Pakistan India Peoples’ Forum for Peace and Democracy (PIPFPD) held a Roundtable Conference on 31 August 2018 at India Islamic Cultural Centre, New Delhi on the issue of Pakistan-India prisoners. A day earlier, on 30 August 2018, the Senate of Pakistan in response to a question was apprised that 594 Pakistanis are currently incarcerated in Indian jails while 472 Indians are imprisoned in Pakistani jails.

Advocates from Legal Aid Society shared details of a young boy from India they had come across in Karachi central prison on 28 August, the day before coming to Delhi. He has been in prison for the past three years, having been arrested in 2014. Although his sentence ended in May 2015, he cannot be repatriated as his Indian identity has yet to be established. Around 17-18 years old, he is mentally unsound and unable to provide any details about his family or home address. All he says is “Bharat”, and gives his name as “Chevy, son of Lorak”. He is also under treatment for TB. They have appealed for the media to raise his case and share his photo so his family may identify him and come forward, allowing his identity to be established.

In a press release of 3 September 2018, PIPFPD issued the following statement from the Roundtable Conference

We, the citizens of India and Pakistan, assembled in New Delhi for the Roundtable Conference on Prisoners issue, assert and demand the following:

1)      We are pleased to witness a changing course in the Pakistan-India relations. We urge that voices of peace and sanity must be encouraged, especially between citizens of both countries

2)      Conducive atmosphere for a peace process must be created between Pakistan and India, by both governments

3)      The Indian and Pakistani governments must follow the international and bilateral treaties and agreements on the issue of prisoners and make sure that the agreements, including for consular access, commutation of the sentence on medical and good conduct basis, speedy verification of nationality, etc. are implemented.

4)      Both countries must activate, with immediate effect, the stalled process of the Joint Judicial Committee on Prisoners. The Committee has not met since 2013! It is welcome that India has sent its nominations of four former judges for the same. Pakistan Government must reciprocate on this immediately and facilitate the Committee for fresh deliberations.

5)      Immediate measures should be taken by both countries to release the above-65 age group prisoners on humanitarian grounds.

6)      Till the time a more permanent transformation to the issue of fishworkers arrests and release is achieved, both sides of the marine forces must implement absolute restraint in arresting fishers and confiscating boats. A ‘no arrest’ policy must be put in place and implementation must be assured.

7)      The fishworkers and other prisoners should not be dealt with as a ‘goodwill gesture’, that the release of those completing sentences should be made a monthly routine and that all efforts for expediting the process of nationality verification should be made

8)      The families of those in jails of India and Pakistan from the other country, must be allowed to communicate on a frequent basis with the under-trial prisoner / person serving the jail term

9)      The body of any person, who meets with a fatality while serving jail term, must  be sent to the home country with immediate effect

10)  Efforts to release boats in captivity must be done by both governments. Pakistan had released 57 boats earlier and is in the process of releasing 22 more boats in operational condition. India must reciprocate the action to make sure that trust and confidence are maintained at the diplomatic level

11)  India must keep all fishworker prisoners from Pakistan in a single jail, to facilitate and ease consular access

13)  The Governments must follow a transparent information protocol on the status of prisoners of the other country and make the information available to the concerned non-state groups and organisations, to facilitate better release processes

14)  Cases like that of Mumbai-based IT Engineer Hamid Ansari, who was convicted by a military court of Pakistan, for entering Pakistan without a valid visa, ought to be looked at from a much more humanitarian prism. Most agencies involved in the case investigation were convinced about Mr. Ansari’s non-involvement in espionage or other serious crimes. Pakistani and Indian authorities must ensure speedy release of such prisoners, following the earlier recommendation of the Joint Judicial Committee.

Below, key Resolutions from the Roundtable Conference seeking short-term and long-term solutions from the Governments of India and Pakistan. A policy brief in this context ‘Ending the War at Sea: in pursuit of permanent solution to the India-Pakistan fisheries conflict’ was released at the occasion.

Advocates Altaf Khoso and Haya Emaan Zahid of Legal Aid Society show a photo of Indian prisoner “Chevy” whose identity has yet to be established.

o       Given that a substantial number of prisoners involved are fishworkers, who knowingly or unknowingly cross the International Maritime Boundary Line (IMBL) and get arrested and their boats confiscated, the arrests of these people, while engaging in only fishing activity, must be discouraged to the extent possible.

o       The destructive coastal development paradigm followed by the Government of India and the state Government of Gujarat has resulted in near total industrialization of the Gujarat coastline, has led to a near total destruction of marine fertility and depletion of fish availability in the Gujarat sea. This has pushed fisherfolk further out to sea in search of reasonable fish catch, leading to their entering Pakistan’s sea borders and getting arrested.

FIND HIS FAMILY: Legal Aid Society members came across this mentally unsound boy aged around 17-18, in Karachi central prison. Unable to provide any details about his family or home address, all he says is “Bharat”, and gives his name as “Chevy, son of Lorak”. Arrested in 2014, his sentence ended in May 2015.

o       Substantially higher numbers of Indian fishworkers cross the IMBL and get arrested by the Marine Security Agency (MSA) of Pakistan. This requires closer study about the history, centuries-old traditions of fishing, the importance of fishing in the region and the impact the arrests have on the livelihood of the fisherfolk and the marine economy of Gujarat. This also calls for out-of-the-box solutions, along the lines of Maritime Economic Cooperation Agreement between the Governments of India and Pakistan, with fishworkers from both sides recognized as key stakeholders. This means creation of regulated joint fishing ground, a new license era for the fishworkers and resolution of the Sir Creek conflict. Joint patrolling of the sea by the marine security forces including the MSA, the Indian Coastguards, the Indian Navy, etc. could also help Pakistan and India secure the Indian Ocean from exploitative loot by foreign bottom trawler fishing vessels and pirates. However long drawn a process this could be, we are certain it will help find a permanent resolution to the issue and serve the sovereign interests of all the parties concerned.

Brief about the Roundtable

Parents of Hamid Ansari, Indian prisoner in Pakistan, share their pain with the Roundtable.

Representatives of the Pakistan High Commissioner’s office in Delhi also partipated and extended support to the Roundtable initiative and objectives. Despite having supported the Visa process for the Pakistani delegation, the Ministry of Home Affairs and the Ministry of External Affairs of Government of India, did not participate in the Roundtable.

Participants paid homage to visionary civil society leaders and peace activists who have passed away recently including Kuldip Nayar, Madeeha Gauhar and Asma Jahangir. The meeting paid homage to the former Prime Minister of India Atal Behari Vajpayee, while remembering his contribution to building peace momentum. The meeting also commended the proactive and life-saving role played by fishworkers and NFF-India members in the recent Kerala floods.

Imran Khan writes to Modi for resumption of dialogue: report A champion of peace