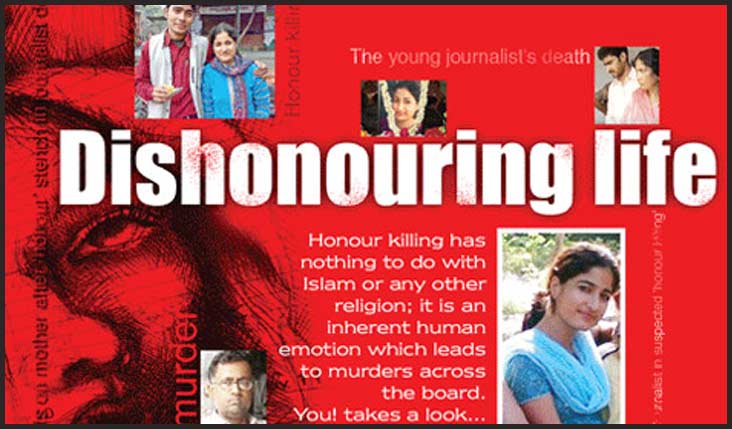 Honour killing has nothing to do with Islam or any other religion; it is an inherent human emotion which leads to murders across the board. You! takes a look…
By Lubna Jerar Naqvi

On April 29, Nirupama Pathak, a Delhi based journalist, was found hanging from her bedroom fan in Koderma in the Indian state Jharkhand. A suicide note was also found from the scene of the crime claiming she could not handle the pressure at work, and therefore was ending her life. However, a post mortem conducted on the young woman’s body revealed that she was attacked and smothered. The cause of her death was declared to be asphyxiation. The post mortem also showed that at the time of her death, Nirupama was 8 to 12 weeks pregnant.

Reportedly, 23-year-old Nirupama was in a relationship with another journalist in Delhi. She had called her boyfriend on April 28 saying that she wouldn’t be returning to Delhi. When inquired, her boyfriend told the Indian media that, “She (Nirupama) was to return to Delhi, but her ticket was cancelled. She called me on April 28 and said ‘you would need to forget me as I won’t be able to come, they won’t let me come’.” He also told the media that she had shared her distress of being emotionally blackmailed by her family into changing her mind to marry him. She told him that they wouldn’t let her come back, when her boyfriend asked her who they were, she had said my mother and my brother’s friends. However, she hadn’t managed to tell him the extent of the danger she was in, and he was only to find out later when he heard the news of her death.

Nirupama had been asked to come home as her mother was sick, only to be killed soon afterwards. Apparently, at the time of the murder, Nirupama’s father and brothers were away, and only her mother was at home. The police have arrested her mother on charges of murder. The Indian media claims that Nirupama became a victim of honour killing because she had fallen in love with someone outside her caste.

Initially her father told an Indian TV channel that he opposed the system of inter-caste marriages and that his family did not play any role in his daughter’s death. He claimed that he had no idea why the post-mortem of his daughter showed that she was murdered. But a letter from him to his daughter revealed that he didn’t want her to marry a man from a lower caste as she belonged to a higher caste. In this letter he also reminded his daughter that the country’s constitution is over 60 years old while their religion is ancient. This makes it quite evident that the father was upset, to say the least, that his daughter was involved with someone out of their caste.

And if that wasn’t enough, the post-mortem report revealed that Nirupama was killed, forced by at least three people, and although there was no outside injury on her body she was suffocated, while she was held down. Her father and brothers have also been taken into custody by the police.

This incident shows that as incorrectly believed honour killing is not a religious act, supposedly only carried out by conservative Muslims and mostly in Pakistan, but is a phenomenon in various religions, cultures and regions. Honour killing has nothing to do with Islam or any other religion; it is an inherent human emotion which leads to murders across the board when a mass of people believe that someone has dared go against what is generally considered to be normal.

One would think that as in the case of an educated family like that of Indian journalist Nirupama’s, education and exposure would help broaden one’s intellectual horizon. However, this doesn’t seem to be the case. On the contrary, education and exposure has nothing to do with one’s traditions and customs. The caste system is still quite strong in India, where many still frown at inter-caste marriages. Education, law or constitution is put aside when one’s belief and traditions are endangered.

In countries like India and Pakistan, there are many areas where murder in cold blood is greeted with respect and the murderers are considered worthy of their salt for taking this step against the defiant. In fact there have been several cases where those involved in honour killings are given more respect than the average person. So pumped up are these people with ‘honour’ and pride that they even give themselves up to the local authorities fully aware that they will not be prosecuted.

Like most cases of honour killing, this Indian journalist’s murder was carried out by her own family. However, both in India and Pakistan sometimes this social crime is committed by the elders of the village, clan or family. These local councils or panchayats are the courts and lawyers of that particular region. Their verdict is usually never challenged by the family, which seem to believe that local council is the last word in law. And they cannot be blamed for believing this. For a majority of people living in the subcontinent hardly ever see a lawyer or approach a court of law; and an even larger portion of these people have no idea that the local panchayats don’t hold any legal status. For them, these are courts of law and any decision given by them is the final verdict. How else can you explain that women are raped as punishment of sex crimes committed by their male relatives as the result of the verdicts given by these courts in the presence of the whole community? A case in point is Mukhtaran Mai; the local council of elders sentenced her to be raped by the members of the community because her younger brother was allegedly having an affair. According to other sources, the brother was only seen with the woman on a public street. However, the local council saw it fit to have the brother pay for his ‘sins’ by ordering that the sister be raped.

In other cases, women and sometimes couples have been murdered in the name of honour. This is basically to cover up the crimes of their male relatives, for there have been instances when women as old as 60 years of age have been killed for having illicit relations with males half their ages.

Ironically the woman is collateral for the crimes committed by her male relatives. All customs and traditions are wrapped around her and she faces the brunt. But these social crimes are committed without any fear basically because of the power these local councils hold over the people of that area.

Despite this, many individuals, and at times families, defy the verdicts and are exposed to the wrath of their community after which they have to flee the area and move outside the legal parameters of these councils. Even when they are assured safety by the law and given shelter, they seem extremely distressed as they know the local councils are bent upon serving justice and could go to any height to punish the alleged.

The power of this local parallel justice system can only be stemmed and made ineffective if the country’s legal system is made more powerful and cases are expedited. Secondly, those seeking redress from such local panchayats or councils, must be educated against this practise.

India ready for composite talks with Pakistan The water factor