Dr Chishty: coming home and a big thank you 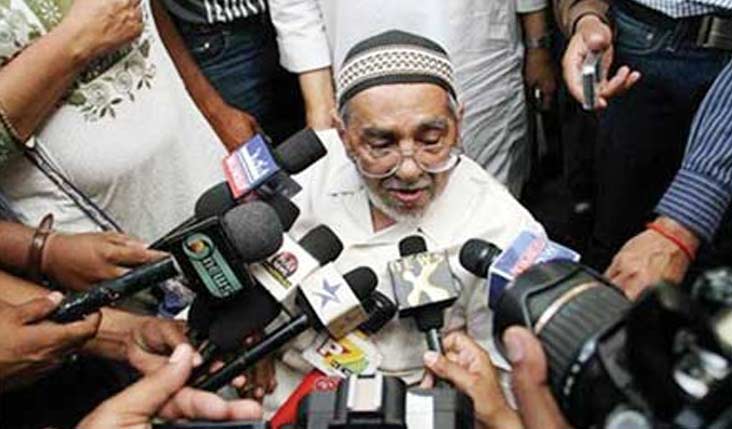 Dr Chishty talks to his family and to the media after being allowed bail in India. "Merely because he is a Pakistani, can we treat him differently? We can understand if you say he has links with some terrorist organisation," observed Supreme Court Justice Sathasivam.

Last week, in response to the Indian Supreme Court’s unprecedented judgement allowing Pakistani prisoner Dr Khalil Chishty to travel to Pakistan on bail until the next hearing, the virologist’s family issued a statement of gratitude to those in India and in Pakistan who helped make this possible.

“We are grateful to the Indian Supreme Court for allowing Dr Chishty to return home for five months, and to expedite the special leave petition, which is scheduled for hearing on the 20th day of November 2012,” says the press release, dated May 10, 2012.

The family thanks the two member bench of Justice P. Sathasivam and Justice Chelameswar “for their compassionate and humanitarian judgement”, and lawyers Nitin Sangra and U. U. Lalit “for their professionalism and hard work, without their diligent efforts this day would not have been possible”.

They thank Justice Markandey Katju “who supported and advised us at every juncture, the People’s Union of Civil Liberties (PUCL), India especially Kavita Srivastava general secretary of PUCL for her tireless and unconditional efforts, and Beena Sarwar of Aman ki Asha for her help, support and guidance.

“We would also like to thank all our Indian and Pakistani friends for their continued support, especially Mahesh Bhatt, Jatin Desai, Kuldip Nayar, Shivam Vijj, Senator Iqbal Haider, and Brig Rao Abid of the Human Rights Commission of Pakistan (HRCP), as well as all the Indian journalists and media organisations that highlighted the issue.

“We are grateful to the government of Pakistan for taking up Dr Chishty’s case at the highest level.

Special thanks to Justice Katju: Dr Chishty’s youngest daughter Amna, based in Canada and the driving force behind efforts to get him released, also wrote to retired Indian Supreme Court Justice Markandey Katju, dated May 11, 2012, copied to several of Dr Chishty’s family members. She forwarded it to Aman ki Asha, requesting that it be published in order to publicly acknowledge Justice Katju’s role.

“I really have no words to express my gratitude to you,” she writes. “My family and I will be forever grateful for all that you did. From taking on hostile government officials to making appeals to all those who mattered you have been a pillar of hope for us. I can truly say that we would not have been able to see this day if you were not with us.

“You put us in touch with lawyers like Mr Lalit and Mr Nitin, who not only granted a special favour in terms of fees but also were extremely professional and patient in dealing with me and my husband as we tried to coordinate the case from Canada. We are grateful to you for following up with them continuously.

“While I understand you are a humble person who does what he can simply for sake of humanity, I still believe that people like yourself are not too many in India and Pakistan and thus must be celebrated and appreciated. My father is not the first, nor the last, such case. I know currently you are appealing for a similar case in Pakistan. Such efforts give hope to hundreds of families like mine who have no clue who to turn to when their loved one is stuck on the wrong side of the border. For efforts like these, Sir, you must be given your due recognition. Thanks to your efforts and those of people like Beena Sarwar, Kavita Shrivastav of PUCL and many others my father will be going home soon InshahAllah.

“Even though we are not related, for all that you have done for us we consider you a part of our family and if you are planning on coming to Pakistan or Canada, it would be our honour to have you stay with us. Please consider my home in Montreal and my father’s home in Karachi as your own.

“Please except my profound gratitude and thanks. And please count myself and my husband as ardent supporters of all your humanitarian efforts.”

Justice Katju replies: Justice Katju replied later that day, in an email that was forwarded to Aman ki Asha, saying that he was in Allahabad (his native city) when he heard on TV about the Supreme Court order permitting Dr Chishty to go to Karachi.

“You cannot imagine how happy I was on hearing this!” wrote the retired judge, who has been fighting for Dr Chishty since being forwarded Amna Chishty’s appeal in April 2010. The case caught his imagination, reminding him of Dr Manette in Charles Dicken’s novel A Tale of Two Cities, who was kept in the Bastille for 18 years for no fault of his.

On learning the details of the case, Justice Katju felt that “great injustice” had been done to Dr Chishty, “and he had been falsely implicated in the case only because he was a Pakistani.”

“Although your father was in no way connected to me… I was not related to him, nor belonging to his caste or religion, yet as a fellow human being I thought it was my duty to help him, as he appeared to me to be a victim of great injustice and prejudice.”

“I never gave up hope, though others did. Now I am so happy that my efforts have borne some fruit.”

The Mandir near the Malik’s ancestral house

Retired Indian Supreme Court Justice Markandey Katju has appealed to President Asif Ali Zardari to release Sarabjit Singh, an Indian who has been on death row in Pakistan for 21 years, convicted for involvement in a 1990 bomb blast in Lahore which killed 14 persons. His lawyers believe it’s a case of mistaken identity. In a follow up email Justice Katju writes, “I was going through his case, and with due respect to the verdict of the Court I have some grave reservations about its correctness. The principal witness, Shaukat Salim, later retracted his statement and said he gave it under police pressure. The other piece of evidence was Sarabjit’s alleged confession, but we all know how confessions are obtained in our countries (by third degree methods). In any case 21 years on death row are enough…”

We agree, and we hope that the President will heed Justice Katju’s appeal, in humanity’s name.