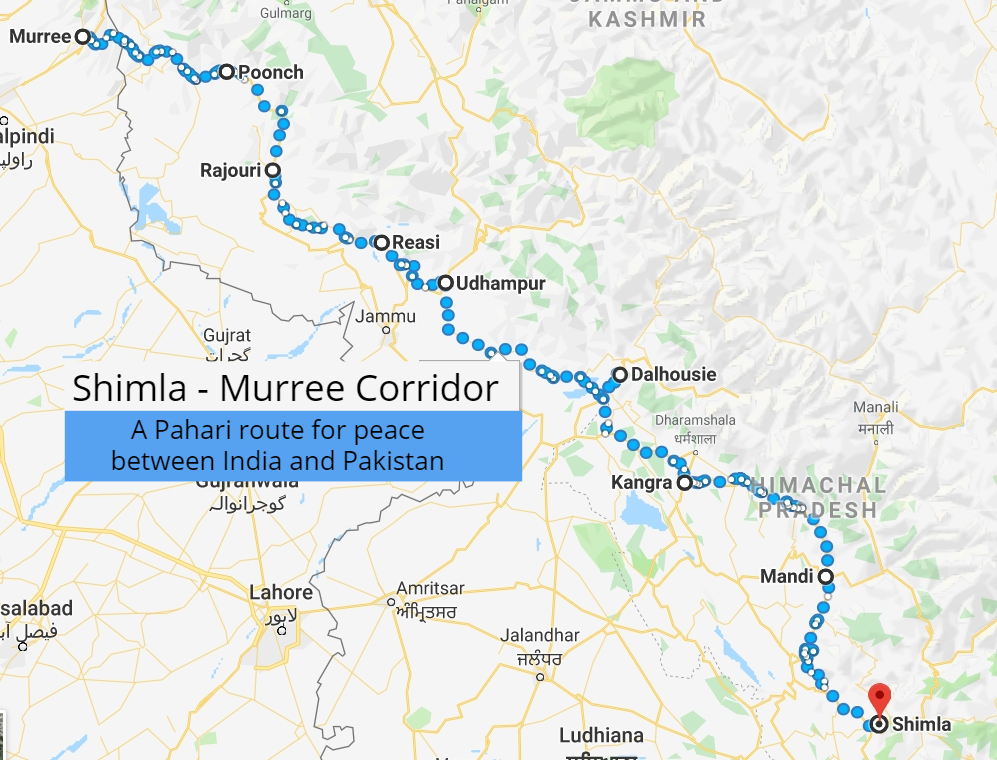 Visa-free Pahari corridor: The blue line denotes the proposed route and the places which the corridor could cover. This includes the major Western Pahari areas like Poonch, Rajouri, Reasi, Udhampur, Dalhousie, Kangra, and Mandi.The corridor can be extendedfrom Murree to Muzaffarabad on the Pakistani side

India and Pakistan’s agreement to build the visa-free Kartarpur Corridor enabling Sikh pilgrims to access their holy sites in Pakistan revived a hope for peace among the people of both countries. Another almost forgotten dividend of peace, like Kartarpur Sahib was for nearly 20 years, is the idea of a visa-free corridor in the Western Pahari (mountain) belt.

This is something that my late uncle K.C. Sharma, who passed last September at the age of 92, always talked about.A freedom fighter who was jailed in Shimla during the 1942 Quit India movement, he told me about the culturally similar Western Pahari belt across borders that our text books are silent about.

The area has a rich legacy beyond its colonial past, long before the British colonists shifted their summer capital from Murree to Shimla 155 years ago. My uncle K.C. Sharma dreamt of a visa-free corridor stretching along the nearly 600 km of this belt, from Shimla district in India at one end, to Murree in the Galyat area of Rawalpindi district in Punjab, Pakistan.

The belt includes the Pir Panjal Range — Mandi, Kullu, Kangra and Chamba (Himachal Pradesh) –and parts of Kathua, Udhampur, Reasi, Rajouri and Poonch (Jammu & Kashmir) on the Indian side, and Azad Jammu & Kashmir, including Rawalakot, Mirpur and Muzaffarabad, on the Pakistan side.

The lifestyles, culture and languages are similar, linked to the historic movement of nomadic Pahari Gujjar, Bakarwala and Gaddi tribes in the region. Pahari languages–Mirpuri, Pahari-Pothwari, Poonchi, Gujari, Chambeali, Mandeali, Kangri–related to Punjabi and Dogri are heard on both sides of the divide.

The proposed corridor would be restricted to the Jammu regions of J&K on the Indian side, away from the Kashmir valley that is the primary site of conflict between India and Pakistan. Infrastructure already exists to take this idea forward. Most of the route would have a two-lane road, starting from India’s national highway NH48 (Shimla to Mandi), then NH 148 (Mandi to Dalhousie). From Dalhousie it would be the functional Bardawah inter-state road till Udhampur, from where NH 144 A leads to Poonch. From there, the still functional cross-border route to Rawalkot can be used and then the Kohalabagh road linking Rawalkot to Murree. The corridor could have security checkpoints in the Himachal Pradesh-Jammu Kashmir border and at the Line of Control.

The tragedy of the Western Pahari community and region is that we hardly hear about any move to revive ties, except calls from groups like Jammu and Kashmir Sharnarthi Action Committee and Refugee United Forum (RUF) in India. There may be similar calls in Pakistan.

After 1947, at least a million people were displaced from either side of the divide. There were two other phases of displacement after the India-Pakistan w

ars of 1965 and 1971. Almost 5,000 families are resettled in the Rajouri and Poonch districts of Indian-administered Jammu & Kashmir.

The Sikh Empire incorporated the entire Western Pahari belt for half a century, 1799-1849. Divisions along geographical and religious lines have grown since then, but the current era of globalization presents an opportunity to revive ties across borders.

A Shimla-Murree visa-free corridor along the LoC (Line of Control) that is both culture- and economy-centred will enhance the economies of the Pahari area and give a boost to the Pahari identity. These developments will help combat religious orthodoxy and hyper-nationalism discourses by strengthening cultural identities.

The launch of the Poonch-Rawalakot bus and truck service in the mid-2000s was a positive step in this direction. Full-fledged trade along the route was revived in 2008, with over 20 items including spices, vegetables, fresh fruits, carpets, shawls, wooden furniture approved.

Between 2008-2016, trade across the Muzaffarabad-Uri and Poonch-Rawalakot route was around 699 million INR, according to a 2016 report by Bureau of Research on Industry & Economic Fundamentals (BRIEF).This has quietly emerged as the biggest confidence building measure between the two countries, particularly the Poonch-Rawalakot route.

There is tremendous trade potential through the proposed extended route, that can help revive the debt-ridden economies of the provinces on either side of the border.

Revived linkages would boost a Pahari music and film industry and promote bilateral tourism, as has happened in the European Union where roads connect tourist attractions in different countries. Such access also facilitates the interaction of academicians, students and interns, generating and developing ideas that benefit both sides, besides regional cooperation on hill agriculture, horticulture and forestry.

Shimla, Murree, or for that matter the entire Pahari region, and indeed other areas in the region,are bound by the state systems and structures imposed by New Delhi and Islamabad. Bordering provinces in either country do not have a free hand to resolve bilateral issues related to their areas. Nor do they have or federal governing systems like those adopted by UK and Nordic countries.

The proposed Shimla-Murree Pahari corridor can be a catalyst to peace and prosperity in the Western Pahari region and beyond.A similar initiative for Lahore-Amritsar would be another dividend of peace, a win-win for people on both sides.

These would be great connections, but can of course only be implemented after a lasting peace has been established by our countries. Till then the policing and security considerations along such routes will continue to pose an insuperable barrier to a peaceful South Asia.

Vishal Sharma recently completed his M.A in Public Policy, Law & Governance from the Central Univeristy of Rajasthan, India.. He founded the Limbic Movement centred around a social organizational sphere aiming to advance the Limbic ideological dimension in the fields of Law, Public Policy and Social Work.