Everyone pitches in to mend Pakistani girl’s heart 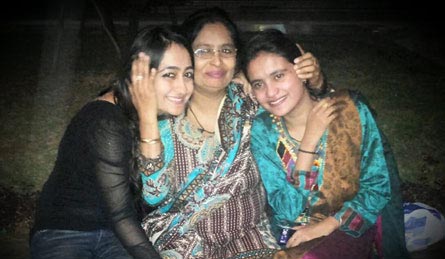 At Mumbai airport: Nitu with 'Ammee' and Kiran

Bangalore: Kiran Soomro could not have asked for a better gift on her 17th birthday. This youngster from Karachi in Pakistan is travelling to Bangalore for a heart surgery at Narayana Health. Born with a hole in her heart which made small things like sitting up or drinking water laborious, Kiran hopes to get this congenital ailment fixed.

Kiran is the eldest of six siblings. Her father Sikandar Ali, a former government employee, now sells potato chips for a living. A surgery to fix his daughter’s heart was beyond his means. But that was until they met a Mumbai-based classical dancer Nitu Jiwnani.

It was at a cultural programme in Dubai where Nitu, Kiran’s guardian angel, first heard about the ailing teenager. And it was at their subsequent meeting in Delhi that Nitu decided to support Kiran. “She talked extensively about her condition. She so badly wanted to live but was unable to raise enough money for a surgery. After talking to each other and also conversing over the phone, we became friends,” recalls Nitu. Being a Sindhi, whose grandparents had migrated from Pakistan, Nitu felt all the more responsible for Kiran.

There was no looking back for this performing artist pursuing her masters degree in Kathak. Having heard of Aman Ki Asha, the joint initiative launched by The Times of India and the Jang Group of Pakistan, Nitu decided to try her luck on their Facebook page. She just typed, ‘I am an Indian and I want to help a Pakistani girl’. And it worked.

“Within minutes of posting the message I started to get responses. The diaspora community and Rotarians pledged generous sums of money, enough for the operation. Aman Ki Asha and Rotary India/Pakistan then took up the case through their ‘Heart To Heart initiative and PIA donated the three air tickets. The Jang Group in line with its AKA campaign promised to help the girl with her visa and travel expenses,” Nitu told TOI on Monday.

Once in Bangalore, the Rotarians will take care of their accommodation and medical expenditure. “They will be put up at Narayana Health’s guest house,” said O P Khanna, the Rotarian who is co-ordinating Kiran’s stay here in the city.

The Soomros landed in Mumbai on Monday where Nitu received them and helped them in transit from the international to the domestic terminal. They took a late afternoon flight to Mumbai and then a 9.30pm Indigo flight to reach Bangalore only at midnight. The schedule got a little upset after the first flight from Pakistan got delayed owing to immigration formalities.

“It’s a great feeling to be here in India. She should soon be alright, Inshallah,” said Sikandar Ali, speaking to TOI from the Mumbai airport. He said they had three hospitals, with two in Gurgaon to choose from, but they zeroed in on Narayana Health based largely on the recommendations of his friends. “I am so happy to be here. It’s just that I am a little tired but I know I have one more flight to take before I reach Bangalore,” said a beaming birthday girl Kiran.

In Delhi last year, doctors refused to operate on her saying that both her lungs were infected, a condition which deemed her unsuitable for any surgery.

“The child has a hole in the heart and very high pulmonary hypertension, which means both her lungs are damaged. Operation as such will be very risky but in all likelihood we will carry out the operation,” said Dr Devi Shetty, chairman, Narayana Health.

So when Kiran walks in to Narayana Health on Tuesday, doctors would put her on a few tests where she will be thoroughly examined (anywhere between two to four hours) and after evaluation, Dr Shetty will take a call on the date of open heart surgery.

'There is no love during India-Pakistan matches' Aman ki Asha