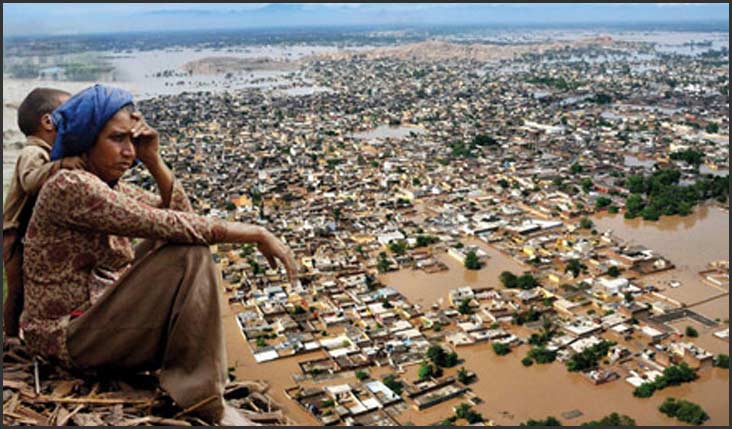 Floods across the border

As massive floods rage across Pakistan, affecting over 14 million people and leaving over 1,600 dead so far, Pakistanis and Indians living abroad are coming together to contribute to various relief agencies working to help those affected by the worst natural disaster in Pakistan’s history. According to the UN, the scale of devastation caused by these floods has eclipsed that caused by the 2004 tsunami and the 2005 Kashmir earthquake.

Government and private relief agencies are managing to provide “only five percent of what’s required,” according to Mujahid Khan, provincial spokesman for the Edhi Foundation, which runs Pakistan’s largest non-governmental organisation for humanitarian aid and rescue services.

The Fraser Valley Peace Council in Vancouver, Canada, has collected around $ 7000 so far in contributions from Americans of South Asian origin, including Sikhs, Hindus, and Muslims. The local Chinese and Caucasian communities have also contributed to this collection. The Peace Council has been active in Vancouver for the last three years, earning respect for several peace-related joint activities involving Canadians of Indian and Pakistani origin.

“We have set an internal target of 10,000 dollars by 14th August,” says Shahzad Nazir Khan, a FVPC volunteer. “Besides our Pakistani community, this amount made possible only because of the generous contributions by the people of different communities, especially from our Indian brothers and sisters.”

The Peace Council plans to send the money to the Edhi Foundation for its work in flood-devastated areas.

The Indo-Pak people-to-people peace caravan “Aman Ke Badhte Qadam”, inaugurated in Karachi on Aug 7, set up a Flood relief Camp (see related story ‘A people’s march for peace’). Kamla Bhasin, one of the caravan leaders in India (inaugurated on July 27) wrote to her counterparts in Pakistan asking what they could do to help. “We could have raised funds but the kind of people we work with cannot raise a decent amount. Some doctors and volunteers could have gone but visas are always a problem,” she wrote, asking for advice on how they could help.

According to an estimate by the United Nations, Pakistan needs billions of dollars in aid to cope with flood relief activity and rehabilitation.

Anas Abbas, a UK-based researcher, has compiled a list of donations and contributions so far to Pakistan from around the world. So far, the total is far short of the amount actually needed, but the bulk of what has been pledged is coming from Western countries.

According to his findings, the World Bank has set up an aid fund at Pakistan’s request with initial pledges of $80 million.

The USA, which many Pakistanis view as an enemy, has contributed $35 million so far. Ongoing American initiatives include donations from private individuals and other government funded agencies, and mobilising aid from other nations, such as Kuwait.