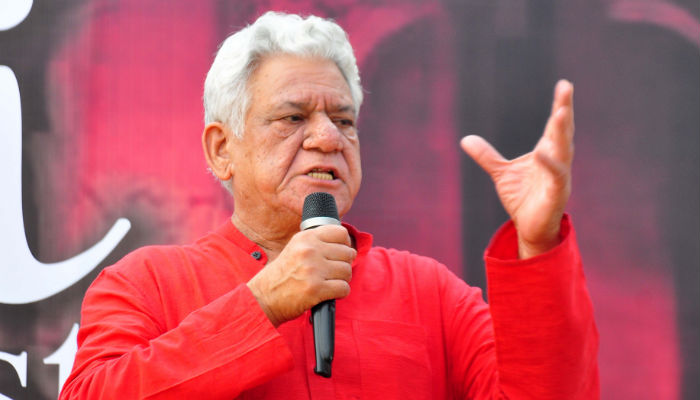 Legendary actor Om Puri’s untimely death has saddened film and peace lovers not only in India but in Pakistan and around the world. Like his long-time friends and colleagues Naseeruddin Shah and Mahesh Bhatt, and younger colleague Nandita Das, he had a special relationship with Pakistan due to his desire for better relations between the two largest countries of South Asia.

He often talked of his fondness for Pakistan and Pakistanis, whom he knew abroad for 20 years before first visiting the country for the KaraFilm Festival in Karachi. This privately organised film festival (2001-2009) can be credited with easing the restrictions on Indian films in Pakistan by bringing them back to the country’s big screens. This in turn has contributed to the revival of Pakistani cinema that brought Om Puri back to the country to act in one such film.

At the KaraFest in 2004, Om Puri’s powerful role in Dhoop as a father who loses his only son in the Kargil War — based on a true story – led to an interesting discussion session with Puri after the screening.

“What struck me as particularly appealing about the man is that he hardly said two sentences in English, even if the question was worded in that language. His Urdu was quite articulate and fluent, and he said something particularly nice – yeh kahani donon mulkon ki hai” (this is a story of both countries), wrote a blogger.

“Om Puri was an international star but he was one of the most down-to-earth people I’ve ever met,” said KaraFilm founder Hasan Zaidi in a series of tweets.

Puri has often said that the special relationship Indians and Pakistanis share whenever they get a chance to meet makes it hard to believe that there are conflicts between the two countries. He was vocal about the need for both sides to find a way to peace and work for progress, friendship and trade.

Karachi, March 2017: Om Puri and Nabeel Qureshi share a laugh after completing the filming of Actor in Law

Om Puri plays the role of a Pakistani in several movies — Zia-ul-Haq in Charlie Wilson’s War (2007), George Khan, the conflicted migrant in Gurinder Chada’s East Is East (1999) and its sequel West Is West (2010), Abu in Mira Nair’s The Reluctant Fundamentalist (2013) and the sympathetic Maulana in Kabir Khan’s Bajrangi Bhaijaan (2015).

In his first Pakistani film, Nabeel Qureshi’s Actor in Law, released in September 2016, Puri plays a lawyer whose free-spirited son, played by Fahad Mustafa, wants to be an actor. Puri returned in August to promote the film, which has done well at the box office. At the Pakistan Film Festival in New York last month, it drew a standing ovation from the packed Asia Society auditorium.

“#OmPuri a legend to work with & a man with his humble & loving nature won the hearts of people across the border. May his soul RIP”, tweeted Fahad Mustafa (@fahadmustafa26).  In another tweet he shares a photo of himself saluting Puri, with the comment: “This is how i remember you sir”Top of Form

This is how i remember you sir … pic.twitter.com/HZivHcvUTY

Director Nabeel Qureshi, whom Puri fondly termed as a hard taskmaster, told Aman ki Asha that he had spoken to the veteran actor – “such a gem of person” — just the other day to catch up.

A still from Bajrangi Bhaijan

Working with Om Puri was “like a dream come true. Getting a chance to work with such a legendary actor in just my second film is an honour for not just me but all the co-actors as well. He’s very humble, down-to-earth and very professional. I always considered him as an international actor not just Bollywood actor”, Qureshi told us soon after the film was released.

“We lost today who we found too close to our hearts, a man who was all love and peace ..dont have the courage or words to say farewell.

Rest in peace …. Sir OM PURI jee, you will continue to live in our memories and our hearts always!!!” he posted on Facebook with a photo.

The picture is from Puri’s room at the Pearl Continental Hotel, after completing the shoot in March. “He was always very caring and kind with us,” said Qureshi. “I was tired and he just put me in his bed and we were joking around.”

Pakistani actor Humayun Saeed, who plays a cameo role in Actor in Law as himself, tweeted (@iamhumayunsaeed): “A fine actor & a courageous human being; Om Puri stood his ground and relentlessly worked for peace & harmony in toughest times #RIPOmPuri”.

While filming in Karachi, Puri told reporters: “I really like working in Pakistan, because I’m pampered a lot here. I keep responding to people’s salaams from morning to night. So many people want to throw me a dinner party at their house. And everyone wants a selfie.”

Famous versatile Bollywood and Hollywood actor Om Puri will always be remembered for his efforts to support peace between India and Pakistan pic.twitter.com/m9snWfp0gs

“A true champion of India-Pakistan peace and a warm-hearted Punjabi in Mumbai is gone,” comments Pakistani academic Dr Ishtiaq Ahmed, known for his work on Partition and for peaceful relations between both countries.

Dr Ahmed observes that Puri “had been in great stress” after his remarks following the attacks in Uri, Indian-administered Kashmir, in which militants killed 19 Indian soldiers.

The condemnable tragedy led to a freeze in relations that had just begun to thaw. India pulled out of the upcoming SAARC summit in Islamabad. A Hindi film producers’ association imposed a ban on Pakistani actors. Several Pakistani actors in Mumbai were forced out of India. Pakistan retaliated by banning Indian films.

Like his friends Naseeruddin Shah and Mahesh Bhatt, Om Puri took a courageous stand. “Pakistani artistes are not working illegally here and if they are sent back, Indian producers, who have signed them for their films, will suffer heavy losses,” he posted on his Facebook page.

About the Indian army’s “surgical strikes” in Pakistan, he added, “When the government is taking an action, we all should stay quiet. It hardly matters if we send back the artists from Pakistan, who are working here, or let them stay. I have been to Pakistan six times and have met people from all strata. I have always received love and warmth. If the Pakistani actors leave the projects they are doing here in middle, then people in India (filmmakers) will also face financial loss.”

During a heated, live television debate, Puri asserted that he was a “working man” (mazdoor admi) and refused to prove his “patriotism” by saying he would not work in Pakistani films.

As for soldiers, “Did we force them to join the army? My father was also in the army… We are proud of them (soldiers)… I am asking you: Do you want India and Pakistan to become Israel and Palestine?”

A section of society promptly termed him ‘unpatriotic’ and harangued him via the media and social media – just as their counterparts in Pakistan do when anyone goes against the “nationalist” narrative.

Puri apologised publicly for the remark, even going to a village to meet with the bereaved family of the Indian soldiers and seek their forgiveness. It is clear that his humility and courage, compassion and connection with the people stems from a longtime commitment to social justice and human dignity.

Puri was filming for Kabir Khan’s upcoming film ‘Tubelight’ starring Salman Khan. The last time the three worked together was in the hugely popular Bajrangi Bhaijaan.

He will also appear posthumously in Gurinder Chadha’s Viceroy’s House, due for release in March 2017. The movie, showcasing the last days of the British Raj and India’s independence movement, stars Hugh Bonneville as Lord Mountbatten, the last viceroy of India.

Fellow actor Nawazuddin Siddiqui (‏@Nawazuddin_S) tweeted a tribute terming Puri him the best actor in the world and an “inspiration 2 me & many”. They were to work together in Nandita Das’ upcoming film Manto.

He leaves a legacy of humanistic and compassionate values and peace aspirations the world needs today more than ever.