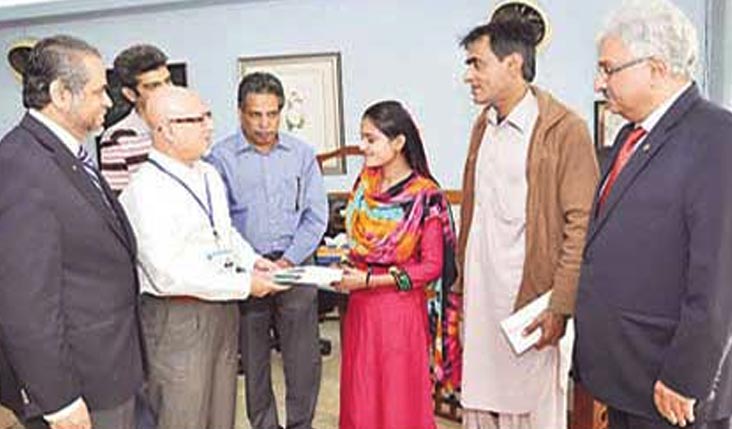 Karachi :A year ago, 16-year-old Kiran Soomro could not take two steps without losing her breath. She suffers from a congenital heart disease – she was born with a hole in her heart. It makes small things like sitting up and drinking water a laborious task. Now she can climb three flights of stairs without support.

“I came to know about it when I was 14 years old. I was climbing the stairs to my class when I fainted. The doctors said I had a hole in my heart when I was a baby. Now it had gotten too big to be operated,” recalls Soomro.

The eldest of six siblings whose father sells potato chips for a living, Soomro could not afford a surgery which costs several hundred thousand rupees. But she wanted to live. She gave interviews to several Sindhi media outlets, but in vain.

Help arrived from a Sindhi classical dancer from the country next door. Nitu Jiwnani was performing at a festival in Dubai. There she met one of Soomro’s neighbours who told her about the girl.

India is known for expertise in open heart surgery. Jiwnani posted a picture of the girl on the Aman ki Asha (AKA) Facebook page with the message: “I am an Indian and I want to help a Pakistani girl.”

The response was tremendous. The Indian-Pakistani diaspora got together and raised $7,000. The Rotary International connected the girl to a team of doctors in India and sponsored her medical treatment.

Meanwhile, the Jang Group in line with its AKA campaign helped the girl with her visa and travel expenses. An application was sent to the Indian High Commission. “They arranged a visa within a day on one condition that the AKA will help treat more cases of children with rare diseases,” said Shahrukh Hasan, the group managing director of Jang Group.

The Pakistan International Airlines waived off the entire cost of the ticket to India for Soomro, her father and her mother.

The girl has just returned from a six-month treatment in Delhi. “My lungs had developed a problem due to the hole in my heart. Now that my lungs are well, I can get my heart treated,” she said.

Soomro is leaving for Bangalore on Monday for a major surgery. But the young girl is excited. “I will get well soon. Then I will get admission to the school again. When I grow up I will join Aman ki Asha, or become a reporter or a doctor. I want to help people live a better life,” she said.