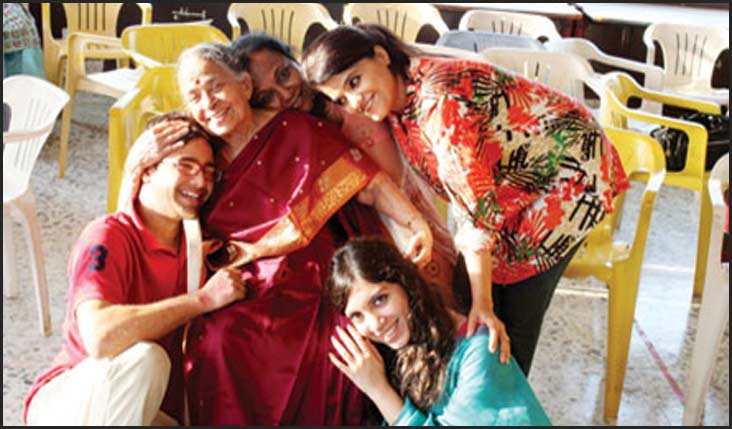 A family away from home, at Dignity Foundation for senior citizens, Mumbai

I wondered about my identity as a Pakistani Hindu and what I had in common with our much-detested neighbour. Studying in India later, I found that friendships transcend borders

Identity is a dynamic phenomenon that continues to surprise me with the innumerable forms it takes. Born a Hindu in Pakistan, one occasionally encounters a surprised face followed by: ‘So when did you migrate from India?’ Other remarks ensue. A school-friend of mine still affectionately calls me Hindu Bindu. As a child I wondered what my identity is, what it means to be a Pakistani Hindu and what I had in common with our much detested neighbour, India.

In 2006, I got admission to the Tata Institute of Social Sciences in India (TISS) for an undergraduate program in rural development. Even before the Indian Embassy in Islamabad responded to my visa application, my family had started bidding me farewell. No one thought that they would deny the visa to a Hindu. But we were naively mistaken. My identity as a Pakistani preceded who else I might be.

It wasn’t until 2011 that I was able to go to India – not for undergraduate but for postgraduate studies at TISS. By then I had studied in North Cyprus, a bifurcated island that many countries still do not recognise. Some experiences in Cyprus profoundly contributed to my understanding of identity.

First, I realised that states too face identity crisis. Second, I was the first and only Hindu to study there. What surprised me the most was that many Turkish Muslims did not know what a Hindu is, except for a faint association with Bollywood movies. That is when one significant aspect of my reality was completely challenged. Here in Pakistan, the discourse gives the impression that Hindus and Muslims have perennially remained at daggers drawn; in another part of the world, a major Muslim-dominated society doesn’t know what a Hindu is. So, what makes this conflict so innate for us?

This dilemma reminds me of an encounter I can never forget. In 2010, I had volunteered for a summer camp with refugees from Swat. At the end of the three-day camp, as we about to leave, one of the students shook hands and asked my name. Our hands still clasped, I saw disbelief flicker across his face. After a stunned silence, he said, ‘Aap jhoot bol rahe ho – aap Hindu nahin ho sakte‘ (You’re lying – you can’t be a Hindu). When he realised I wasn’t lying, he walked me to the vehicle and saw me off with a smile.

What made him think the way he did, and why did he continue to hold my hand and bid me farewell after learning that I was a Hindu? These questions and more simmered in my mind as I crossed the border and found myself on Indian soil the following year.

My first few encounters with Indian students were quite memorable. During introductions, we’d shake hands and exchange names. But it was when we said where we were from that I received some of the most interesting responses. One student paused for a couple of seconds and then left my hand and gave me a hug!

“TISS is life-changing,” said an alumnus at the university’s 75th year celebrations. He was right. My experiences over two years there drastically altered my perceptions.

Looking over my journal entries from that time, I found this: “I have started thinking a lot since I have come to India: my caste, purpose of my education, …the more we earn the more we exclude ourselves from the rest, how conveniently we have built our comfort zones either on the basis of our superficial identities or premised on our unspoken class.”

A core facet of social work education at TISS was fieldwork, including travel and new experiences – I was placed at a slum and a senior citizens foundation, with under trial prisoners and in an observation home. Over two years, this led to reflective exercises, based on profoundly enriching experiences that set me thinking in many directions.

Particularly enriching was my encounter with the children in the observation home – ‘bachon ka jail’ (children’s jail). Housed in a 1936-built prison, most juvenile inmates had been brought in not for breaking the law but under the ‘care and protection of children act’. Society makes distinctions through labeling that can have negative consequences when these labels become permanent and are used to discriminate. The identity of the youngsters inside was stripped to numbers. When we had lunch with them behind their bars, it is indescribable how happily surprised they felt.

On July 13, 2011 I wrote: “Today there were 3 blasts in Mumbai. I didn’t know how to react… I received phone calls from Pakistan, Canada and friends and relatives in India telling me to stay put in campus and not go out… Since I have been here I have always felt important when people are excited to discuss about Pakistan and know more. However, today when all faces were glued to the television watching the breaking news unfold, I suddenly felt strange and a bit worried. Today I wanted to be invisible and not be looked at as a Pakistani… No one said anything! Yet I felt a bit scared as well as conscious of my actions as to how should I behave as if people had eyes on me…”

I stayed that night in my friends’ room on campus. This was not the only time I felt uncomfortable with my identity. There were challenges; faces unwilling to accept me as a tenant, untimely calls by CID officers, travel restrictions, and remarks from the local police – “How far do you stay from Kasab’s residence in Karachi?”

Thankfully these were not the highlights of my time in India. Friendship is a unique relationship. Fortunately, no religious text or its widely accepted interpretation has made friendship an unlawful act between individuals adhering to different belief systems. Friendships transcend all borders, material and immaterial. That is what I experienced – amazing friends beyond border, caste, class, region and age. We played Czech music, celebrated Holi and Assamese festivals, disputed issues over gup shup sessions, enacted street plays to voice our disdain for identity politics, recited Sufi kalam and cheered openly for our teams in the cricket duels.

My friends and I also conducted salsa sessions with senior citizens at Dignity Foundation – to my surprise they danced enthusiastically. I made friends with two amazing people, both young at heart and firm on faith. They attended my graduation ceremony on behalf of my parents, and sent me back to Pakistan with the words, ‘Remember you are the architect of your life

With these experiences and more, I returned to Pakistan with many fond memories, new relationships and observations.

I wanted to explore Pakistan the way TISS got me to explore India and to an extent myself. What better way can there be than interacting with the youth of the country, at the age when we learn so much about our identity and all that becomes an essential part of us.

At a class on culture recently at a government school in Karachi, we asked students to draw cultural x-rays. They had to sketch an outline of their body and write on the outside the aspects of the culture visible to others, and inside write the immaterial and invisible aspects. While I was drawing my cultural x-ray on the board, one student spoke, “Aap Muslim lagte ho. Lekin bura na mano to ek baat kahoon. Aap ke naam se lagta hai, aap Hindu ho – aap kaun ho?” (You look like a Muslim. Don’t mind this, but from your name you appear to be Hindu – who are you?)

Encounters like these make me realise the importance of ‘value education’, especially during these times when identities are exploited and used to discriminate. Imagine how peaceful the world would be if we could view preconceived ideas of identity with more fluidity, and allow our friendships with diverse people to shape our own connections and way of life.

Ajay Pinjani works at Citizens Archive of Pakistan. He has a Bachelors in Political Science and International Relations with a High Honors from Middle East Technical University, Turkey. He did his Masters in Social Work from the Tata Institute of Social Sciences, Mumbai, with his thesis on “Sindhi Sufi Poetry in contemporary Pakistan; meeting of tradition and modernity”. He was awarded Best International Student, and has been active in college dance and theatre groups.
Email: [email protected]