From the shores of Mumbai to the mountains of Chitral: Let’s exchange peace on New Year 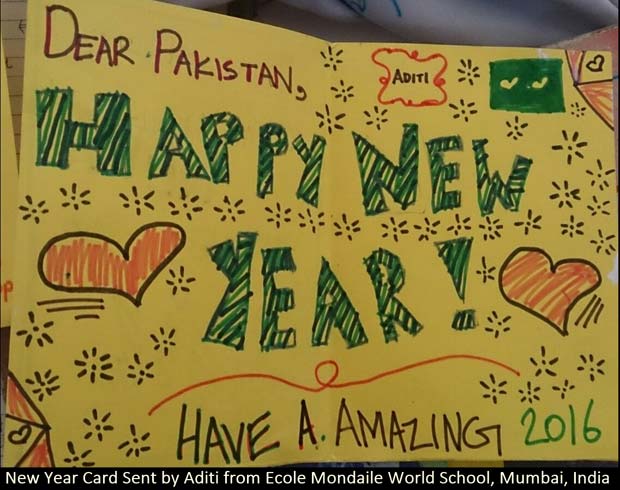 As she entered the classroom, Zaibun Nisa Hussain, teacher at Langlands School & College, Chitral, Pakistan, waved an envelope in the air.  The students knew what it was, and the room came alive with excitement. They could barely wait for her to open the package and pass out the contents, says the youth peace group Aaghaz-e-Dosti.

Their New Year cards had arrived…  from India – from the country they had until then known as “enemy”. Students of grade 7 from Ecole Mondiale World School, Mumbai, India participated in a program called ‘Let’s Exchange Peace on New Year’ with students of grades 7 and 8 at Langlands School & College, Chitral, Pakistan.

On Dec 31, the Langlands students were seen devouring the cards, sent by ‘friends’ from an ‘enemy’ country, with intermittent shouts of, “Wow, my cards is so lovely. You know what is written in my card?”

The school in Chitral is named after Maj. Geoffery Douglas Langlands who landed in India in 1944 as part of the British army. When powers were divided in 1947, he moved to Pakistan and now has retired after a long teaching career including 24 years at the Langlands School.

Zaibun Nisa teaches Mathematics and Physics to grades 6 – 12 there but her goal is to further develop a sense of being global citizens in her students. “No matter which side of the border we are, we shares values of and desire for peace, love, blessings, and greeting.” she said.

She says that handmade greetings may be a thing of the past to many people, but for the learning and happiness they bring, she wants to continue to use the idea in her classroom.

Ecole Mondiale sent about 40 cards to Langlands extending the students’ greetings their peers in Pakistan on New Year and also sharing their hope for peaceful and friendly relations.

Arya, a student of Ecole Mondiale wrote in his card, “I wish you a very merry Christmas and a very happy New Year. There is so much love from India. I am very proud to call you my friends.”

“Inclusion of peace initiatives in school related activities and curriculum by extension can go a long way in shattering stereotypes and paving a path to build cross border friendships,” says ESL specialist, English and theory of knowledge (TOK) teacher at Ecole Mondaile World School, Tulika Bhatija. “New Year greetings are a step towards fulfilling a dream where children no longer feel the burden to take forward the legacy of hatred.”

The students from Langlands will reply to their friends from Ecole Mondaile in early January.

Devika Mittal and Aliya Harir, conveners of Aaghaz-e-Dosti, have expressed the hope that this exchange of cards will help to bridge the gap of miscommunication and misconceptions and instill in young hearts a commitment for peace and friendship between India and Pakistan.

This piece is based on a press release sent by Aaghaz-e-Dosti.