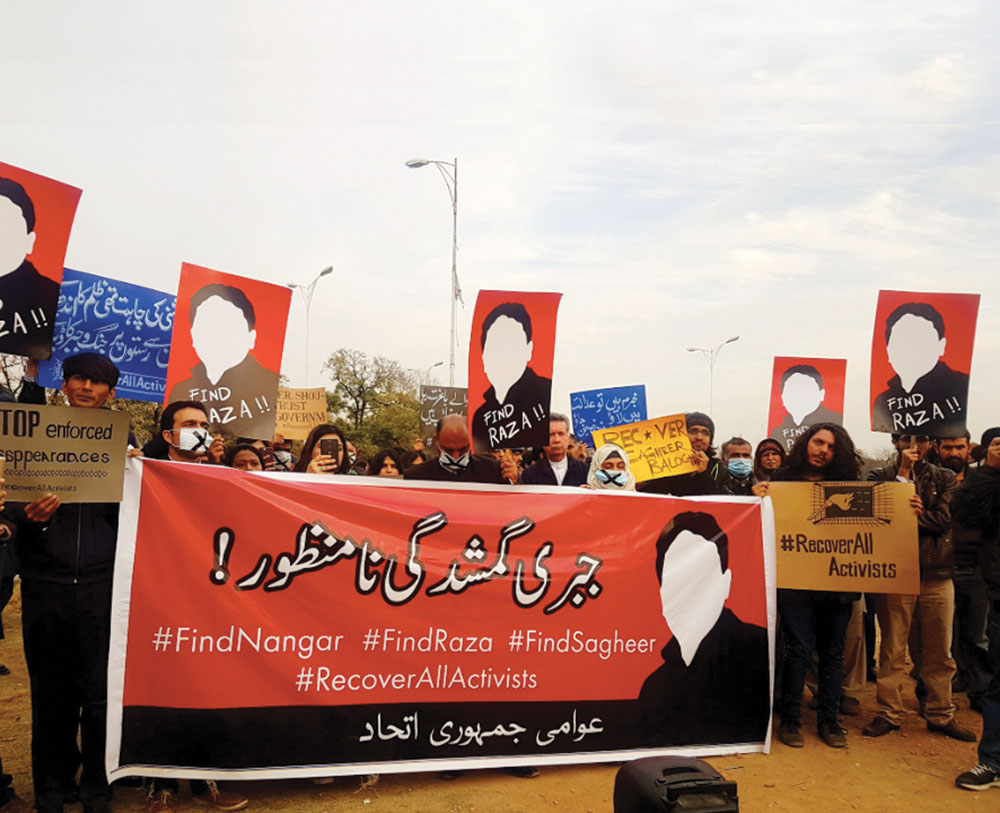 Rallying for Raza Khan before a commemorative banner of Asma Jahangir, Raza's counsel and a vocal proponent of peace with India.

The tiny dents that young activists like Raza Mahmood Khan make on the narrative of violence and coercion are precious, and worth preserving. Hopefully Raza will be produced in the Lahore High Court soon

Violence dominates the political narrative in Pakistan. We have an ‘eye for an eye’ approach with our neighbours. Death of soldiers, attacks around the Line of Control in Kashmir, military operations in different parts of the country are routine. There is very little said against this violence and very few people are willing to pay the price for opposing this narrative. Those who propose that the military perhaps uses militancy to further its own agendas do so at  grave risk to themselves.

Today, ‘peaceniks’ are rarely respected across the world, but they are especially looked down upon in India and Pakistan. They are rebuked or belittled as ‘doves’, ‘softies’ and sometimes even as ‘anti-national’ agents of foreign intelligence agencies. On the other hand, celebrities and politicians promoting coercion and violence gain immense popularity.

Raza Mahmood Khan is a peace activist based in Lahore, who has been missing since early December last year. One of his main activities was going to schools to collect children’s artwork for the calendar of his organisation, Aghaz-e-Dosti. The calendar carries the artwork of children from India and Pakistan.

Raza has a group of close-knit friends who are attempting to keep the issue of his disappearance alive on social media and elsewhere despite many threats. They believe that the release of the bloggers last year was the result of public pressure.

Raza, originally from Kasur, has been working and supporting his family since his matriculation, and did his post-graduation from Punjab University. As is often the case with missing persons, he too comes from an underprivileged background and his family isn’t very resourceful.

Raza also organised cultural exchanges between Indian and Pakistani students through Skype. Dr Anita M Weiss, a sociologist who has been researching Pakistan for decades and attended the calendar launch of Aghaz-e-Dosti this year, said that she was once present during such a ‘virtual’ cultural exchange in a school. Children on both sides of the border asked each other about their favorite sports, foods and actors; when the answers were very similar –everyone cheered!

They were surprised to learn that they not only share the same language, but also likes and dislikes. This is also the logic under which the Fulbright Fund and scholarships were set up – Senator William Fulbright of Arkansas thought that countries do not go to war with each other if their people share a strong cultural bond.

Some scholars lament that since the partition generation is now dying, the younger lot is unaware of the common history and syncretic past of India and Pakistan, as well as Bangladesh. Therefore, unlike their grandparents often, many have a negative and rigid view of their neighbours with whom they see no similarity or connection.

Therefore, activists such as Raza go to schools in different parts of the country and arrange such ‘meet-ups’ which break the monotony of aggression between the two countries. Such events not only challenge the mainstream narrative but are also meant to help the children become lifelong friends through letters and drawings. The idea is that these children will remember their friends on the other side during any armed conflict in the future.

Raza has a group of close-knit friends who are attempting to keep the issue of his disappearance alive on social media and elsewhere despite many threats. They believe that the release of the bloggers last year was the result of public pressure. But time seems to be flying and the well-wishers are now getting increasingly worried.

Two of Raza’s closest friends said they have trouble sleeping and often have nightmares. Another lamented that they now have to curtail their activism for peace. Not only because Raza was the main convener in their organisations but also because now all that energy is being spent on recovering Raza. At times, they even feel guilty for continuing with their jobs and not being able to focus full-time on bringing back Raza. They are all full of stories about Raza – his love for children, passion for music, fondness for theater and commitment to peace.

Raza is a neither very visible as an activist nor very well-connected with the Pakistani elite. And this is precisely what has made many well-wishers of peace and freedom feel stressed.

A habeas corpus writ was filed soon after Raza disappeared. Raza was not produced in the court, nor were his whereabouts revealed but officials do assure his friends that “he will return”. On February 21, there was another hearing but Raza’s case didn’t even appear on the list of cases being heard that day. The next date for hearing is fixed for March 7.

Raza’s legal counsel and a well-known friend of the ‘missing persons’ Asma Jahangir recently passed away. Some people worry this is a serious blow to the case against enforced disappearances. Even though her law firm and junior lawyers are committed to her causes – no one is as visible, vocal or well-known as Asma was.

Things have worsened in India as well. The Bharatiya Janata Party government has adopted a very aggressive stance towards Pakistan after the Pathankot attack in January 2016. Any cultural exchange with Pakistan through cricket and films has been restricted. Surgical strikes are presented by the sitting government as an achievement. Those who have a soft stance on Pakistan in Indian politics and media keep their voices hushed.

The Indian mainstream narrative has changed for the first time since the Kargil War and it was probably not this extreme even during the war.

Along with the ceasefire violations and war-mongering narratives, a general suspicion of Muslims seems to have taken root in Indian society. Today, people like Raza who work for peace are rare, and hence even more important, in both the countries.

Both India and Pakistan have a fast-growing nuclear piles of weapons. On top of this, a ‘tit for tat’ approach towards each other dominates the popular narrative in both countries. Hence, a population of 1.5 billion is at risk. The tiny dents that young activists like Raza make on the narrative of violence and coercion are precious, and worth preserving.

At the end of the day, only a few activists such as Raza Mahmood Khan are what we are left with – those who are isolated, vulnerable and moving against the tide to save one of the oldest civilizations in the world – and they pay a big price for it. At the end of the day, Raza is still missing while designated militants and terrorists are roaming free. At the end of the day, the family and friends of ‘peaceniks’ must always live in horror and bear everything with great dignity and patience.

Hopefully this will change and Raza will be produced in the Lahore High Court soon.