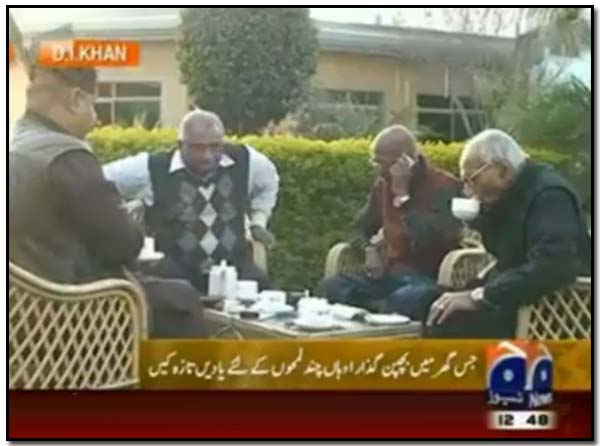 Old friends reunite with their land of birth: Still from the Geo TV report by Saeedullah Marwat, Oct 27, 2015

Whatever the governments of India and Pakistan do, the people of both countries share an emotional bond that is hard to break.

A report by Geo TV’s Saeedullah Marwat with cameraman Qais Javed, on the visit of Premnath Kripalani, former cricket commentator, 83, to his childhood home of Dera Ismail Khan along with two other friends Dr. Ratra, and S. P. Malhotra from Dera Ghazi Khan and Jhang.

Kripalani recounts his visit to the house where he had spent his childhood and how it brought back memories, including of the scar left by by scalding milk as a child.

When asked about having to leave the soil that he was born into, Kripalani said, “You cannot fathom the grief… It is not ever describable by words”. He said that coming back made him feel young again, like he is 20 years old again.

“We have been treated with so much love and kindness,” said Dr Ratra. “I am going to tell our Prime Minister, we are the bigger country, let’s open our hearts, open the borders, let the people meet, don’t put any obstacles in the process. Give country visas, not city visas.”

Kripalani also spoke about the dwindling of the Saraiki language in India. By another 10 or 20 years, he said, it will have received a huge setback.

Partition survivors are now on their last legs. Will the love they have for their place of birth transfer to the younger generation or will national politics and policies that stifle cross-border people-to-people contact prevail?