‘Ghulam Ali has been and will remain one of us’ 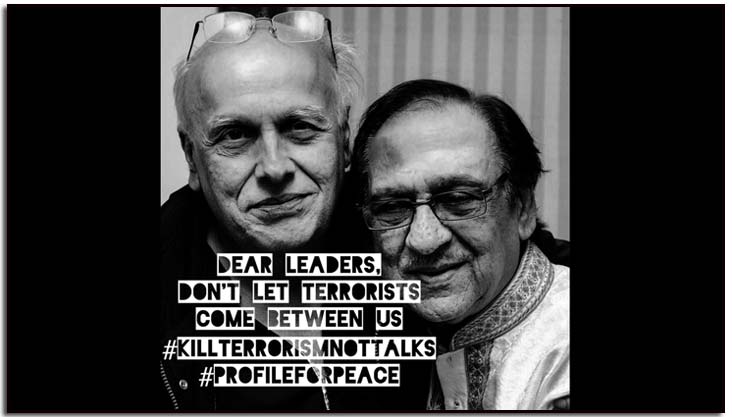 “Never have I seen a ghazal singer performing in front of 15,000 people this way with the Chief Minister of a state personally overseeing the whole event”

Director Mahesh Bhatt had his own play to present in Kolkata on January 12. Yet he chose to drop by at the Ghulam Ali concert that evening. The reason? “It was that important a show for me. Never have I seen a ghazal singer performing in front of 15,000 people this way with the Chief Minister of a state personally overseeing the whole event. It was Mamata’s (Mamata Banerjee) day,” he said.

Fasle aise bhi honge yeh kabhi socha na thaa… When maestro Ghulam Ali began his concert with this ghazal, for many it triggered an emotion beyond the realm pangs of separation of the beloved. The walls that borders erect and the ‘fasle’ that political rhetorics create were obvious connections that came to mind if it digressed temporarily from soaking in Ali’s rendition. Yet there was assurance.

For Ali’s Kolkata visit, his decision to transcend petty political barriers and come and perform in India only reaffirmed the faith in the fact that music truly transcends all divides. Ali’s concert at the Netaji Indoor Stadium that was organised by the West Bengal Minorities Development and Finance Corporation and the thundering applause to it was proof enough that ‘aman’ is not just an ‘asha’. In the Bengal of chief minister Mamata Banerjee, whom Ali referred as ‘Saraswati’, it is a reality too.

Bhatt, who couldn’t stay back for the entire concert because he had to rush to Science City to present his own play, said, “The idea of the concert is extraordinary. On the birth anniversary of Swami Vivekananda, to have a concert with the Pakistani ghazal singer who couldn’t do a show in Mumbai is commendable. This is the first time I met Mamata Banerjee in person and I saw in her an earnestness to foster cultural ties with Pakistan. What Vivekananda preached through his words, Mamata has done it in reality.”

Recalling the embarrassment he had felt when the maestro’s concert was cancelled in Mumbai, Bhatt said, “It was such an awkward moment for us. I had personally called him up and apologised for it. I don’t know if any other state can do this programme or not but I am extremely happy that Mamata Banerjee has done it.”

Mahesh Bhatt and Ghulam Ali at the concert venue.

The maestro had already warmed up by the time Bhatt left the auditorium. If ‘itni muddat baad milein ho’ got the audience longing for more, ‘dil mein ek lahir si uthi abhi’ the moment he sang ‘hum ko kiske gham ne mara’. And as the maestro sang one ghazal after another, the audience sat ‘chupke chupke’ appreciating every ‘harkat’ and ‘sher’ that the icon presented.

Of course, their ego was pampered since before the concert Ali had praised them saying he considers the Kolkata audience the best in the world. And they sat tight in their seats appreciating a rare ghazal like ‘phir kisi rehguzar par shayad hum kabhi mil sake/ magar shayad’.

Director Arindam Sil was so overwhelmed with the show that he didn’t hesitate to call it a “historic” one. “It was simply outstanding,” said director Raj Chakraborty.

The maestro’s son, Aamir Ali, also took the stage and sang the first stanza of song he had re-composed in the album titled ‘Generations’. “Twenty six years ago, my father had composed the ‘Naina tujhse lage’ for Asha Bhonsle. Now I have composed this as ‘Naina re naina’,” Aamir said before singing the first stanza of both the versions. Then, he sung a modified thumri before the father-son sang ‘Chupke chupke’.

“Never have I seen a ghazal singer performing in front of 15,000 people this way with the Chief Minister of a state personally overseeing the whole event. It was Mamata’s day” – Mahesh Bhatt. Photo: Mamata Banerjee Facebook page

The crowd erupted in a thundering applause as the ghazal reminded them of their personal moments of tiptoeing ‘nange pao’, the ‘chori-chori’ meetings and the ‘aashiqui ka woh zamana’. Gliding down octaves, the father-son finally created a ‘hungama’ of sorts. As they sang, someone in the crowd shouted: ‘kya baat, jio chacha hazar saal’.

Producer Shrikant Mohta, who was also in the audience, said, “There is just one word that I have to use to describe this show: superb’.” The meastro might have sung ‘hum tere sheher mein aaye hai musaffir ke tarah…’ but when the concert came to an end, Kolkata wanted to say that his visit was anything but that of a ‘musaffir’. Way beyond the discourse of border tensions, terror strikes and the ‘amra-ora’ politics, Ghulam Ali has been and will remain one of us.

Ghazal maestro Ghulam Ali mesmerised Kolkata with his golden voice in “Milan Utsav 2016” at Netaji Indoor Stadium today
We all are overwhelmed.
Our gratitude and sincere regards to him.
Our best wishes to his son Aamir Ali who also performed on the occasion.
Our best wishes also to Mahesh Bhatt and Ustad Rashid Khan who also graced the
event.
Bengal is proud.