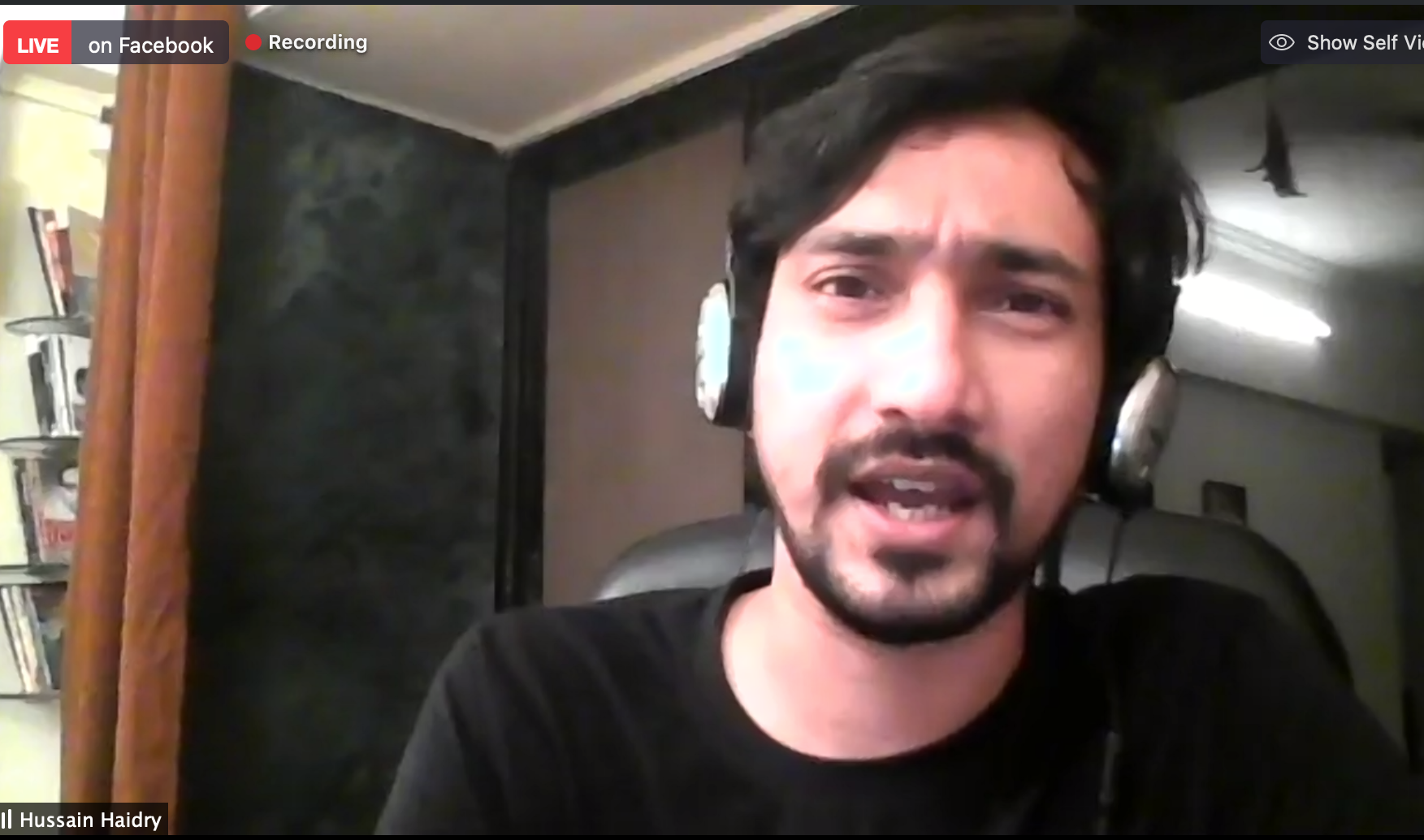 Hussain Haidry: They have killed people and separated us

By Neel Kamal in Bathinda

Going ahead with their campaign for the peace process to continue through people-to-people contacts between India and Pakistan, the Pakistan India Peoples Forum for Peace and Democracy (PIPFPD) held the third virtual edition of Guftgu band na ho (let talks not stop) late Saturday evening.

This is part of a series which began at the end of May this year. A recent session focused on the shared history of the region while commemorating the 113th birth anniversary of freedom fighter Bhagat Singh. Discussions have also focused on the common problems of the people of South Asia through conversations and cultural expressions involving youth from both the countries.

On Saturday, Oct. 31, progressive thinking but diverse community members gathered online to bring together political views of young socio-political-cultural activists, co-moderated by Aabida Ali in Karachi and Evita Das in Delhi. The discussion focused on how to ensure a continuity of conversations towards reimagining the future.

Speakers commented that borders and vested national interests might try to stop them from speaking but digitally and in spirit they will continue to work together for progress. The policies of the state have been inflicted upon young minds and bodies but the voices of alternative viewpoints being put down will never be silenced.

In the name of national borders, there have been killings, families torn apart, and violence perpetuated. These efforts to take spaces away from us testify to the fact that our quest for peace is vital, said the speakers.

Activist Naghma Iqtidar in Karachi said that continuous attempts are made to stifle progressive voices. “How do we use Bhagat Singh’ voice, in times of difficulties, when people want us to fight in our countries where more money is spent on defence than education?”

“We want to share cultures across the borders. We share these already. Open the trade routes and let us thrive. We do not want to smuggle. Release us from these colonial shackles”, said the peace activists.

Hussain Haidry, one of the voices at protests against India’s controversial Citizenship Amendment Act

(CAA) recited poems about the need to keep speaking “or we end up being mute spectators”. Sharing his poems about sponsored violence he said, they have killed people and separated us.

Those who have partaken in such scale of violence, now give us sermons about the future, he added. He used the narrative of the oppressor which takes over, erases and dismisses the voice of the oppressed in his poem, Hum likh nahi paye (We could not write).

Writer, poet and civil rights activist Dr Banojyotsna Lahiri said that during protests against CAA voices from margins and oppressed were emerging and gaining courage. Voices from linguistic minorities were also emerging, which is as it should be.

Documentary maker Azhar Shan in Karachi joined with his harmonium, sharing songs of peace, cooperation, love and a shared sense of togetherness across the borders in India and Pakistan.

Activist Madhuresh Kumar, national convener of the  National Alliance of Peoples Movements spoke about the lineage of post-colonial and liberal development which has eroded the collective strength of the working classes, in Pakistan and elsewhere. The authoritarian regimes we see now is an emergence of those failed policies, he said. He added that we are passing through very tough times but was happy that more progressive thinking youngsters are coming forward. The youth movements on the road today are teaching us to not settle for political compromises.

Neel Kamal is a senior reporter with The Times of India. Report first published 31 October 2020.

A film for the children, a message in compassion, a warning against war "Peace between India and Pakistan makes good environmental sense”