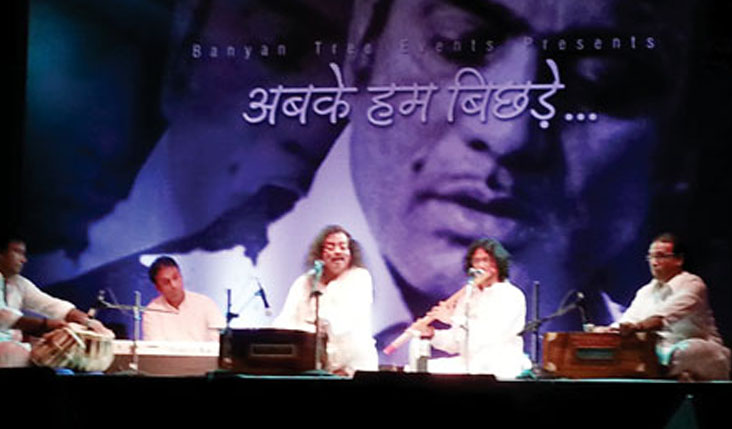 Meeting over breakfast Hari Haran said that initiatives like AKA are the need of the hour and that the singer/musicians fraternity in India is happy that the Jang Group of Pakistan and The Times of India group have joined hands for this purpose. He wholeheartedly lauded the effort to realise a dream that has been all too elusive.

He said he had been determined to attend Mehdi Hasan’s chehlum at any cost. Khan Saheb, he said, had “played a huge role in my singing life by being such an ideal throughout and continually inspired with his ghazal singing”.

Despite being such a great singer, Khan Saheb, as Haran kept referring to him, was a simple man. Once, while they were travelling in Rajasthan by car, Khan Saheb asked the driver to stop. He got out and stood near a Hindu temple for a while which he said had been there since his childhood. Looking at it brought back memories of his early years, he said.

Hari Haran was quite emotional while talking about Khan sahib, and said he would hold a non-commercial musical evening in Mumbai to pay tribute to the one and only Mehdi Hasan Saheb. The musical tribute took place on July 26, appropriately titled “Ab Kay Hum Bhichary…”.

Hari Haran’s musical career began with the two-member band Colonial Cousins, with Leslie Lewis. His solo albums include “Lahore kay rung Hari kay sung”. He has done playback singing for numerous movies such as Roja, Bombay and others.

Born in Kerala in 1955, Haran grew up in Mumbai, initially inspired by his musician parents. He has collaborated with Strings of Pakistan for “Bolo Bolo”, which was a great hit.

His agenda in Pakistan included getting a good shalwar kameez suit, requested by his son. Our meeting ended on the promise that whenever he is back in Pakistan, he will take time out for Aman ki Asha. He also said he would be happy to visit Pakistan and perform under the AKA banner.