Time to change the discourse 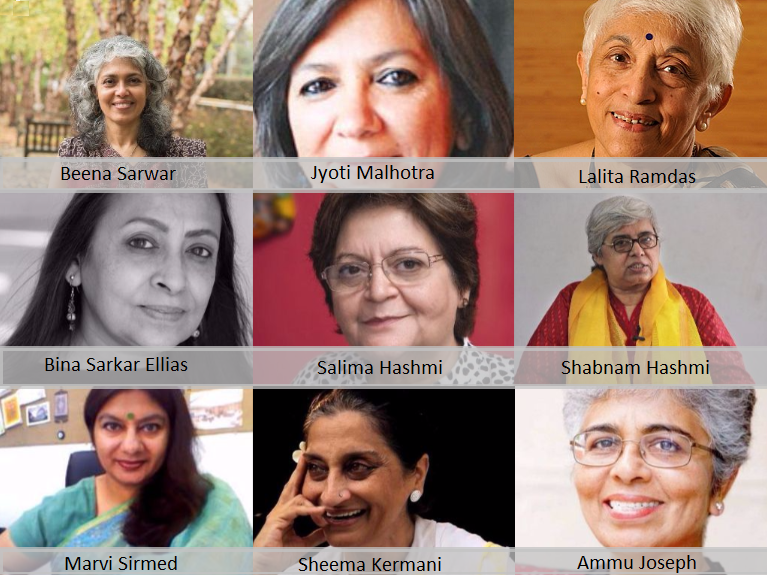 “I am a bit sick of watching the same old men screaming and shouting on my television screen when discussions on India-Pakistan relations are aired after every flare-up between the subcontinental neighbours,” writes young Mumbai-based teacher and peace activist Chintan Girish Modi in ‘Brokering peace between India and Pakistan: Women lead the way‘, a blog post​ for the Red Elephant Foundation.

Having been involved in thinking seriously about peaceful relations between South Asia’s nuclear-armed neighbours since his first visit to Pakistan in 2012, Modi (no relation to the Indian Prime Minister) argues that discussions on the India-Pakistan conflict would be more nuanced and intelligent if more women’s voices were heard – not because of being born that way but because their “choice of peace over violent extremism is a result of careful thought”.

Modi, founder of the online group Friendships Across Borders: Aao Dosti Karein, is part of a “small but strong private online group comprising Indians and Pakistanis” that is behind a peace resolution endorsed by over 800 artists, filmmakers, musicians, historians, activists, educators, writers, students, former diplomats and former army and naval officers since it was initiated last week.

“The signatures were not collected through an impersonal online campaign but through the personal efforts of group members who got in touch with not only friends, family, colleagues but also with prominent citizens of great public repute in both countries and in the diaspora,” he writes.

The resolution expresses concern over “the current rise in animosity and antagonism between India and Pakistan,” and urges “both governments and their security establishments to take all steps possible towards improving relations.”

Noting the loss of lives over the last 70 years, and the suffering of “ordinary people denied visas and those in the conflict zones, especially women and children as well as fishermen who get routinely rounded up and arrested for violating the maritime boundary”, the resolution emphasises cultural exchanges, trade, people-to-people contact and visa-free travel between the two countries, as well as the creation of “an institutionalised framework to ensure that continuous and uninterrupted talks between India and Pakistan take place regularly, no matter what.”

It calls on both sides to “renounce all forms of proxy wars, state-sponsored terrorism, human rights violations, cross-border terrorism, and subversive activities against each other, including through non-state actors or support of separatist movements in each other’s state.”

“Indians and Pakistanis who cherish the bonhomie that is born of personal interactions can sometimes forget that Kashmiris are suffering in the cross-fire, and that we need to speak up for them,” notes Modi.

The most important part of the resolution for him is therefore the demand that both governments “recognise that the Kashmir dispute, above all, concerns the lives and aspirations of the Kashmiri people, and work to resolve it through uninterrupted dialogue between all parties concerned.”

While men were involved, “the lead on this massive cross-border labour of love was taken almost entirely by some of the women in the group,” writes Modi, naming some of the most prominent ones.

“Special salaams to each one of them. I hope that someday I have the opportunity and the resources to do an extensive study of women’s role in the peace process between India and Pakistan from 1947 until today. These are only a few of the many celebrated and unsung women who have contributed to keep things sane and hopeful in a scenario that looks bleak more often than not”.

The resolution and its endorsers are testament to the urgency of changing the discourse in the India-Pakistan context. Power and solidarity to all those involved in this effort.

One thought on “Time to change the discourse”