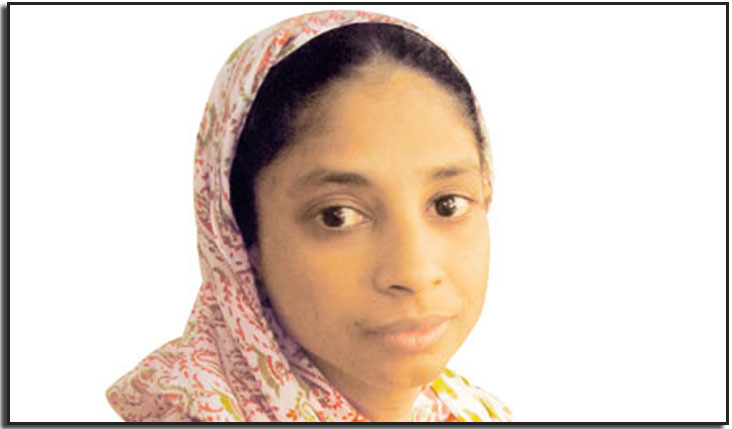 Karachi : Nobody knows where she came from, but now that she is an adult, 21-year-old Geeta wants to back home. However, she does not know where home is. Everything about her remains a mystery.

“When we first met, she did Namaste to me and bent down touch my feet,” recalls Bilquis Edhi, at whose shelter home Geeta is currently living. “That very moment, I knew she was not a Pakistani. We don’t teach our children to be that humble,” she says with a wry smile.

Edhi claims that Geeta was found on the Pakistani side of the Wagah Border in 2001, and handed over to their centre in Lahore. Ever since, the Bilquis Edhi Foundation has served as her home. Geeta speaks without the uttering a word as she is both deaf and dumb. The girl communicates through her own form of sign language, with her hands moving feverishly, as she struggles to explain her journey from her hometown in India to Pakistan.

“One of her parents had scolded her and she left the house and kept walking,” interprets Bilquis Edhi, as Geeta, sitting in a chair, continues to move her hands.

“After a long, arduous walk, there came water (a river), which she crossed on a boat and then sat on a train, which brought her here.”

The story sounds vague and patchy, but Bilquis Edhi is convinced that the 21-year-old girl, who was handed to the foundation as a child, belongs to the other side of the border. Authorities, at the time, said that Geeta had trespassed into Pakistan.

One of the signs is that she can write Hindi. Geeta grabbed a pen and paper and scribbled some details. She was called ‘Guddi’ at home and wrote something that sounds like “Basjam” as the name of her village. That is all the information she has about her life in India. It was Bilquis Edhi who gave her the name Geeta.

“After spending 13 years in Pakistan, the girl now longs to see her family. She remains depressed the whole day and gets excited whenever someone comes to see her. A few days back, a delegation of the local Sikh community came to see her, and Geeta was so delighted that her smile didn’t fade for a moment,” said Edhi.

The girl was brought to the head office in Karachi just three months ago after insisting that she wanted to go with Bilquis Edhi. “I could not say no to her. I thought she will be happy here, and from Karachi, I can approach Aman Ki Asha to help find her family in India.”

Nowadays, Geeta spends her days at the Edhi shelter home by fasting in the month of Ramazan and worshiping the Lord Shiva at a small, private temple especially made for her in a corner.

“She wanted a big statue in the house. A full-fledged temple, but I don’t have that much space,” said Edhi. But when she kept bugging me, I brought her posters of three Gods, which Geeta framed herself.”

She is a big fan of Indian dramas and watches serial after serial on Star Plus with the other girls every single night.

Edhi believes that Geeta’s recent taste of Indian dramas has made her conscious of her culture, which is pulling her back to her roots.

“Observing the other girls in the shelter home in Lahore, she used to fast in Ramazan and pray on the mattress on and off, with a recurring urge to bow in front of the Hindu gods. She tries to keep both Ram and Rahim pleased,” said Edhi with a smile.

The place 'across the border' Re-visiting history