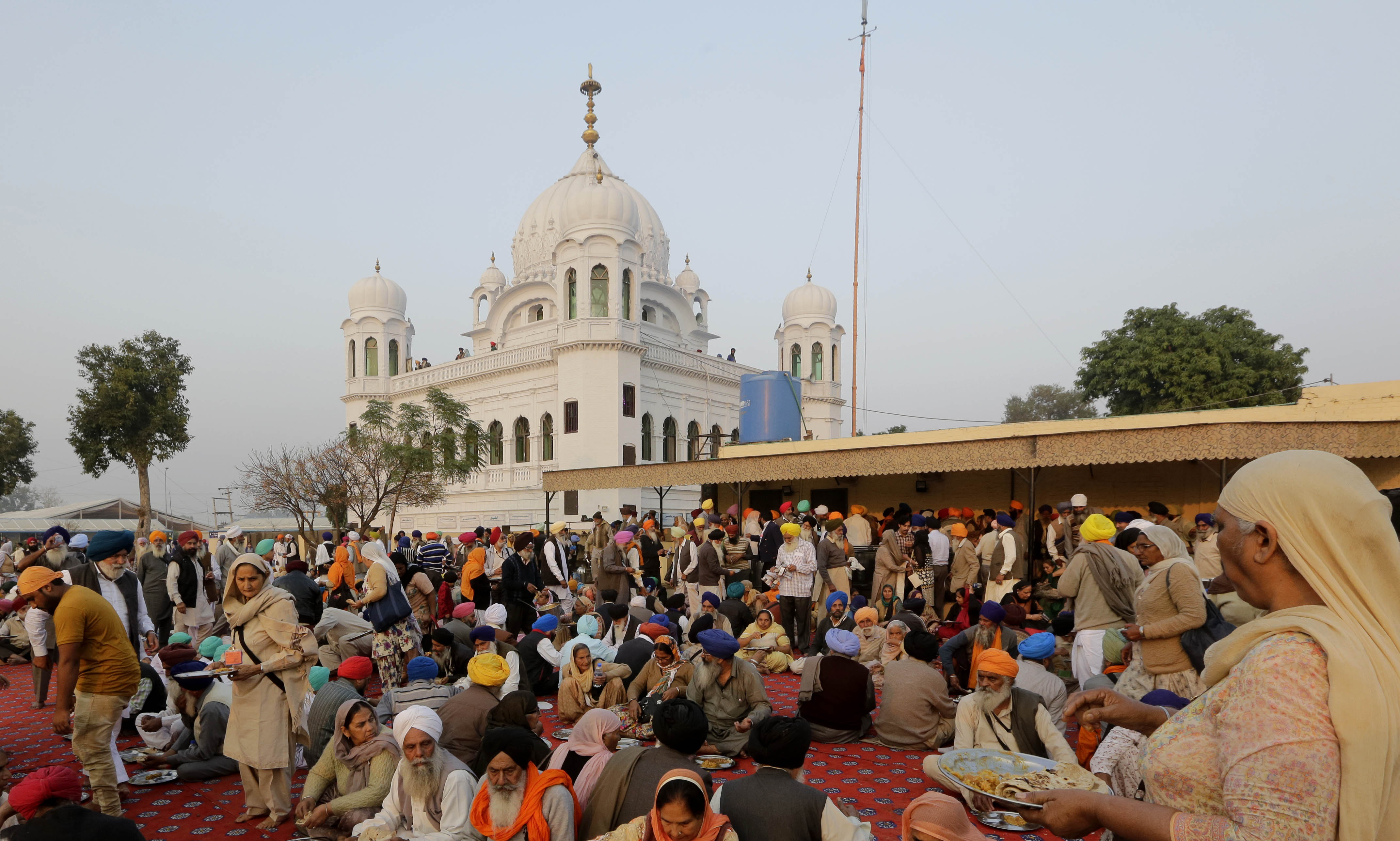 Pilgrims at Kartarpur Sahib. Photo by Rahat Ali Dar, The News on Sunday.

Thousands of Indian pilgrims witnessed the ground breaking ceremony of the Kartarpur Sahib corridor on November 28 as the Prime Minister of Pakistan laid the foundation stone in Kartarpur, Pakistan for the much-awaited visa-free corridor linking Gurudwara Darbar Sahib in Pakistan’s Kartapur to Dera Baba Nanak shrine in India’s Gurdaspur district.

On the Indian side, Vice President M. Venkaiah Naidu laid the foundation stone of the corridor on Monday.

Prime Minister Imran Khan, quoting a couplet of Muni Niazi, said that it was time to go beyond “blame game” and “point scoring”, adding, “We take one step forward and then go back two steps.”

During his address, Khan called for the past to be forgotten. Citing the example of France and Germany who have become good neighbours without any hangover of war, he said “we have certainly not conducted any massacres like they have”.

Whenever he visited India for conferences, the prime minister recounted a common refrain – that it was the military in Pakistan that did not want peace. “I want to declare,” he said, “that the prime minister, political parties, army are all on the same page [on outreach towards India].”

Khan said that Pakistan wants to “go ahead”. “We want a civilised relationship,” he added.

The Pakistan prime minister reiterated his outreach offer to India made in his first speech after his electoral victory. “If you take one step towards us, we will take two steps”.

India and Pakistan have no choice but to talk to each other, he asserted. “Both countries are nuclear armed; we have atomic weapons and there cannot be a war. It is madness for such countries to think of war. It is a foolish individual who thinks anyone can win an atomic war,” he said.

Imran Khan asserted that requirement for outreach to each other is “strong, decisive governments” on both sides. “We need determination and big dreams.”

For many Sikh pilgrims: A dream come true. Photo by Rahat Ali Dar, The News on Sunday.

The Indian cricketer-turned politician Sidhu was seated just one person away from Imran Khan on the front row. However, Harsimrat Badal and Hardeep Singh Puri sat some distance away from Khan.

In his speech delivered in a mixture of Punjabi and Hindi, Sidhu was greeted by applauses and chants of ‘bole so nihal sat sri akal’. Khan latter quipped that he did not know that his ‘friend’ was such a connoisseur of sufi poetry.

The criticism faced by Sidhu on his embrace with Pakistani army chief received a strong defence from Khan. “I never understood it. What crime did he do?”. One of Sidhu’s sharpest critics, Harsimrat Singh Badal maintained a poker face in the audience, even as the camera focused on her such occasions.

Earlier, Pakistani religious affairs minister, Noor ul Haq Qadri said that Sidhu and Bajwa’s ‘jhappi’ had created magic for launching the Kartarpur corridor. “If are more such ‘jhappis’, then our India-Pakistan problems will be solved,” he asserted.

Incidentally, Sidhu did not repeat the embrace with the Pakistan army chief. They just shared a quick handshake and a smile.

Khan added in a lighter vein that if Sidhu were to stand for any election in Pakistan, especially in Punjab, the latter would get a resounding win.

In her speech, Harsimrat Badal pointedly said that she did not have any “friends or relatives” in Pakistan. With a catch in her voice, Badal noted that she never thought that she would be able to do darshan at Gurudwara Darbar Sahib.

Around 4,000 Sikh pilgrims from India and abroad were given visa to attend the special event. They sat in rows and rows of chairs in the large white pavilion erected in the fields next to the white-washed Gurudwara Durbar Sahib.

Sixty-five-old Paramjit Singh had travelled with his friends and family from Punjab’s Nawanshahr district. After partaking of the langar of rajma and mithi chawal, he stood with two of his friends in the grounds of the gurdwara, as other pilgrims lounged on durries on the ground.

Asked whom they want to give credit for the corridor, he immediately said, “Imran Khan”. After a pause, he added, “Sidhu also.”

Most of the pilgrims had travelled from Lahore in the morning after doing the rounds of all the major gurudwaras in Pakistan in the last week.

Unlike at other towns around gurudwara Panja Sahib and Nankana Sahib, there were no banners and flags of Khalistan at Gurudwara Durbar Sahib as thousands of pilgrims and foreign visitors descended on the small dusty hamlet.

The Kartarpur corridor will facilitate visa-free travel for Sikh pilgrims to Gurudwara Darbar Sahib in Kartarpur and is expected to be completed within six months. The proposal is for round-the-clock, 365 days cross-border passage for pilgrims, with “free and readily available consular service for Indian citizens on the Pakistani side”.