Hope for Geeta, hope for humanity 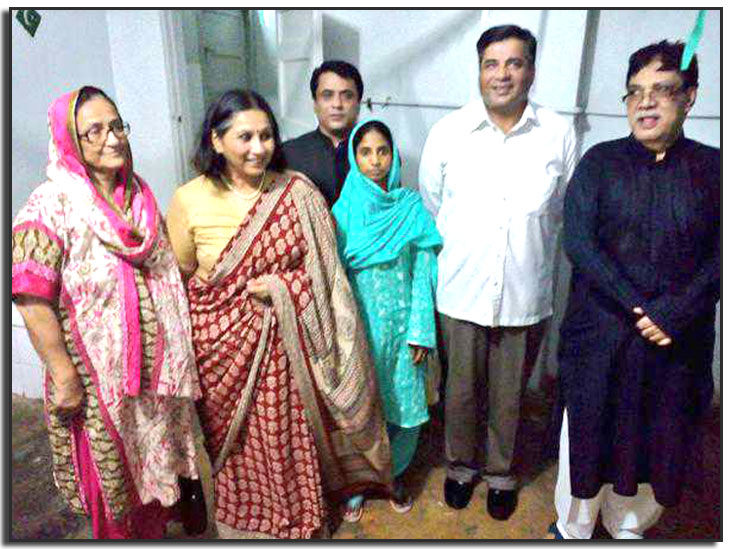 ISLAMABAD: Indian authorities on Saturday appeared optimistic that Geeta supposedly an Indian national now has greater hope to find her missing family. At least four Indian families have stepped forth to claim the young girl as their daughter.

Geeta has caught the world’s imagination, particularly South Asia’s, as people follow her story to see the outcome this hearing and speech impaired 22 years old girl who strayed into Pakistan a decade and a half ago.

About 14 years ago Pakistan’s Punjab Rangers found her on the international border and gave her in the care of the Eidhi trust in Lahore. She was later sent to Karachi in the care of Bilquis Eidhi brought her up as her own daughter.

Again on Saturday Indian Minister for External Affairs Sushma Swaraj, herself a mother left no stone unturned as she approached chief ministers of Punjab, Jharkhand, UP and Bihar to look into the claims of the four families in these states who are claiming that Geeta is their daughter.

“Gita in Karachi – During last few days four families from Punjab, Bihar, Jharkhand and UP have claimed Gita as their daughter,” Swaraj said in a tweet.

Gita in Karachi – During last few days four families from Punjab, Bihar, Jharkhand and UP have claimed Gita as their daughter.

She urged chief ministers of the said states to verify and report back.

“Geeta conveyed to Indian High Commissioner by gestures that they are seven brothers and sisters,” Swaraj tweeted.

According to Swaraj during her meeting with the Indian High Commissioner Geeta said she had visited a temple with her father and then wrote down “Vaishno Devi”.

Aman ki Asha (hope for peace, India and Pakistan) has also implored anyone who has any knowledge of Geeta to come forth and identify her. Also see the Facebook Page: Please Help find Geeta’s Home. An Indian girl stranded in Pakistan

Necessary formalities are being completed to bring Geeta back to India and Sushma Swaraj appealed to her followers on Twitter to help locate Geeta’s family.

At the Indian High Commission in Islamabad, Ranjana, wife of High Commissioner Dr T.C.A. Rahgavan told The News that she was absolutely charmed to meet the young Geeta and also happy that she had a chance to visit the Edhi Centre, where she had given gifts the children. She was full of praise for the young children at the Centre and for the couple Edhi and his wife Bilquis who have devoted their life to give humanity a helping hand. .

It should be mentioned that when Sushma Swaraj instructed her High Commissioner to meet Geeta she specially asked Ranjana Raghavan to also accompany him. It takes a woman to understand the sensitivities of young Geeta who would be more comfortable to have an Indian woman interact with her.

According to Indian media reports, earlier, a deaf-mute couple from Amritsar claimed that Geeta was their daughter. Now, a couple from India’s Pratapgarh district’s Dhamohan village of Uttar Pradesh, Ramraj and Anara Devi, have claimed Geeta is actually Savita who disappeared after she went for praying in Bihar 11 years ago.

“We have seen her pictures and seen news reports on television and are fully convinced that she is one of our six children who were last seen at the age of 9,” the couple reportedly said.

As in all such cases the world over, there are vested interests who would come forth to claim Geeta as their child. But modern medical technology and DNA testing will bring the truth as close as possible.

For now Geeta’s hopes are high. It would indeed be a happy ending if she is reunited, and more important a victory for humanity which knows no borders.

Gurus of inspiration and the fight for independence Pakistan releases prisoners; India urged to reciprocate