‘I am finally going home’: Pune granny to revisit childhood home in ‘Pindi after 75 yrs 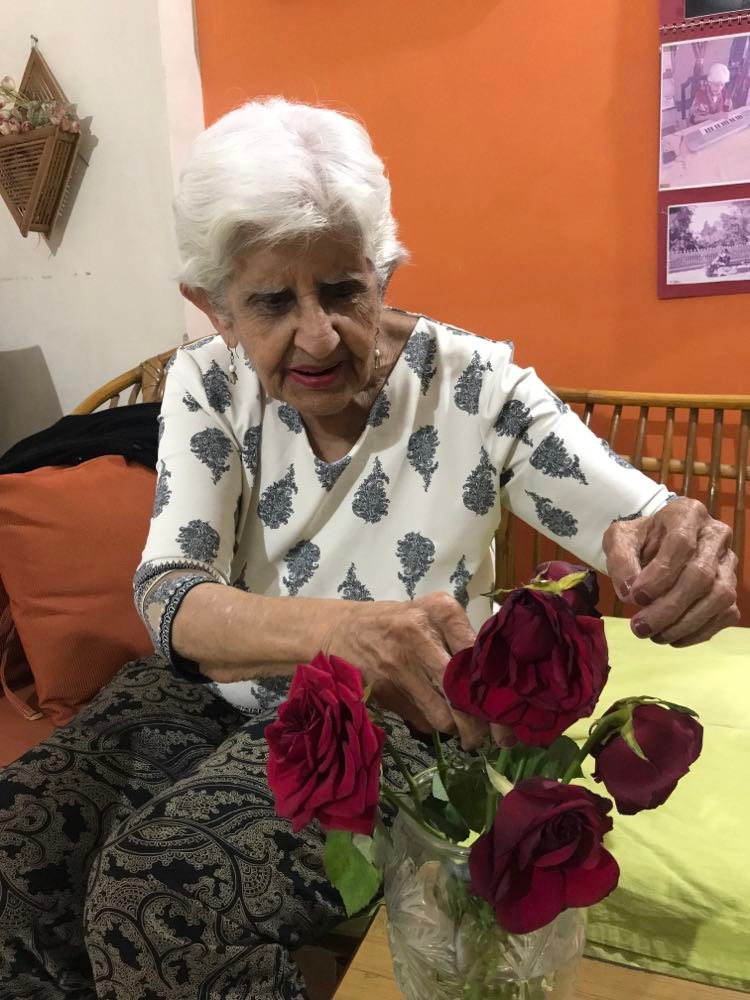 Reena Varma at home in Pune. Photo by friend and neighbour Ramadeep Sahni

In May 1947 amid fear of communal riots, 15-year-old Reena Varma left her beautiful home in ‘Prem Gali’— a lane named after her father in Rawalpindi. She and her siblings were packed off to Solan for what was supposed to be a longer-than-usual summer vacation in the hills. Her mother who joined them later was certain that they would return home once things normalised. Partition changed all that and the family could never go back home.

It is yet again the month of May, and 75 years on, Reena’s dream to see the home her father built with a lot of love and all his savings in pre-partition India is finally about to become a reality.

How 90-year-old Reena fondly referred to as Toshi (the nickname used by neighbours and friends in Rawalpindi) managed to find her house across the border is a gripping story.

Two years ago, in the isolation imposed by the ongoing pandemic, she posted about her childhood memories of her house and her desire to see it. The story of this sprightly grandma from Pune caught the attention of group member Sajjad Haider from Rawalpindi who tracked down her house and even sent her pictures and a video.

Her daughter Sonali who lives in Gurgaon helped her apply for a visa last year but her application was turned down.

Not one to get disheartened, Reena made a video at the suggestion of a Pakistani journalist. It was this that came to the notice of Hina Rabbani Khar, the minister of state for foreign affairs in Pakistan. A 90-day visa was recently issued to Reena who lives by herself in Pune.

Reena is overjoyed at the idea of going back to her birthplace. “I don’t know who lives in our house now but I am hopeful they will allow me to visit,” says Reena, who plans to visit Rawalpindi in July.

She is keen to meet all those who she came to know through Facebook such as the members of the India Pakistan Heritage Club.

Her memories of Prem Gali named after her father Bhai Prem Chand Chhibber are still vivid. She still remembers Shafi, the family tailor who sheltered her mother when riots broke out on the streets.

“She was hiding in his shop for six hours,” Reena says.

She bears no rancour, recalling her family’s Muslim friends with fondness.

“We have never carried hatred for any community. There was fear and chaos when Partition happened. Girls in our lane had to hide in an army camp for safety. It was a very sad situation but I feel only love for the what I left behind and cannot understand the hate one sees simmering in some people today,” adds Reena.

From their extended ‘holiday’ in Solan, her family moved from Rawalpindi to Solan near Shimla and from there to Ambala, Pune and finally Delhi.

As for her parents, Partition hit them the hardest. Reena’s mother could never forget her house in Rawalpindi and her father had no savings to build a new house on the small plot of land they got in West Delhi against the claim for their property left behind in Pakistan. They lived on rent in Delhi.

Remembering her father warmly, Reena shares pictures of a ‘valtoi’ (brass pitcher) and a ‘martbaan’ (urn used to store pickles) that the family brought from Rawalpindi. These now hold flowers in her Pune home.

“Much has happened over these decades. My husband suffered paralysis in the last years of his life, and I also lost my son.”

Not one to let sadness take over, she quickly moves on to talk about her grandchildren, her daughter Sonali, her life in Pune and her new social media friendships.

Isn’t she scared about her solo trip to Pakistan at this age?

“Somewhere in my heart Rawalpindi has always stayed alive and I have no fear. After all, I will be returning home.

When Reena Varma posted about her plight to facebook, Pakistani journalist Beenish Siddiqua was moved to reach out to her “not to do a story” but just to touch base.

She also tweeted screenshots of Reena’s post expressing her disappointment about the visa rejection and tagged Pakistani politicians and other influential people.

Meanwhile, as she and Reena chatted and built trust, she thought it would help for Reena to record a video of her plight. Toshi Aunty was hesitant, but finally agreed.

A neighbour filmed the video and sent it to Beenish who wrote a story for the Independent’s Urdu edition, with the video embedded (21 August 2021).

This is what came to the notice of Hina Rabbani Khar, newly appointed minister of state for foreign affairs in Pakistan in April 2022, days after the change in government.

The Pakistan High Commission called Reena and asked her to re-apply and issued her a 90-day multi-city visa. The two countries grant visas to each other’s citizens only for specific cities, not the country.

Reena Varma had originally applied to visit between the cooler months of March-April as she is used to a temperate climate. However, since the visa has now come though, she will brave the weather and travel mid-July.

She expects to be in Lahore for a couple of days before going ‘home’ to ‘Pindi, and perhaps also a brief trip to cool off in Murree.

Ambika Pandit is Senior Assistant Editor with Times of India’s national bureau based in Delhi. A field reporter at heart, she writes on gender, minorities, social sector, parliament, politics and data. Email: [email protected] This story first appeared in The Times of India, 15 May 2022, titled ‘I am finally going home’: Pune granny to revisit Pak after 75 yrs

Time for a new beginning? Let people meet - before it’s too late