“I experienced nothing but love in Pakistan” — Amardeep Singh, author of travelogue on Pakistan’s Sikh legacy, grateful to Pakistan embassy for the visa 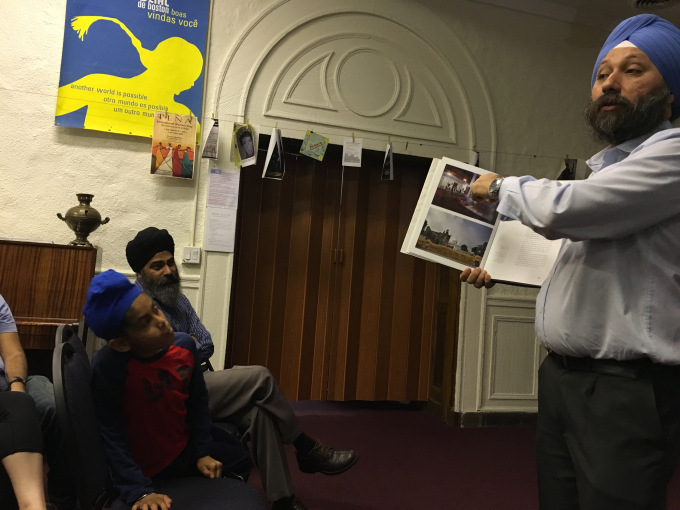 “I experienced nothing but love in Pakistan,” says Amardeep Singh, author of the photo-illustrated travelogue “Lost Heritage – The Sikh Legacy In Pakistan”, published in January 2016 (Himalayan Books).

He is also grateful to the Pakistan government for granting him a non-police reporting, 30-day, countrywide visa that enabled him to travel around the country with no restrictions.

Boston was the last leg of his hectic 10-day US-tour. He is now headed to the UK, where he has five speaking engagements — in London, Leicester and Birmingham — between June 22-26th, 2016.

Singh makes it a point of only speaking at events entirely organised by local community members who take care of his travel and stay. His US visit was made possible by a grant from Boston-based tech entrepreneur Dr Amar Sawhney, who also hosted Singh at his own home. Dr Sawhney’s mother, who was also present, is a Partition-survivor, born in what became Pakistan after 1947.

The Boston event was organised by friends from the local South Asian community — Umang Kumar, Hardeep Mann and Jaspal Singh. My role in the event was that I had connected Singh to them following our email correspondence. They managed to find the perfect venue — a book-lined room in the Encuentro 5 (e5), a collaborative project and space for progressive movement-building downtown, run by Massachusetts Global Action (MGA) and TecsChange: Technology for Social Change.

He urged audience members to make the trip and experience the country and people for themselves, beyond religious pilgrimages and organised tours. He himself is eager to return to Pakistan – this time, with his book.

Born in Gorakhpur, India in 1966, Singh is a Singapore-based former banker who has also lived and worked in Hong Kong. His own trip to Pakistan proved transformative, catalysing him to leave his 25-year career in the corporate world – most recently as head of revenue management at American Express credit cards in the Asia Pacific region — to pursue his passion for photography, travel and heritage.

Since the book’s publication, he has given over 40 presentations on his “labour of love” in various cities around India, besides Toronto, Sydney, Melbourne, Perth, Delhi, Kuala Lumpur, Singapore and Bradford.

“I did not go to write a book” – Singh in Boston. Photo: Beena Sarwar

After his upcoming UK tour, Singh will return to Singapore, then head to India for a well-deserved holiday with his family.

His motivation in traveling to Pakistan was initially to explore his father’s watan (homeland) and re-connect with his family’s past but he ended up making much wider and deeper connections beyond that.

He said he felt his month-long journey across Punjab, Khyber Pakhtunkhwa and Pakistan-administered Kashmir was driven by “an invisible force” that led to the weighty, 504-page coffee-table volume.