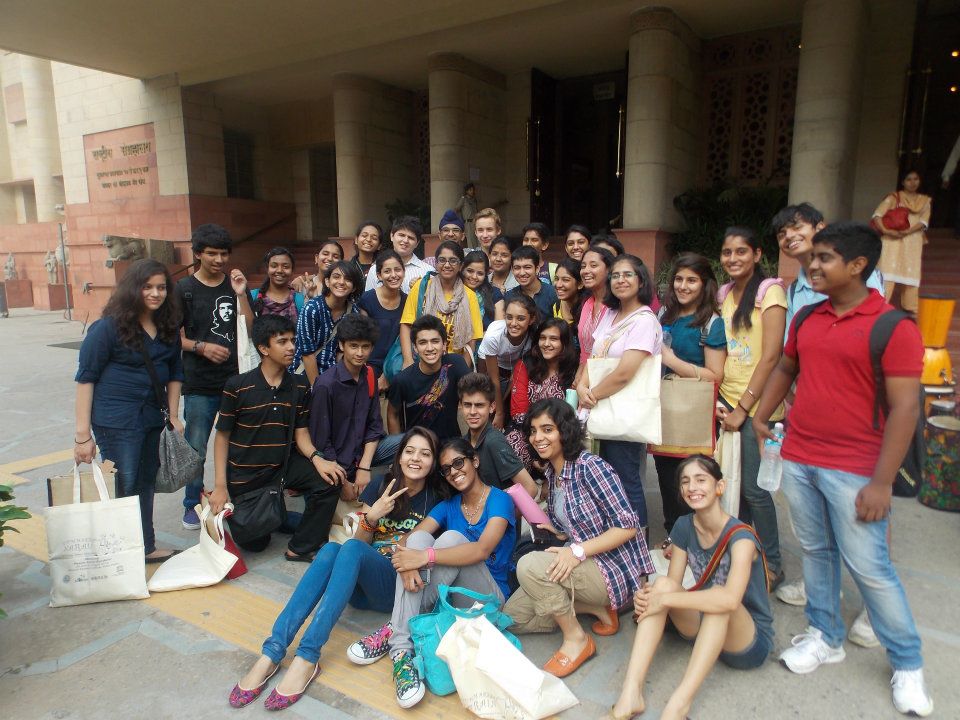 A psychology student in India reflects on the peace workshop she attended as an eleventh-grader in 2012 with students from Islamabad, that changed her views about Pakistanis forever. #MilneDo

It was a few days spent with the people from “the other side” in 2012 that changed my opinion of them — and for good.

As a student of class 11 in Delhi then, like my other classmates, my opinion about Pakistan and Pakistanis was very different.

Then Ghummakkad Narain, the travelling children’s literature festival, invited schools from Delhi to send two students each to attend a peace workshop at the National Museum Institute, New Delhi, from July 28- August 1. Looking back, I was fortunate to be one of the two students selected from my school.

It was one of the best workshops I attended and it changed my perspective. It probably changed theirs too, since they still say they miss India and would love to visit again.

During that workshop, I observed and realised how similar we are. Our Hindi language and their Urdu is probably one of the biggest differences between us, yet we both understood most of what we spoke.

We participated in a lot of activities together and went on field trips. We went to Feroz Shah Kotla Fort, Lodhi Garden, Lal Bahadur Shastri Memorial among others. At the museum, together we learnt about the Indus Valley Civilization and the items that were discovered during the excavation and are preserved there, such as the pots, seals, toys, skeleton of a woman, the famous dancing girl and so on.

We also watched a documentary on the Indus Valley Civilization, one of the oldest and greatest civilizations of the world, a connection that both countries share.

We did calligraphy together, where we helped them with Hindi and they helped us with Urdu. Together, we painted a long piece of cloth, which the Pakistani students had brought with them, pots and canvases with the Swastika and sign of peace.

Later, we also played Holi as the festival fascinated them and they said they always wanted to be a part of it. We played musical instruments such as congo and composed a melody. We interacted a lot and discussed food, cricket, Bollywood, history, politics, traditions, language, music and our personal lives. They visited the local temples, malls, Dilli Haat, Lotus temple, Qutub complex, Red Fort and the Golden Temple.

We became great friends and some of us are still in touch through Facebook and WhatsApp. Some of them said they would try and attend the workshop the next year too and I promised to do the same, but unfortunately it didn’t happen.

I was upset, but I’m glad and consider myself lucky that I attended at least one. I, along with my friends in Delhi, try and visit the museum at least twice a year to relive those moments and to share our experiences with others.

It was a thought-provoking and wonderful experience and I would love to meet my friends from Pakistan again.

Later, they made a video using the pictures they had taken in India. In the video, you can see the cloth painting and the calligraphy sessions. We met some wonderful people from Pakistan, such as Fauzia Minallah, an author, artist and human rights activist from Islamabad.

On the last day, we were divided into groups that included both Indian and Pakistani students. We presented our canvas paintings and spoke about it and shared our experiences of the workshop.

Based on Saadat Hasan Manto’s Aakhri Salute, they performed a skit for us, read out the writings of Pablo Neruda and performed a folk dance. In return, we sang for them and gave them collages and paintings. Finally, we received our certificates of participation from Anil Shastri, son of India’s second Prime Minister, Lal Bahadur Shastri.

Later, we watched Batman – The Dark Knight Rises late at night. Probably the only time my parents allowed me to stay out that late.

It was lovely meeting my friends from across the border. Since then, I haven’t been able to look at Indians and Pakistanis as “different” because there isn’t much of a difference. They all were very warm and welcoming. We became friends soon.

It is people who don’t want us to be together or love each other who highlight the differences, people who want wars and don’t want there to be any peace between us. But unlike them and like many others, I too want peace.

The peace workshop experience put me firmly on the side of the many Indians who want peace, especially with Pakistan, a country we share a strong history with.

I love Aman ki Asha for many reasons. One of them is that this initiative promotes peace between India and Pakistan and reflects on how we, as people, are similar in terms of traditions, attire, food and culture.

I would love to start a campaign to take these ideas forward. I want to organise an event where people from both India and Pakistan walk to the Wagah border with messages, signs and placards of love, peace and humanity.

We need to encourage the younger generation because the youth is the future of both the countries. And also because it’s time we let go of the past that we had no say in, and the bitter memories of partition our older generations still hold on to.

Painting by Indian and Pakistani students

Meeting and talking is essential. That is how I made friends from across the border and got to know them, and learnt how much they love India.

My generation needs to know and tell the world that our lands are divided, but our hearts aren’t.

The writer is in her last year of college studying Psychology. She is an avid reader of fiction, non-fiction and Urdu poetry, and a ‘Friends’ fanatic who enjoys painting, travelling, listening to music; yoga, and studying history.