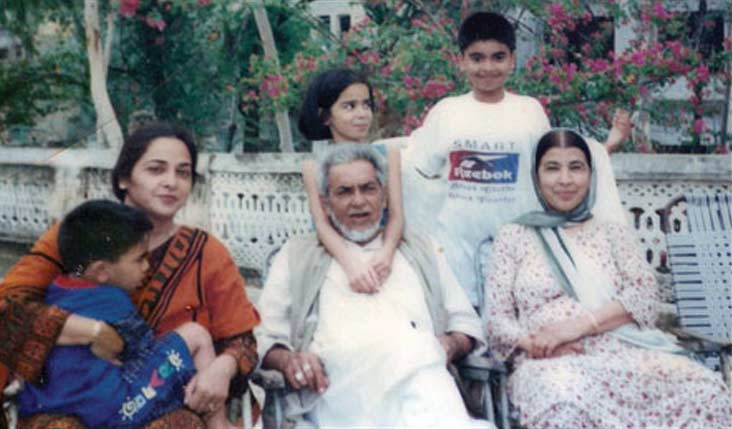 On June 15, the Supreme Court of Pakistan will hear a human rights petition filed by Dr Chishty’s daughter to urge the Pakistan government to take up his case on a diplomatic level

Inspired by the success of a plea from the Supreme Court of India to the government of Pakistan to free a long-incarcerated Indian prisoner in Pakistan, Shoa Jawaid, one of the daughters of the elderly retired Pakistani virologist Dr Khaleel Chishty imprisoned in India since 1992 has filed a similar case in Pakistan. The Human Rights Petition, filed on May 25, 2011 under Article 184(3) of the Constitution of the Islamic Republic of Pakistan, 1973 will come up for hearing on June 15, 2011.

Filed by former law minister and former senator Syed Iqbal Haider, the Petition appeals to the Supreme Court of Pakistan to direct the government to make all possible efforts and use its diplomatic influence to secure the urgent release and repatriation of Dr Khaleel Chishty.

Invoking “humanitarian grounds” it urges the Pakistan Government to ask the Federal and Provincial Authorities in India to free Dr Chishty, “so as to protect the life and liberty as well as constitutional rights of the Detenue who is a highly educated and law abiding citizen of Pakistan.”

The Petition asks the Supreme Court of Pakistan to request “the President, Prime Minister of India and Governor of the State of Rajasthan to remit the sentence, release and repatriate the Detenue to Pakistan in a similar manner as the Hon’ble Supreme Court of India had chosen to make a request to the President of Pakistan for the release of an Indian national Gopal Dass who was actually released in pursuance of the request made in the aforesaid Judgment of the Indian Supreme Court.”

Responding to an appeal by the Supreme Court of India, highlighted by Aman ki Asha, the Pakistan government had commuted the remaining sentence of Indian prisoner Gopal Dass, who had strayed across the border in 1984, arrested, and convicted of espionage.

Dr Chishty, now nearly 80 years old, was arrested in 1992 and implicated in a murder case. He has always maintained his innocence. Several prominent Indians campaigning for his release also believe he is innocent.

“A family dispute involving his distant paternal relatives took an unseemly turn and he was arrested under IPC Section 302, 307/37, 302/34 and 324/34. Our inquiry reveals that he was falsely implicated,” says an appeal to the President as well as to the Governor of Rajasthan in April 2011, signed by journalists Jatin Desai and Kuldip Nayar, film maker Mahesh Bhatt, retired Indian Navy Chief Admiral L Ramdas and human rights activist, Kavita Srivastav, general secretary of the People’s Union for Civil Liberties (PUCL).

The appeal urges the President of India and the Governor of Rajasthan to exercise their powers granted under the Constitution of India, and release Dr Chishty “in the name of humanity, mercy and reciprocity”. It notes that “the trial took almost 20 years when he was finally convicted and sentenced to life imprisonment in January of 2011”. It notes that Dr Chishty is elderly and in frail health, unable to walk, and bed-ridden in the prison hospital.

Under Article 72 of the Indian Constitution the President of India can grant pardon, as can the Governor under Article 161. This power of pardon can be exercised even when a case is pending, as held by the Indian Supreme Court in Nanavati vs. State of Bombay, A.I.R.1961 S.C. 112 (paragraph 21).

Regardless of the merits of the case, the pronouncement of his sentence showed “glacial speed even by the standards of the Indian judiciary,” as The Hindu put it (April 19 editorial). “Even less comprehensible is the Rajasthan High Court’s observation while turning down Dr Chishty’s plea for suspension of the sentence that ‘no leniency’ could be shown to him as he was a Pakistani national, even as it granted identical appeals by the three others convicted in the case.”

In Pakistan too, many besides Aman ki Asha, have taken up Dr Chishty’s case and urged the Indian government to show compassion. They include the prominent social worker Abdul Sattar Edhi, the Human Rights Commission of Pakistan, and the Ansar Burney Welfare Trust.

Dr Chishty’s family has met with the India Pakistan Joint Judicial Committee for the Prisoners when the Committee convened in Karachi in March 2011. The Committee, comprising retired judges of both India and Pakistan, has also recommended the release and repatriation of Dr Chishty to Pakistan at the earliest.

As reported by Aman ki Asha earlier, Mahesh Bhatt and Kuldip Nayar have also met with the Governor in an attempt to expedite Dr Chishty’s release. A PUCL delegation met with Rajasthan government representatives who outlined a process that may help with this objective. The initial stages of this process were completed over the last month, including Dr Chishty’s clemency appeal to the President of India, with several appendixes. The paperwork is now with the Rajasthan State Home Secretary and “we are hopeful that things will move fast now,” says Kavita Srivastava in a recent email.

The Human Rights Petition now before the Supreme Court of Pakistan was filed after the family got no response to their letter dated May 5, 2011 couriered to the President and Prime Minister of Pakistan urging them to request India to release Dr Chishty on humanitarian grounds.

The petition quotes the judgement of the Supreme Court of India who, while acknowledging that they had no territorial jurisdiction to issue direction to any authority in Pakistan, had said that this did not prevent them from requesting to the Pakistani authorities to consider the appeal of the Petitioner Gopal Dass, for releasing him on humanitarian grounds by remitting the remaining part of his sentence.

The Government of India would do well to reciprocate the Pakistan government’s large-hearted, prompt and humane response in releasing and repatriating Dass to India before he had completed serving his sentence.

URDU: part of India's diverse culture - 2 A letter to the Presidents and Chiefs of Army Staff of India and Pakistan