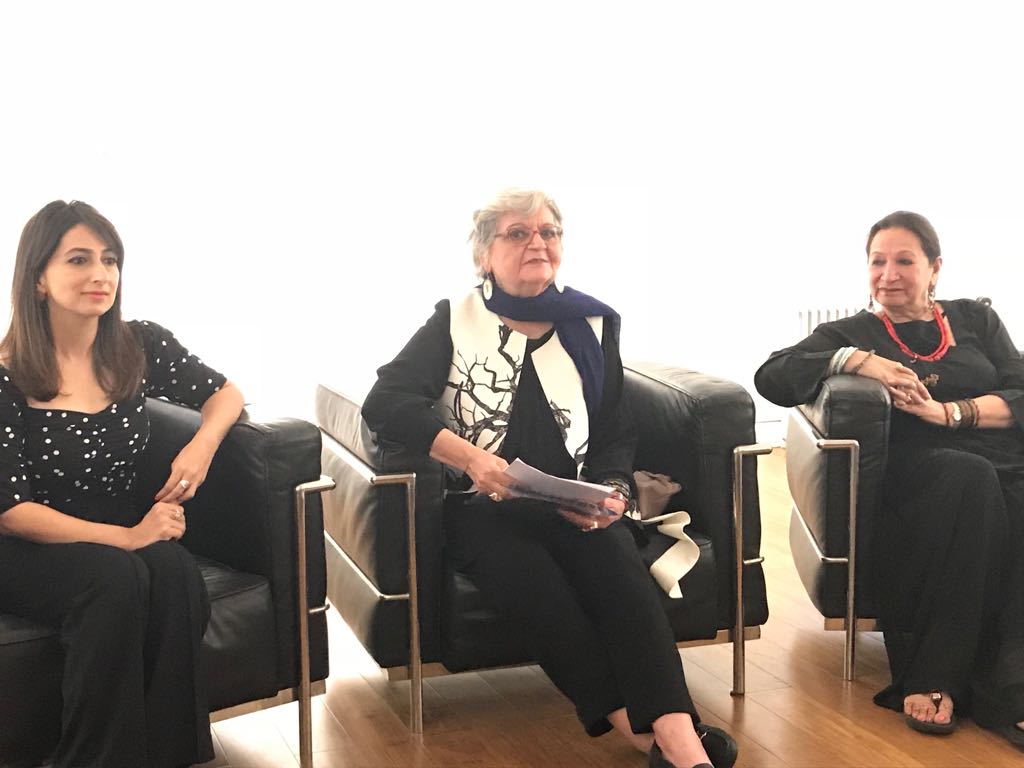 A thought-provoking Pakistan-India art exhibition that opened last week in New York City has its genesis in a conversation last year in Lahore, between an Indian origin professor in his avatar as an art gallery owner and a Pakistani artist.

Prajit Dutta looks more like the economics professor that he is (microeconomics, Columbia University) than art gallery owner. Growing up around art — his father Ajit Dutta headed India’s national academy of fine arts Lalit Kala Akademi in New Delhi — he realised he had an “eye for art”. His Aicon Gallery opened in 2002. Aimed originally at showcasing Indian masters, it soon broadened its platform and regularly exhibits Pakistani masters and upcoming contemporary artists.

In February 2017, his second visit to Lahore, Dutta was talking to the accomplished artist, writer and peace activist Salima Hashmi, former principal National College of Arts, who set up the Fine Arts department at BeaconHouse National University. In conversation, they were struck by how muted the 70-year celebrations were in both countries.

“It struck me that we could do something in New York, as it’s more and more difficult to do these things in India and Pakistan,” comments Dutta.

“Perhaps we had worked ourselves into a cul de sac. So we decided to let the artists have their say,” said the show’s curator Salima Hashmi.

In an unabashed display of self-confessed nepotism, she did what she often does when seeking guidance – turn to her father Faiz Ahmed Faiz whose poetry expresses the complexities of just about any situation. In this case, a line from his poem resonated with the show being planned. In A Prison Morning (Zindaan ki aik subh), the poet describes the break of dawn in jail, the inmates awakening to the sounds of keys opening locks and chains jangling…

Then, a distant drumbeat, and the sound of dejected footsteps
The sentinels, pale with the hunger of their own despair
The tortured, tormented sounds of prison inmates
Dancing arm in arm with those of their tormentors
(Translation by Shoaib Hashmi)

“The poet realizes that the prisoners and those who guard them are equally in despair,” says Hashmi. In the context of India and Pakistan, she asks, “How long have these sentinels been guarding us from ourselves, ensuring that we don’t meet?”

The quirkily titled Pale Sentinels: A Metaphor for Dialogue opened on 28 June at Aicon, its bold theme addressing Partition with critically acclaimed, award-winning Indian and Pakistani artists. “Each artist in this group has, in one way or another, engaged with borders and constraints,” says Hashmi.

The show is also a tribute to the celebrated textile artist Priya Ravish Mehra who has 26 pieces up. Tragically, she lost her 12-year battle with cancer a month before the opening. She had been immensely excited about her first appearance in New York.

Mehra’s lifetime association with traditional rafoogar families, textile darners on whom she did her thesis, brought together traditional crafts with fine arts. This comes through compellingly in her work. Hashmi and others at the opening paid tribute to Mehra’s sense of joy, her spirit, and her passion for mending.

Last year, Priya Ravish Mehra sent a shawl from Delhi that originated in Sindh before Partition to textile artist Shehnaz Ismail, Professor Emeritus at Indus Valley School of Art and Architecture, Karachi. Ismail sent Mehra a shocking pink silk dupatta that she has often worn. Each repaired the other’s shawl. Hanging by each other in the exhibition these textile pieces are “a testimony to the persistence in nurturing relationships and the power of loving endurance inherent in the people of the subcontinent”, as Hashmi put it.

The work of Ghulam Mohammad, known widely as GM, also has added poignancy. The day of the New York opening, he was supposed to be in London for another prestigious opening at the Victoria & Albert Museum where he was the first Pakistani to be awarded the coveted Jameel Prize in 2016. Tragedy struck the day before as his brother-in-law was gunned down in Balochistan.

GM’s collages created from tiny, intricately cut out words and letters from the Urdu script speak to the barriers and bridges created by language, issues he struggled with when a scholarship sent him to Beaconhouse National University in Lahore from his village in Balochistan. His work speaks also to the anguish of being unheard and misunderstood by the wider polity and the babble that obscures real issues.

At the opening reception, both floors of the gallery were crowded with guests, including many former students of Hashmi. Folding chairs set up for the panel discussion filled up quickly, leaving as many people to stand.

On Mehra’s shawl, besides doing rafoogari and embroidery, Shehnaz Ismail emblazoned a stanza by the rebellious Punjabi poet Amrita Pritam, from her poem Mein Tenu Phir Milangi. At the opening reception panel discussion, Ismail’s comment that at the time of Partition Amrita was “in love with one Muslim man after another” drew a laugh.

Ismail talked about the significance of woven fabric. Karachi no longer has a strong rafoogar community but the symbolism of using needle and thread, patching and darning continue to be metaphors for healing experiences. The repairs are meant “not to beautify but to heal.”

Cloth is an integral part of significant moments. “At birth the baby is swaddled in a sheet. A sheet becomes the shroud in death.” Acts of folding, wrapping, putting away things for safekeeping in “potli” are part of our culture and reflect the diversity of our communities, as each has its own way of doing these things.

Attempts to keep people apart are doomed to failure, rendered ineffective by new technologies that enable and facilitate collaborations and conversation, comments Dutta. A quiet presence, at the opening, he paid special homage to his mother Chandana sitting in the audience. When I greeted her later, she told me that she had fled from then East Pakistan with just the sari she was wearing.

The Punjab narrative tends to overshadow what happens at the India-Bangladesh border, something that Mumbai-based Shilpa Gupta addresses. Her Border Sky features five photographs of the cloudy skies above Wagah border as well as the Bangladesh border. Not knowing which photo was taken above which border highlights the pettiness of the divide on the ground.

Gupta’s other piece on exhibit also demonstrates her dark sense of humour. Titled 1:2138, a reference to the proportion of the length of the rope to the border, a ball made of roped up shredded cloth rests in a glass case. A brass plate states:

Saba Qizilbash, with 15 pieces in the show, flew in for the opening from her base in Dubai where she lives with her Kashmiri husband. As a Pakistani, obtaining visa to visit her in-laws in Srinagar takes “months of planning, permissions and boxes of mithai.” The experience feeds into her work that addresses the issue of borders and boundaries.

Her larger pieces are collages, panels of drawings that from a distance look like one. This is her attempt to “stitch the land, hem it together”. The collages’ oval shape evokes airplane windows – “I find myself looking at the land through plane windows – the plane takes me there, brings me down”.

The exquisitely detailed graphite drawings of imaginary landscapes featuring barriers, bridges, churches, temples, and mosques are based on photographs and maps of actual sites. With Google maps, she zooms closely into areas of interest and plays with images, like finding out the walking route from Karachi to Lucknow. The Line of Control sometimes yields “graphic images that give the sense something happened the night before” – a kurta, a chappal, or a dead cow. She also relies on direct observation, extensive historical research and travelogues. The process takes months and is “more intense than the drawings”.

The piece Sialkot to Jammu reminds Salima Hashmi of her aunt from their village Kala Qadir spotting Faiz on the train from Sialkot to Jammu. “Following him quietly, she saw him get down in Jammu. A beautiful Englishwoman come to meet him and they left in a tonga. My phuphi never told anyone. She would say that’s why she was his favourite sister,” says Salima Hashmi, hoping that one day perhaps it will be possible to make the trip again.

But the train station in Jammu where the lovers had their tryst is no longer there. Falling into disuse after Partition it has been replaced by a shopping plaza, as Hashmi found when she visited for a Faiz Festival some years ago.

The 63 pieces on exhibit include works by Nilima Sheikh, Faiza Butt and Waqas Khan. Khan, from south Punjab, “internalizes everything in an obsessive manner,” says Hashmi. Then, contrary to his gregarious nature, in his “sufi way” he spends 24-36 hours in deep solitude to create his art.

The show continues at Aicon till 28 July. There are no plans to take it to India or Pakistan, unless someone takes the initiative — and takes care of that visa, which is, as Dutta says understatedly, “not the most straightforward process”.

The writer is editor Aman Ki Asha. This piece was first published 15 July 2018 in The News on Sunday.

PIPFPD welcomes Imran Khan’s invitation to dialogue, urges India to respond positively What option do India and Pakistan have but friendship and peace?