In search of the Kathak king 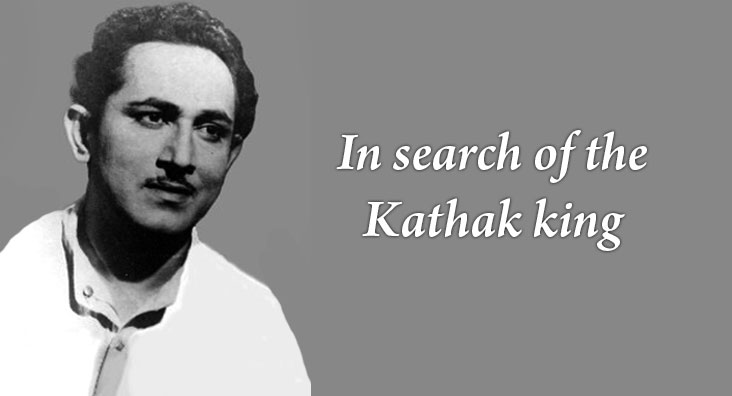 Ashiq Hussain, trained in the Jankiprasad Kathak Gharana of Banaras, abandoned a thriving career and fame in the Hindi film industry. A unique project that is trying to find his roots in Pakistan

A few months ago in San Francisco, my friend Malay asked me after our Iyengar Yoga class, “do you know who Ashiq Hussain was in Pakistan?”

He then went on to share the remarkable tale of Ashiq Hussain — a transcendent dancer and film star of India in the 1930s and 1940s — now forgotten.

At the time of Indo-Pak partition, Ashiq Hussain and his brothers, who were all musicians or dancers, uprooted their families from rural Rajasthan and migrated to Lahore. His last film Utho Jago was released in 1947 when he was just thirty-eight and still in his prime.

I was bewildered, why did Ashiq Hussain abandon a thriving career and fame in the Hindi film industry? I wondered if he found equal success in Pakistan?

Ashiq Hussain — who was recognised by the title ‘Nritya Samrat’ — was trained in the Jankiprasad Kathak Gharana of Banaras. On the eve of his departure, he handed the torch of this Gharana to an outstanding student — eighteen year old Hazarilal, who he’d raised like a son.

Hazarilal’s quest to popularise this Kathak style in independent India ran into several obstacles — career-ending injury, lack of patronage and institutional apathy. By the 1950s, the last elder Jankiprasad Kathak dancer had passed away and the dance style was on the verge of extinction.

In 1957 Hazarilal was teaching in obscurity in Bombay when a young middle-class woman — Sunayana Desai — became his student. In her, Hazarilal found the talent, perseverance and passion that could help resurrect his Gharana and fulfil his parting vow to his Guru.

Padma Shri Sunayanaji is based in Mumbai. She debuted in 1961 and still dances in the pure Jankiprasad style which is characterised by expressive abhinaya, a unique vocabulary of Natawari bols, and a devotional repertoire that seeks to uplift the soul. For decades she and Hazarilal (whom she married) toured Europe and America, connecting audiences to this ancient art.

Sunayanaji says, “It was the fond wish of late Pandit Hazarilal that a book be written on the unique style of Kathak he represented. This style was on the verge of being lost when I met him over sixty years ago. Through the grace of God, I was fortunate to find him and spend the rest of my life devoted to the practice, propagation and enrichment of this tradition.”

To this date, there has been no contact between Hazarilal/Sunayanaji and Hussain’s family after he migrated to Pakistan. It is known that his descendants, including grandson Pappu Samrat, are active in dance choreography in Lahore.

Sunayanaji is busy drafting her memoir which encompasses her journey and includes the story of Hazarilal’s tutelage under Ashiq Hussain. She heard many stories of Ashiq Hussain’s personality and talents over the years. The book will help bring him and his art back to the world’s notice.

To this date, there has been no contact between Hazarilal/Sunayanaji and Hussain’s family after he migrated to Pakistan. It is known that his descendants, including grandson Pappu Samrat, are active in dance choreography in Lahore.

My friend Malay is a researcher on Sunayanaji’s project. He says, “the idea of connecting with Ashiq Hussain’s family in Pakistan has tantalised us from the start. We just didn’t know how to go about it — after all it’s been seventy years since Hussain left. We would love to gather oral histories, memories and photographs from the Samrat family.”

He adds, “A further connection is that Ashiq Hussain’s Guru, Pandit Gopal, was based in Lahore until the early 1930s. He had popularised this style all over Punjab.”

When Sunayanaji visited the Indian Film Archives she found that not a snippet of Ashiq Hussain’s twenty-five films, including 1938’s Mother India, seems to have survived. She has just three photographs of Ashiq Hussain. Much remains to be discovered, and the project team is seeking collaborators who can help fill out this great dance story.

Sunayanaji says, “I never met Guru Ashiq Hussain, he migrated to Pakistan years ago. But, I heard so much praise of him from Pandit Hazarilal that I felt like I knew him.”

I have agreed to help research the connection to Pakistan in this project. To me, this endeavour is one of love, for dance, the arts and the intricate tapestry of the kindred relationship that still persists between the two countries.

Thanks to Sunayana Hazarilal & Malay Jalundhwala for contributing to this article. Please contact me at [email protected] — if you can help with this project in any way.