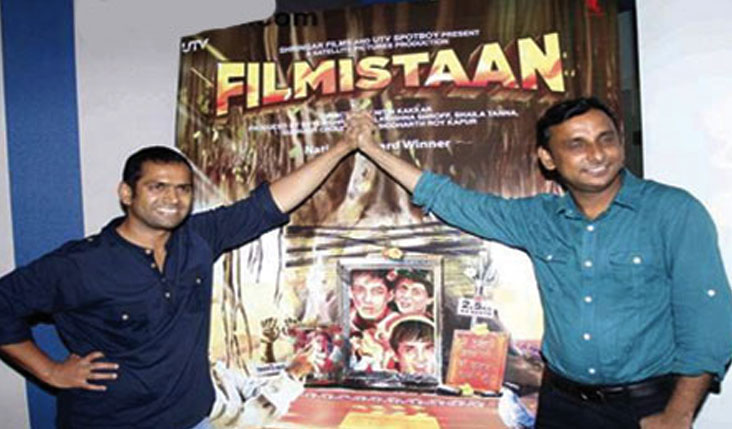 Indian actors Sharib Hashmi and Inaamulhaq at a Filmistaan promotion

If you are expecting the recently released Filmistaan to be a run-of-the-mill India-Pakistan movie, you’re in for a surprise. I went to watch a late Monday night show at a popular multiplex in Baroda. My first surprise was to find the theatre hall packed, quite unexpected on a working day.

IFriends had dished out positive reviews, terming it as ‘must watch’ for someone working on Indo-Pak relations. For a movie on India-Pakistan, I had expected something like LOC Kargil (2003), Gadar – Ek Prem Katha (2001), or Sarfarosh (1999), full of anti-Pakistan venom, enabling you to leave as a pride-filled Indian, armed with more information about everything that is wrong about your neighbour. That’s where the second surprise came in. Filmistaan totally defies norms of the “anti-other” nationalistic brand of cinema.

The third surprise came from the title. What does a film with the title Filmistaan, that suggests a typical Bollywood masala film, have to do with India-Pakistan? Actually a lot!

The story revolves around Sunny Arora (Sharib Hashmi), a young man who is crazy about Hindi films. A wanna-be-actor struggling to make a mark in Bollywood, he lands up working with a group of Americans making a documentary in Rajasthan near the Pakistan border. A terrorist group, mistaking Sunny for an American, kidnaps him and carts him across to Pakistan where they hold him hostage in a village.

Even in captivity, Sunny is positive and friendly. His passion for Hindi films is echoed by the villagers’ love for Indian cinema. The village children especially love this stranger who mimics, acts, plays and has fun with them, forgetting that he is an Indian and they are supposed to be his enemy.

Sunny develops a particularly heart-warming bond with Aftaab (Inaamulhaq) an aspiring film-maker who also trades in pirated Hindi films. They become the best of friends. Sunny helps Aftaab how to operate the camera, and Aftaab decides to help Sunny escape from the clutches of the terrorists to his home in India.

Two poignant scenes in the film delivered the message for me. In the first, when Sunny learns that he is in Pakistan, he observes that he wouldn’t have known this without being told, as the food, clothing, people and surroundings look so familiar to him.

In the second, after being shot by his captivators, Sunny is treated by the local hakim. As they talk, Sunny recounts his grandfather’s days in Lahore, and the hakim expresses nostalgia about his own days in Amritsar. Both realise they have a burning desire to be on the other side of the border, not an easy task.

Overall, the movie delivers a profound message – We are one, we are alike, we are brothers and sisters … Why fight? Why hate?

At the end, the ‘film’ in ‘Filmistaan’ is only a metaphor to highlight what we share in common, the connections and bonds that bring us together, despite all the forces that try to pull us apart.

It is also a telling commentary on the role of popular cultural media like television and cinema in forging strong bonds between enemy nations. Incidentally, Zee Network has just launched a new Hindi channel Zindagi that will broadcast Pakistani dramas in India. This is one way that popular media can contribute towards harnessing stronger bonds.

One reason why Filmistaan is attracting audiences is because of its refreshing take on the Indo-Pak conflict. Indians are so used to Bollywood doses of villainy and nationalism when it comes to Pakistan that a humanistic take on the ‘other’ comes as a pleasant surprise, even a shock.

As a humorous, subtle and sarcastic piece of art I see Sunnys and Aftaabs in every nook and corner of India and Pakistan, highlighting the human tragedy of the Indo-Pak story. With so much in common and so much to contribute to meaningful issues on both sides, too many are engaged in hatred, distrust and antagonism, at the expense of tolerance and accommodation.

This is actually not a film about films, it is about people like Sunny and Aftaab who want to defy borders and come together to channelise their energies – to produce a film, write a book, compose music, act in a play or work for social good. This is a film about how the state and now even non-state elements deny people on both sides the opportunity to discover the ‘other’, meet and be with them, work with them. The underlying humour in the film is based on the pain of not being able to do simple things together.

This is a film about friendships that are rarely nourished because an agenda of hatred and animosity dictates how we look at each other. Films are just part of the media with the potential to connect people on both sides.

I came out of the cinema hall laughing, but also feeling sad about not being able to watch this film with my friends from across the border. This is a film that doesn’t restrict viewers to the frame of national loyalities; it could be the story of any two nations or any conflict zone in the world.

Cinema is a cultural force. Such movies can go a long way towards building positive opinion on both sides. Our region needs deftly crafted and sensible cinema like Filmistaan, that is not hostage to nationalistic sentiments, that appeals to people irrespective of their nationalities.

I hope that one day we can watch such movies with friends across the border.

The writer is a doctoral candidate in Political Science at the Maharaja Sayajirao University of Baroda, Gujarat. She is the UGC scholar working on India-Pakistan Conflict Mediation and Role of the Media