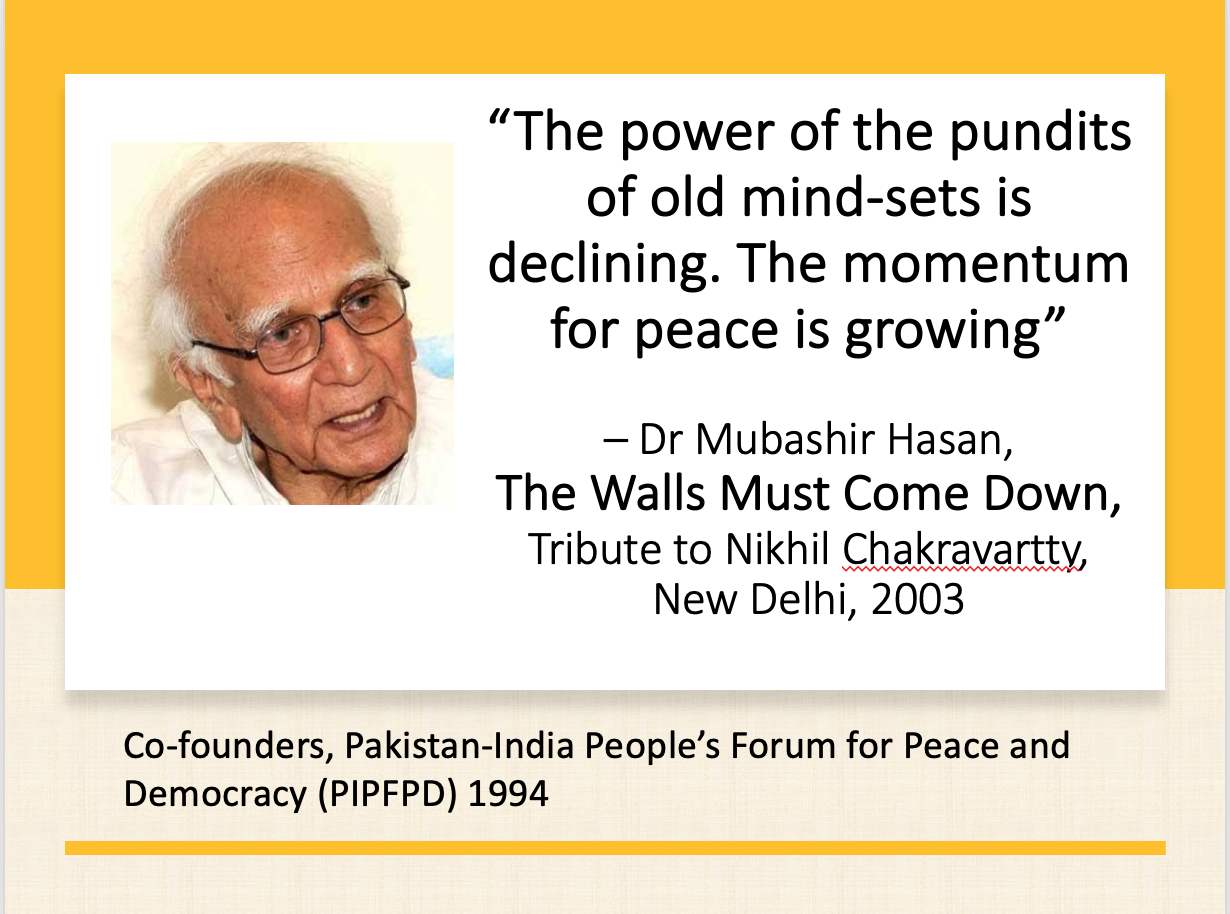 India and Pakistan peace activists across time zones came together for a virtual brainstorming session on March 28, inspired by the work of giants like Dr Mubashir Hasan, Asma Jahangir, Kuldip Nayar and Nikhil Chakravartty and others. On the agenda was the way forward for the movement, how to invigorate it by involving more allies, younger people and expatriates.

Titled ‘Pakistan India: Peace in South Asia beyond ideological barriers’, the meeting connected Pakistan-India “peacemongers” across generations, locations and occupations, looking forward with a view to placing India-Pakistan in the South Asia context.

The event coincidentally capitalised on a rare moment in recent years where there has been a deliberate lowering of hostility by both governments.

With the recent announcement of a ceasefire by both armies and the meeting of the Indus Water Commissioners last week, a thaw between the two nuclear-armed South Asian neighbours does not seem impossible.

“Things are moving ahead. It is a very important moment and we must take advantage of it,’’ said Jatin Desai, former General Secretary of Pakistan-India Peoples’ Forum for Peace and Democracy, the region’s largest and oldest people-to-people group.

“There is conflict reporting, but we haven’t placed enough emphasis on peace journalism,’’ said renowned journalist Raza Rumi, editor Naya Daur, speaking about the role of media in fuelling tensions between both countries.

Participants stressed the importance of urging both governments to normalise relations between the two countries and allow free movement of people across the borders.

“The Covid situation has had an impact on prisoners. The families of those imprisoned have not been able to meet each other. Can the two countries organise a way for families of prisoners to talk to each other electronically?’’ asked Desai.

The pandemic has underscored the need for better cooperation within the region. The situation had forced the governments on both sides to moot better connectivity projects. Participants flagged the importance of citizens coming together to demand a peaceful South Asia.

“There is a need to place the India Pakistan into a regional context’,’ said Beena Sarwar, senior journalist and editor of Aman ki Asha, or ‘hope for peace’, a platform launched in 2010 by two major media groups in either country.

The meeting also agreed that the Kashmir issue must be seen “as a matter of the lives and aspirations of the Kashmiri people” rather than simply a territorial dispute between India and Pakistan, as PIPFPD has been saying since its first Joint Convention 1994.

The treatment of ‘minority’ communities in both countries also remains a matter of concern, observed participants.

Participants decided to float a South Asia Peace Action Network (SAPAN) to bring “peacemonger” groups and individuals across the region under one umbrella to urge governments to reduce hostility, enable people to people contact by easing the visa regime, and cut down on military expenditure.

Activists hoped the current thaw in India Pakistan relations will lead to more exchanges between the countries. Over the past five years, cultural exchanges as well as people-to-people contact between the two countries has almost come to a halt with very few visas being granted.

“We need to broaden the peace constituency by bringing people together, learning from each other on issues that affect us and that have potential to change our future”, said Ravi Nitesh, co-founder of the youth group Aaghaz-e-Dosti.

Participants in several breakout rooms at the meeting discussing the way forward strongly felt the need to counter the vitriol on social media targeting those who speak for peace.