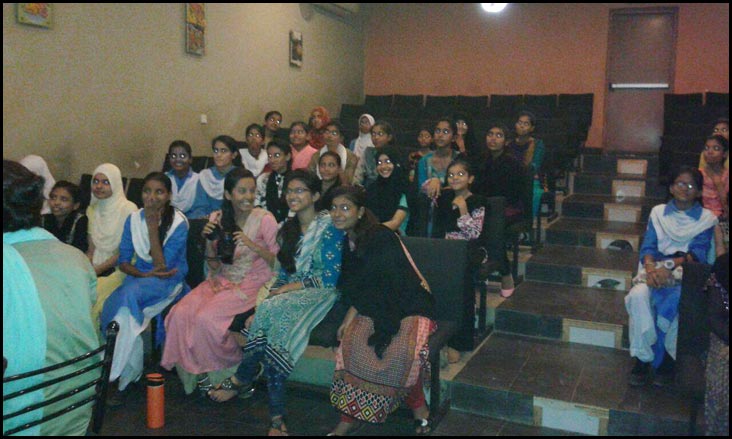 Students in Karachi participate in a video-conference with counterparts in New Delhi.

Leaving aside hostilities and self-created fallacies by the governments of India and Pakistan, a band of peaceniks on either side are attempting to keep the younger generation of both countries engaged in understanding each other through video-conferencing.

Convener of Aaghaz-e-Dosti, an Indo-Pak friendship initiative of India-based Mission Bhartiyam and Pakistan’s The Catalyst, Ravi Nitesh told Times of India on Friday that Indian youth activists, including Amrita Middey, Devika Mittal and Madhavi Bansal, addressed a gathering of 40 Karachi- based students in the 13-15 years age group through video-conferencing.

“The idea is to counter the stereotypes and misconceptions through a meaningful interaction with youths of either country,” said Ravi Nitesh.

During the interaction, Pakistan and Indian students were curious to know about each other’s culture, said the organisers.

Participants in New Delhi talk to students in Karachi.

“They asked about the different languages spoken in India, and I gave them a glimpse of the linguistic diversity in our country. I also told them that how, like Pakistan, India is also a culturally diverse and there are many languages and religions,” said Amrita Middey.

Ravi Nitesh said that the students asked the activists about the influence and popularity of Pakistani movies and TV serials in India. They also spoke about a TV channel in India, which showed

Pakistani serials, and wanted to know its popularity among Indian viewers.

There were also questions on food, famous places in India and Taj Mahal. The students also expressed their desire to visit India. Ravi said that such initiatives helped to keep hate-mongers at bay.