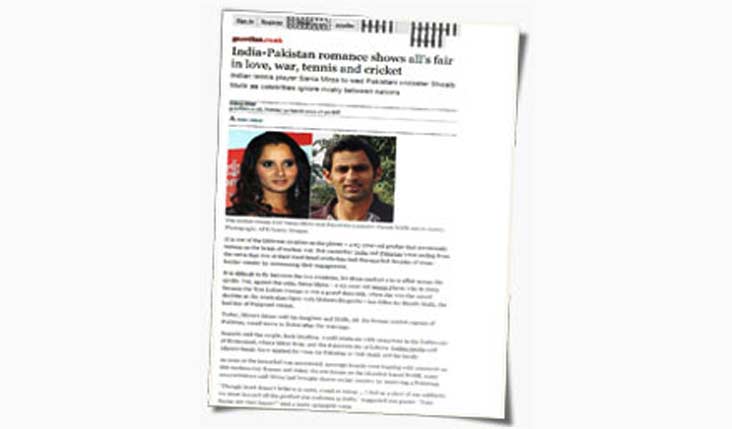 It is one of the bitterest rivalries on the planet – a 63-year-old grudge that occasionally teeters on the brink of nuclear war. But yesterday India and Pakistan were reeling from the news that two of their most feted celebrities had disregarded decades of cross-border enmity by announcing their engagement.

It is difficult to fly between the two countries, let alone conduct a love affair across the divide. Yet, against the odds, Sania Mirza – a 23-year-old tennis player who in 2009 became the first Indian woman to win a grand slam title, when she won the mixed doubles at the Australian Open with Mahesh Bhupathi – has fallen for Shoaib Malik, the bad boy of Pakistani cricket.

Today, Mirza’s father said his daughter and Malik, 28, the former cricket captain of Pakistan, would move to Dubai after the marriage.

Reports said the couple, both Muslims, would celebrate with receptions in the Indian city of Hyderabad, where Mirza lives, and the Pakistani city of Lahore. Indian media said Mirza’s family have applied for visas for Pakistan to visit Malik and his family.

As soon as the betrothal was announced, message boards were buzzing with comment on this modern day Romeo and Juliet. On one forum on the Mumbai-based Rediff, many commentators said Mirza had brought shame on her country by marrying a Pakistani.

“Though heart doesn’t believe in caste, creed or colour … I feel as a show of our solidarity we must boycott all the product she endorses in India,” suggested one poster. “Nato forces are very happy!” said a more optimistic voice.

The sporting marriage, unusual in the perennial rivalry between the nuclear-armed south Asian rivals, comes two months after Mirza broke off her engagement to a childhood friend.

Mirza was supposed to marry a man named Sohrab Mirza but cancelled the wedding in January, saying they “found ourselves incompatible”.

Today, she said she was delighted to be marrying Malik, and insisted she would carry on playing tennis once she became his wife. “My wedding inshallah [god willing] is going to be the biggest day of my life. I have been in the constant glare for too long and would appreciate privacy at this very personal moment in my life … I hope to be fully fit to represent India in the Commonwealth and Asian games that are scheduled for later this year,” said the 23-year-old starlet, whose short skirts have drawn the ire of Islamist groups in India.

On 8 September 2005, the Hindustan Times reported that a religious scholar named Haseeb-ul-hasan Siddiqui had issued a fatwa on Mirza because of her skimpy tennis outfits. “As long as I am winning, people shouldn’t care whether my skirt is 6ins long or 6ft long,” said Mirza following the fracas. “How I dress is a very personal thing. It is scary that every time I wear a T-shirt, it becomes a talking point for the next three days.”

Mirza was the first Indian to win a WTA singles tour event in 2005, and touched a world ranking of 27 two years ago, but is currently placed at 92 after numerous injuries.

Her groom, meanwhile, is an all-rounder who captained Pakistan between 2007 and 2009. Malik, 28, is among seven leading Pakistani players who are serving a one-year ban imposed by the Pakistan Cricket Board on various charges during a recent tour of Australia. Pakistan lost all three Tests, five ODIs and the only Twenty20 match on the tour which ended in February.

He is currently appealing the ban, and today confirmed on Twitter that the big news was true. “Thanks for all your support. And the news of me marrying to Sania is true,” he said. “Inshallah we will get married in April.”

Those other cross-cultural love affairs

Pakistani cricketer Imran Khan and Bollywood queen Zeenat Aman never got as far as the altar, but they still shocked their nations with their cross-border canoodling in the early 80s.

In 1995, Imran Khan once again proved that love knows no borders when he married the English socialite Jemima Goldsmith. In 2004, the couple divorced, ostensibly because although Goldsmith had agreed to spend four months a year in Pakistan to make the marriage work, she couldn’t adjust to life there.

In 1978, Washington born architect Lisa Najeeb Halaby became Queen Noor of Jordan, when she married King Hussein. She renounced her US citizenship after the nuptials, and also converted to Islam, taking on the name as Noor Al-Hussein , which means Light of Hussein.

Dutch prince Willem-Alexander, heir to the protestant House of Orange, ruffled some feathers when he got engaged to Argentinian Catholic Maxima Zorreguita in 2001. Not only was his bride-to-be the wrong religion, but she was also the daughter of an Argentinian minister who served under General Jorge Videla during Argentina’s “dirty war” from 1976 to 83.

Sonia and Rajiv Gandhi became one of the most successful cross-border couples after they met in Cambridge in the 1960s. He was from the Gandhi political dynasty in India; she had been born in Lusiana, Italy. After marrying, the pair moved to India and excelled in politics. First, Rajiv was prime minister. Now Sonia is president of the Indian Congress party.

Romeo was a Montague, Juliet was a Capulet. Never mind that the pair of star-crossed lovers came from the same small town in Italy – Verona – this was never going to work. And lo, it didn’t. In the end, they were together only in death.

Chain of hope Mukand and Riaz