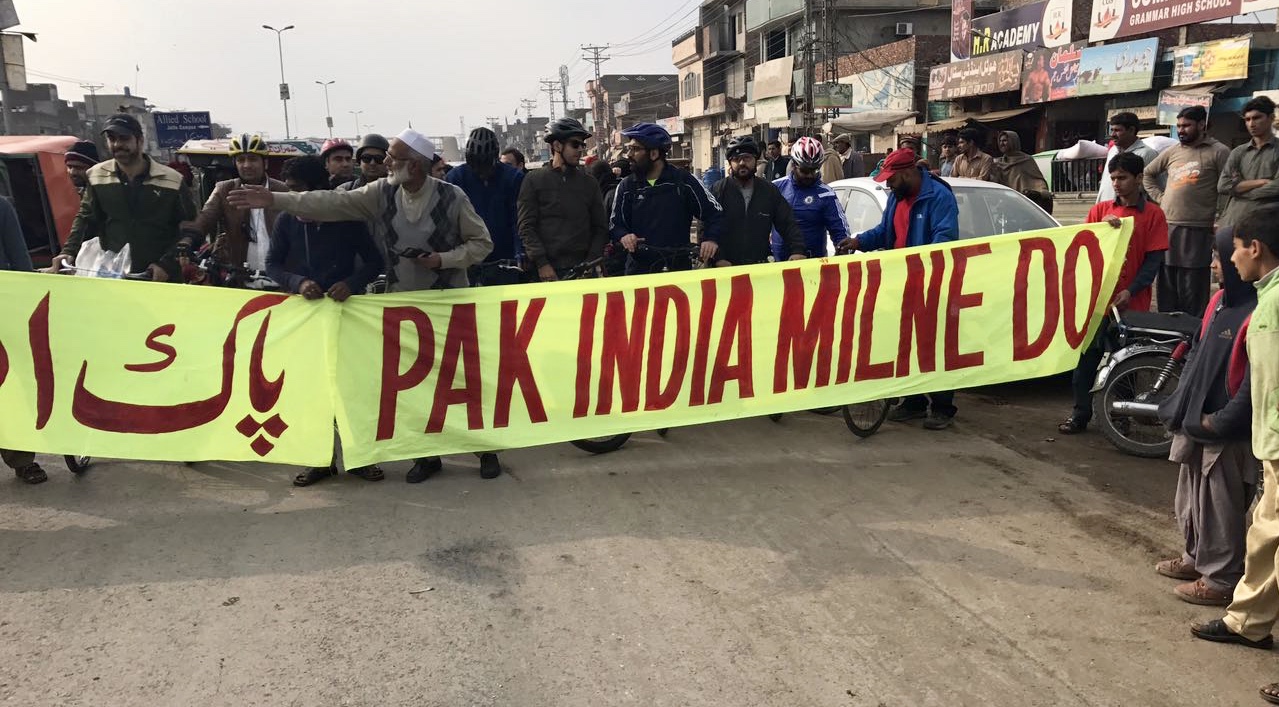 At Wagah border on Sunday, the cyclists who had set off from Delhi and Lahore respectively calling for a thaw in India-Pakistan relations, tried to wave and connect with each other across the iron gates. Border guards tried to stop them

By Samir Gupta and Beena Sarwar

Over a hundred cyclists in India under the banner of the youth group Milne Do (Let Us Meet) reached Wagah border on January 8, 2017, taking forward their mission of trying to warm India Pakistan relations. On the Pakistan side, dozens of cyclists under the banner of Critical Mass Lahore, plus dozens more workers of the Mazdoor Kissan Party, came to the border to support this mission.

Despite the short notice – less than a week – the Critical Mass Lahore group soon had a huge response on their Facebook page, with many in different locations around Pakistan supporting their Ride # 159 Milne Do Edition.

Once they reached the border, the two groups communicated by waving to each other and sharing songs and slogans across the iron gates, taking long-distances pictures of each other.

It has been a year since the chill in the India Pakistan relationship set in, in early 2016. This new year began with the new Indian army chief sounding a fresh warning to Pakistan about more “surgical strikes”. Pakistan’s army chief and Prime Minister responded in kind, with further belligerent rhetoric.

At the people-to-people level, however, the mood is very different. Through the cold and rain of northern India, rode determined peace activists on their fourth such ride since 2013. Flagged off from India Gate in New Delhi by veteran journalist Kuldeep Nayar and other eminent personalities on January 1, 2017, they cycled on highways and dirt roads through villages and towns. Leading the group is social activist Praveen Singh who has recently completed his Masters in Buddhist Studies from Delhi University.

Milne Do cyclists on the Indian side: Young and old wade through the cold to wake up and shake up India and Pakistan.

Hearing about their efforts, the cycling group Critical Mass Lahore decided to join them and dedicate its next ride to the cause.

To their credit, the administrations of either side did not try to stop the cyclists from reaching the border. On the afternoon of January 8, the two groups convened on either side of the iron gates at the Wagah crossing and tried to catch to a glimpse of each other.

“It was electrifying to see a huge banner in Urdu saying Milne Do in the other side of the border,” says Dr. Taimur Rahman, Economics professor and lead guitarist of the music band Laal, one of the rally leaders from the Pakistan side. “When we saw them and they say us we went crazy with excitement. They were dancing. We were dancing”.

However, the peacemongers on both sides soon found their activities curtailed. On the Pakistan side, the Rangers confiscated the group’s banners and told them they would have to leave if they didn’t stop ‘signalling’ (peace signs and hand waves) to the Indians. No “political” activity or sloganeering is allowed near the gate, although the term “political” is open to interpretation.

On the other side, says Dr Rahman, “We noticed that they also had to lower their banners and had some security forces placed right next to them on the stands… I guess both sides are scared of the people wanting peace”.

“They took our banners but couldn’t dampen our enthusiasm,” comments lawyer Rafay Alam, one of leaders of Critical Mass Lahore.

Rangers took away the cyclists’ banners so they wrote peace slogans on their hands. Photo: Ammar Aziz

Alam sends a special salute to Praveen Singh for the “amazing feat” and “such a profound message. Thank you for being an inspiration”.

If there was ever any doubt about whose war it was, that should have become amply clear. The military and the political establishments in India and Pakistan have locked us in this self-perpetuating conflict resulting in hundreds of thousands of deaths and untold misery upon the people of India and Pakistan.

To sustain this self-defeating war, the establishments on both sides do all they can to prevent the ordinary people of the two countries from meeting each other. The walls of bureaucracy they have erected make it near impossible for all but the privileged few to make a trip across the border.

What is amply clear is that the people want to reach out to each other. One group member who joined the ride posted on his Facebook timeline that he had cycled to Wagah border many times, but “this time it was something special” because it was the Milne Do Edition “to initiate peace talks between two countries”.

Indian activists seen from the Pakistan side. Instead of hugs and chai with each other, all they managed were distant pictures. Photo: Ali Usman Baig

Cyclists from both countries came to Wagah, he added, concluding poignantly, that although the two groups on either side could not meet physically, they showed their support by being there and “waving hands to each other”.

Samir Gupta is an IT professional and peace activist based in Ghaziabad, India. Beena Sarwar is a journalist and Editor, Aman ki Asha. Email: [email protected]