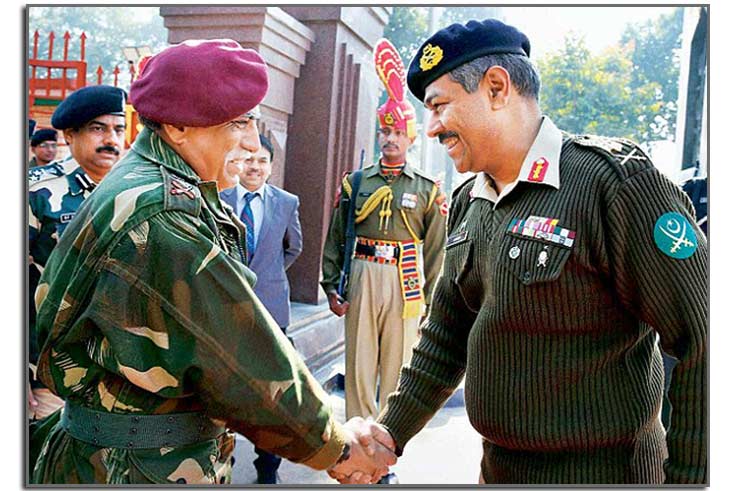 A Joint Statement by the Pakistan India People’s Forum for Peace and Democracy – the region’s largest and oldest people-to-people organisation – strongly condemns the ceasefire violations and firings at the Line of Control (LoC) and the International Border (IB) or Working Boundary (WB) along the border areas between the two countries and makes recommendations to achieve long term or permanent solutions to this issue and restore normalcy to the lives of thousands in the border areas.

The recommendations include the immediate restoration of flag meetings and contacts between the Director General of Military Operations (DGMO) of India and Pakistan, immediate meeting of the national security associations of both the countries as decided in Ufa and resumption of a structured dialogue between India and Pakistan.

Both governments must involve the participation of the border communities in any talks they hold on the issue, says PIPFPD. The recommendations demand an impartial investigation into the facts behind the firing, and urge politicians and media to stop sensationalising insensitive political statements.

This cross-border firing issue was highlighted in the meeting of the Heads of States in Ufa, Russia on July 10, 2015 but “there continues to a be a consistent lack of political will from both sides in genuinely addressing the issue,” notes PIPFPD.

Over the last two years, there have been nearly 800 recorded incidents of ceasefire violations in the border areas between India and Pakistan. This month, July 2015, there have already been 11 incidences. Last week’s firing left 16 injured and one dead on the Indian side in the Rajouri and Poonch sectors and five injured and four dead in Pakistan’s Sialkot Chaprar and Rawalakot’s Neza Pir sectors. The casualties include both civilians and army personnel, according to media reports on either side.

“The ceasefire violations have adversely impacted the lives of people living in border areas,” says PIPFPD. “Their access to education, health services, transportation, emergency and other basic services is consistently unavailable or disrupted. The agriculture-based economy has suffered severely, impacting people’s livelihoods. Security fencing laid by the security agencies in the middle of cultivable land has impacted crops and led to large parts of land lying unused. Local and migrant workers are unable to work in the fields due to fear of firing and shelling, leading to large-scale migration and displacement.

“The schools are regularly suspended and turned into relief camps until peace is restored. These camps are in dismal condition; food, water and hygiene facilities are inadequate, forcing people to return to their homes before they are declared safe. While some areas see major delay in relief, compensation and rehabilitation policy for the affected people, no such measures even exist in other villages.

“The vulnerability of these border areas is used to gain create political mileage. The armed forces and the media of both countries indulge in irresponsible blame-games and trading of allegations, which ultimately only harm citizens and lead to escalation of conflict. The people living in border areas are in a position of disadvantage not because they live in border areas, but because border areas have become a site for acting out political conflict and jingoistic nationalism. Border areas have been made consciously uninhabitable in a bid of one-upmanship between India and Pakistan, causing irrevocable harm to citizens on both sides of the border.”

PIPFPD strongly recommends the following for attaining long term or permanent solutions to this issue:

“We believe that the restoration of dialogue and peace talks at the highest level can bring back normalcy to the lives of thousands of suffering people living in border areas. A long-term solution depends on a stronger political will within civil and political circles of both the countries,” says the statement.

An Indian in Lahore Breaking the Indo-Pak jinx: Why are we not moving on?