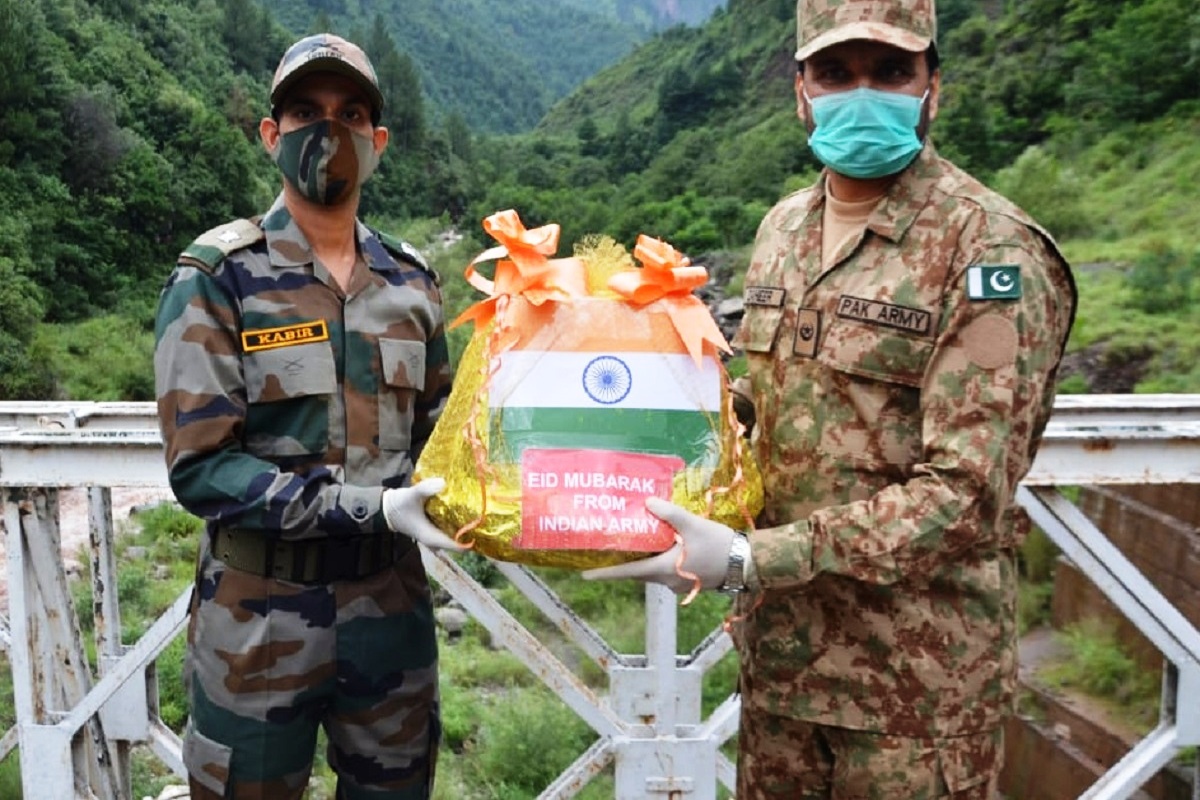 Indian Army officer offering sweets to a Pakistan Army counterpart at Aman-Setu in the Uri Sector of Kashmir. Photo: The Statesman

Indian and Pakistani soldiers exchanged sweets with each other at the occasion of the festival of Eid-ul-Azha at the Line of Control and the International Border in Jammu and Kashmir on Wednesday.

“This is the first exchange of sweets between the two border forces after the Pulwama terror attack in 2019 when 40 CRPF personnel were martyred after which India suspended the exchange of sweets with Pakistani troops on festivals,” reports S.P. Sharma in Jammu, writing for The Statesman, India (Indian Army, BSF exchange sweets with Pakistani counterparts on Eid, July 21, 2021).

Soldiers of the Indian Army exchanged sweets with their Pakistani counterparts at five places on the LOC, while the Indian Border Security Force (BSF) offered sweets to the Pakistan Rangers at six places on the International Border, according to the report.

Colonel Emron Musavi, India’s Srinagar-based defence spokesman, said that the India and Pakistan Armies held a Flag meeting and exchanged sweets at Kaman Aman Setu, Uri and Tithwal Crossing on Kishanganga River in Tangdhar, Kupwara, “as a gesture for promoting peace, harmony and compassion in the spirit of the Eid festival”.

Both the Armies have been strictly following the ceasefire agreement on the LOC.

The Jammu based defence spokesman, Lt. Colonel Devender Anand said that the two Armies exchanged sweets at the LOC on the Poonch-Rawalakot Crossing Point and Mendhar-Hotspring Crossing Point in the Poonch district.

The ceremony is seen as an enhanced confidence-building measure in the backdrop of the ongoing ceasefire between both countries. Indian Army representatives conveyed greetings and wishes for peace and harmony to their Pakistan Army counterparts. Lt. Col. Anand said that the gesture was appreciated by both the Armies and is expected to further promote goodwill and mutual trust, reports The Statesman.

Another official, DIG BSF SPS Sandhu said that the BSF and Pakistan Rangers troops greeted each other and exchanged sweets on the international border in Hiranagar, Samba, Ramgarh, RS Pura, Arnia and Pargwal Sectors of Jammu.

There has been no cross border shelling since the ceasefire was renewed in February, because of which farmers and residents on both sides of the border are living peacefully, says the report.