INDO-PAK EXPRESS, YOU MAKE US PROUD 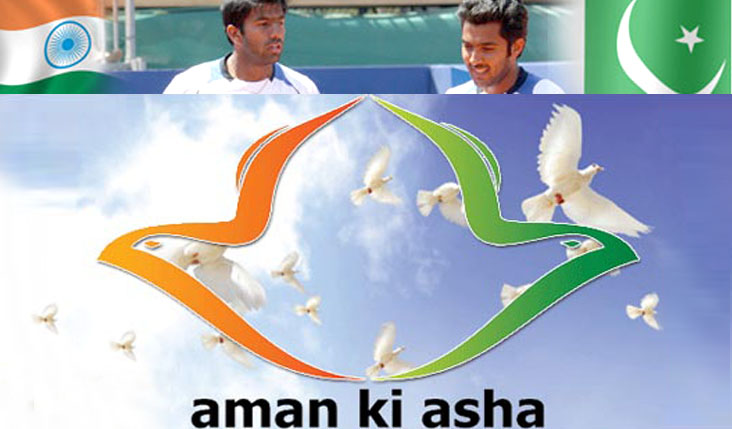 The victory of Indo-Pak Express, Aisam ul Haq Qureshi and Rohan Bhopanna, at the Gerry Weber Open Tournament in Halle, Germany, brings a cool breeze amidst the summer heat, to all of us from India and Pakistan. After winning the match they reach to their seats adjacent to each other where their white jackets hang, embellished with the four magical words:

The message is simple and brief, yet has far-reaching implications. The message holds the key to the prosperity of one fifth of the Earth’s population.

They are best friends, both on and off the court, and say that they complement each other’s style of play. Ever since they paired up in 2007, their careers have been marching uphill..

Currently ranking sixth in the 2011 ATP Doubles Team Ranking, and moving with this victory, a step closer to the Barclays World Tour Finals, they have continued make their families, friends and countries proud.

It is not just their game but their spirit to rise above religious and political differences that makes us all proud. They may have yet to fulfill their dream of Wimbledon Doubles title, but they have already lifted the biggest Trophy of Peace and Sanity.

After one of the tournaments, Aisam had remarked: “There was a lot of Pakistanis and Indians in the crowd cheering for us. And you couldn’t tell the difference, who was Pakistani and who was Indian, they were all mixed together and supporting the same team.”

And indeed this is the truth, no matter what sceptics may say. We have more in common than in differences, whether is it be our appearances, our histories or our geographical location.

These talented young men are a living example to the 1.4 billion Indians and Pakistanis that “United, we shall stand”.

The duo echoes the feelings of millions of hearts that throb in the chests of the people, who aspire for peace and prosperity for themselves, as well as for their neighbours. Like Aisam and Rohan, these millions too could become the real ambassadors of peace in their own right. Together they could reckon to be a Peace Force large enough to defeat any force of hateful extremists or other vested interests that leave no stone unturned to sow hatred and differences between the two neighbours.

History, with three wars and years of tensions, cannot be changed and borders cannot be erased. But these young men have shown us that by ‘being friends’, we can avoid the waste of energies in hatred and blame games, and instead, harness the same energy towards progress and prosperity for the entire region. Let the borders be just on the land, not in our hearts is what the pair teaches.

It does not need rocket science, but a just a flicker of change in onecs thinking to turn this hatred into love. It does not even need too many bureaucratic visits, MOUs or anti-war treaties if one and a half billion people of this subcontinent decide to make Aman ki Asha (hope of peace) into a real everlasting peace.

Indians and Pakistanis are 1.4 billion people together, sitting beneath the noose of nuclear weapons in the region. True, that the possibility of these being used is negligible, but then why such a hefty expenditure in developing, maintaining and improving their ‘killing’ capabilities in the name of big meaningless words like ‘ nuclear deterrence’?

We do not deny that there aren’t serious differences and contentious issues, but three wars and numerous tensions have failed to solve them. Nor will the missiles and nuclear weapons resolve them in future. There is no issue which cannot be settled through peaceful negotiations. So for the sake of the well being of the huge numbers of people at stake, it is time we give lasting peace a real chance. Tensions and wars benefit few, but peace shall benefit each one of us across the subcontinent.

The political tensions provide an excuse to the vested interests (outside the region) to continue getting both sides to buying arms and building arsenal for ‘safety’, amidst poverty, hunger, ignorance, illiteracy for millions on both sides. What if this money was used for development and not arms build up?

Let us ask for our ‘safety’ not through arms and ammunition, but through regional cooperation in education, health, alleviation of poverty and economic activity. This is only possible if both sides are at peace with each other.

Is this asking for ‘lasting peace not tensions’ that farfetched a dream? Maybe the idea looks a dream, but then dreams do come true too.

And Aisam ul Haq and Rohan Bhopanna have shown us just that.

The writer is an Indian medical practitioner married to a Pakistani.