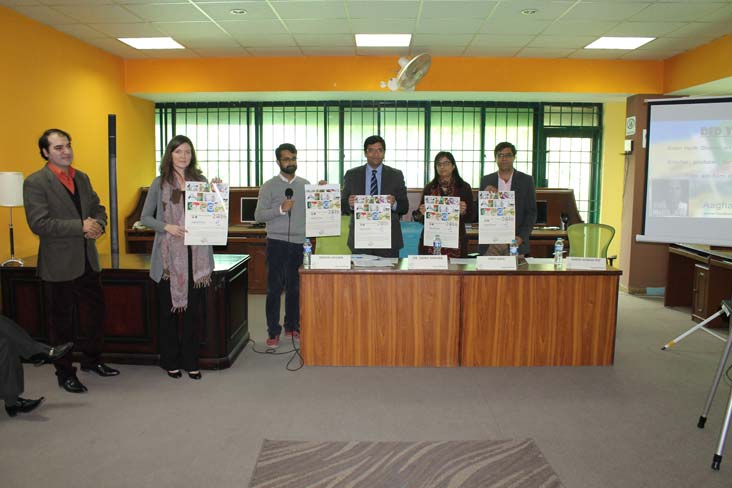 After successful events at several cities, Aaghaz-e-Dosti brings a message of peace and love to Chandigarh on Valentine’s Day, February 14, 2016

The Indo-Pak youth group Aaghaz-e-Dosti (start of friendship) will launch their Indo-Pak Peace Calendar in Chandigarh, India, on Feb 14, 2016.

The calendar, published for the fourth year running, features artwork selected from entries sent by students in both countries as well as messages from prominent personalities who have actively worked for peace.

It has already been launched in several cities in India and Pakistan — Delhi, Panipat, Toba Tek Singh, Islamabad, Ayodhya, and Lahore (see ‘A new year, a new calendar – for peace‘). Other venues in Pakistan and India are on the cards.

Students whose work is featured in the calendar are also invited to participate and their contribution recognised at the event.

Aaghaz-e-Dosti District Chapter coordinator Umair Ahmad stressed the need for inter-faith harmony and friendly relations with neighbouring countries. Terrorism cannot be defeated by bullets – what’s needed is to change the mindset of those who are involved in terrorism.

Students Maham Gulzar and Wajid Ali whose paintings were selected for the calendar were felicitated at the programme.

In Lahore, the event held at the Human Rights Commission of Pakistan brought together several prominent peace activists and political party activists, journalists, poets and others. They included London-based artist and theatre director Marta Schmidt, famous for her play based on Sadat Hasan Manto’s story Toba Tek Singh and Nisar Ahmed Chaudhary, President of South Asian Fraternity, Pakistan and the Chief Coordinator of Foundation for SAARC Writers and Literature, Pakistan.

Dr. Zahid Shahab talked about the need for teachers to inculcate a spirit of learning and questioning in their students’ minds, particularly given how both states, India and Pakistan, further negative perceptions about each other. It is not only education, but also the quality of education, the skills of critical thinking that is vital in promulgating peace. ‘Peace demands creativity’, he said.

Dr. Saeed Rid referred to his PhD thesis on people-to-people contact between India and Pakistan based on his case study of Pakistan India People’s Forum for Peace and Democracy (PIPFPD) and Aman ki Asha

He noted that despite the deadlock between both countries, people have sustained their contacts and continued talking to each other. After the Pathankot attack there was a pressure on the Modi government to abandon the peace process but pressure from peace groups weighted heavier. There is now greater understanding that terrorists cannot be allowed to derail peace process.

Sidra Saeed recalled her interaction with Indians at Tedx in Secunderabad – ‘being in India was being at home away from home’. After a tiring and difficult visa process, she had to take a circuitous travel route – flying Islamabad-Dubai-Mumbai and then to her final destination Hyderabad.

She said her first interaction with an Indian, on the plane, compensated for the fatigue and agony. They both asked each other “ignorant: questions about each other’s countries, and realised that their perceptions were based on media sources. She also found that the young people she met at the event really wanted to visit Pakistan.

Peace for the region is more necessary now than ever before, she stressed. Ultimate peace between India and Pakistan, and in the region, lies in talking about issues from Afghanistan, Iran, Kashmir, to China.

Moderator Daniyal Hassan shared his experiences of a visit to India in September 2013 to attending a Model United Nations convention at Delhi University. He pointed out that despite all the tensions, the ‘Dosti bus service’ remains a success story that continues to operate on subsidised fares.

In the discussion session, in response a question about Kashmir, Dr. Saeed Rid noted that the governments of Pakistan and India need to resolve the issue of Kashmir not according to their own will but according to the desires of the Kashmiris on both sides of the border.

In response to a question about how to counter the hegemonic ideology of hatred in the curriculum Dr. Zahid Shahab stressed the need to develop a peace rhetoric, for which everyone has to take individual responsibility.

Concluding the session, Erin Molnar Mains, Assistant Cultural Attaché from the US Embassy in Islamabad, noted that India and Pakistan share more than their differences. She stressed the importance of exchange programmes in peace building.

All the speakers stressed on the positive use of social media as a borderless tool that can also be divisive tool. Since it has no central control, people need to be trained to use it in a positive way.

Pakistani activists fight harsh IT rule that India scrapped Intizar Husain: 'Our culture is part of a great tradition as much Hindu as it is Muslim'