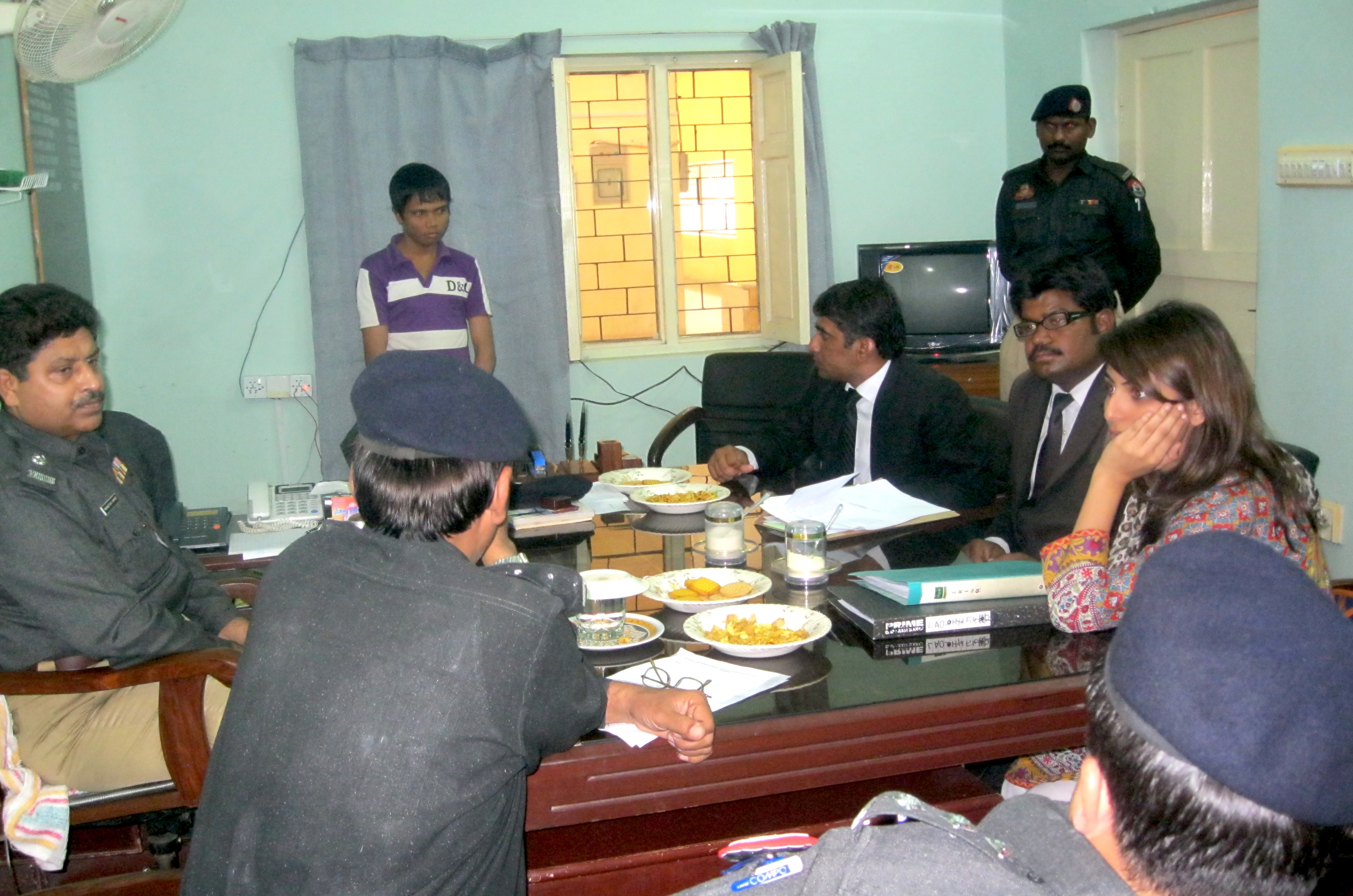 April 2, 1018: Superintendent of Police in Seoni, Madhya Pradesh on Sunday told Indian journalist and peace activist Jatin Desai that police have now verified Jitendra Arjunwara’s Indian nationality and will soon write to the Ministry of External Affairs. The MEA will then communicate with Indian High Commission, Islamabad who in turn will take up the matter with Pakistan’s Ministry of Foreign Affairs to repatriate Jitendra.

Desai had filed an application under the Right To Information Act and sent a memorandum to External Affairs Minister Sushma Swaraj and the Indian High Commission in Pakistan seeking information about this case. He had recently received a notice dated 21 March 2018 stating that Jitendra Arjunwar’s identity could not be verified.

Various individuals and journalists have been highlighting this case for some time, most recently in October 2017 with the #helpJitendra hashtag.

One face, far younger and paler than the others, immediately caught my attention from among the similarly weak and frail patients laid out across the rows upon rows of beds at the underequipped and understaffed medical ward of Malir District Prison, Karachi.

The young prisoner, suffering from a blood disease, is Jitendra Arjunwara from India. So weak that he is unable to walk unassisted, he was barely able to respond to my queries.

I was inspecting living conditions of prisoners about a month ago as part of a routine visit as part of the Committee for the Welfare of Prisoners, a body established by the Home Department of the Government of Sindh.

Over 4,500 inmates are crammed into the prison that was built in 1962 to accommodate 1,600 prisoners. The prison’s medical ward looks much like the general wards in most public hospitals except that here, there are no family members attending to their loved one’s needs.

The medical officer in charge said that Jitendra has been taken to the Civil Hospital multiple times for blood transfusions. Each time, his life has perilously hung by a thread, but he has miraculously managed to survive for over three years.

Jail officials have no option but to situate him as a stateless permanent fixture in the medical ward, forgotten and secluded, until the next time he has to be rushed to the Civil Hospital in the prison’s lone ambulance.

Jitendra’s story stands out for a number of reasons beyond his medical condition.  He was an adolescent, under 16, when he accidentally crossed over into Pakistan in 2013. He says he had an argument with his mother and ran away, deciding never to return.

Pakistan Rangers arrested him at Cheta Chowk, Khokrapar in August 2013. The Additional District and Sessions Court in Umerkot sentenced him to one-year rigorous imprisonment.

Already suffering from a debilitating blood disease, he was incarcerated in the juvenile prison in Hyderabad. As Jitendra’s health deteriorated jail officials transferred him to the Malir Prison in Karachi which has a bigger medical dispensary.

Although his sentence expired in July 2014, it was a further six months before he was first granted consular access for verification of his nationality.

In case of India-Pakistan cross-border prisoners, their consulates have to verify their nationalities before they can be released. Inexplicably, this process, which is substantially time consuming, often starts after they have served their entire prison sentence. “All that Pakistan wants is a document to ascertain his nationality,” campaigner Syed Abid Hussain, a Bhopal-based interior designer who started the ‘#Helpjitendra’ campaign on twitter told TOI.

India and Pakistan signed an agreement in 2008 according to which they will grant consular access to prisoners from the other country within 90 days of arrest. This should be implemented in letter and spirit.

Jitendra has received consular access twice since he completed his sentence in 2014. Awaiting confirmation of his citizenship from the Indian High Commission, Pakistan’s federal review boards keep extending the period of his internment on the grounds that if released in Pakistan, “there is an apprehension that he may go underground and indulge in criminal activities”.

In the interim, Jitendra’s forced statelessness has isolated him in every way possible. He is estranged from contact with his family and loved ones. He knows no one in Pakistan who would visit him in jail or bring him clothes or food of his liking. Jail authorities have barred anyone from meeting him, including members of the Society for the Protection of the Rights of the Child (SPARC) who tried to help him earlier. Recently, he has been denied access to lawyers from our Legal Aid Office Project.

He is even cut off from the 120 fellow Indian prisoners who are accommodated in separate barracks in the same prison. In some ways, even they appear to be as out of reach for him as the high commission officials responsible for his ultimate repatriation.

Jitendra’s particulars after arrest in Pakistan

Innocent casualties of India and Pakistan’s enmity like Jitendra continue to suffer through absolutely no fault of their own. Every violation and transgression of the Line of Control ceasefire further derails the administration around the repatriation of these blameless souls.

This administrative machinery seems only to be well oiled when prisoners are used as bargaining chips to de-escalate rising geo-political tensions between the two countries. This vicious cycle of catch and release has existed and brazenly continued since partition.

Security forces routinely detain each other’s fishermen who transgress the invisible maritime boundaries between the two nations, whether they are inadvertent drifters pushed by tidal currents or deliberately cross, caught in the heat of the chasing their catch. Not only are these fishermen caught and imprisoned but their boats, the only source of their livelihood, are confiscated.

Those who are arrested at sea are generally the poorest of the poor; working for boat owners on a catch-share basis. Often the only breadwinners of their families, their detention causes great hardship to their families and paralyses entire communities that bring together all their savings to purchase a single boat.

Hundreds of fishing boats belonging to such prisoners lie rotting in the docks of both countries. Each derelict boat is a harrowing reminder of the misfortune of the individuals, families and communities whose narratives are connected to it.

The joint India-Pakistan Judicial Committee on Prisoners, formed in 2007, was tasked as being a watchdog to conduct bilateral visits to inspect each other’s prisoners. However, it has not met since the Modi government came into power.

File photo of the ailing Jitendra Arjunwar shortly after his 2013 arrest. He remains incarcerated even after completion of his sentence in 2014, awaiting verification of his Indian nationality.

This Committee must be revived, and its recommendations implemented, including that fishermen caught at sea must be released after a warning rather than incarcerated on the other side.

The national security advisors of both countries at a meeting in Bangkok last year recommended taking steps to release cross-border prisoners who are elderly or disabled or females, on humanitarian grounds. They also committed to reviving the Judicial Committee.

Recently, both countries agreed to revive the Judicial Committee on Prisoners as well as release prisoners over 70 and women and children prisoners. These promises should be made reality immediately.

Until then, prisoners will continue to suffer. Lying in the general ward in Malir District Prison, Jitendra is practically on his death bed.

The tit for tat murder of Pakistani prisoner Sanaullah Haq “Ranjay” in India a week after the death of his Indian counterpart Sarabjit Singh in Lahore’s Kot Lakhpat Prison should serve as a reminder of the potential perils of the inattention towards Jitendra.