“It’s like looking into a mirror for the first time” 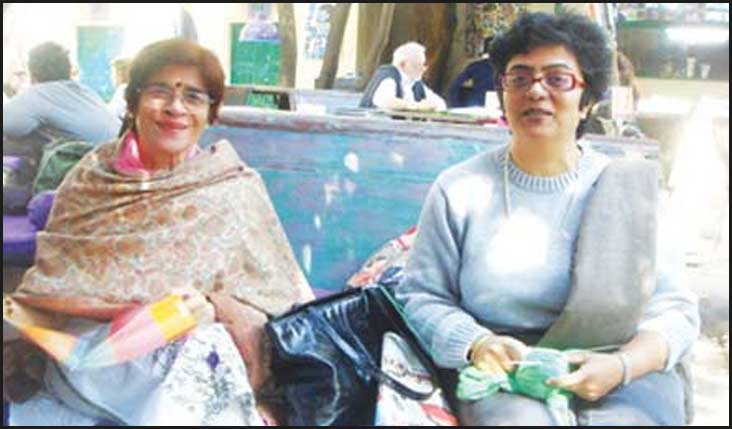 A candid chat with Indian writer Saaz Aggarwal about Sindh, the lost homeland of her mother, peace between India and Pakistan, and more

Indian writer and artist Saaz Aggarwal was recently in Karachi to attend a seminar on “Sindh Through The Centuries” organized by Sindh Madrasa tul Islam University (SMIU). A biographer, humour columnist and book critic, this was her second visit to Karachi during the last year and a half. Last year at the Karachi Literature Festival, Oxford University Press launched her book, Sindh: Stories from a Vanished Homeland. Her Bombay Cliches is a series of quirky paintings of contemporary urban India done in a traditional Indian folk style. Excerpts from our discussion:

Interestingly, you do not even speak or write Sindhi. What got you to write about this part of the world while living in Pune, India?

My mother Situ Savur migrated from Hyderabad Sindh with her family during the partition and settled in Mumbai. None of them ever speak about Sindh, including my mother. But when I was 36 years old, all of a sudden she started sharing her childhood memories with me. She told me she was born near Larkana, then moved to Hyderabad with her parents. She also had fond memories of Karachi. ‘When I close my eyes, I can still see all those places,’ she told me once recalling her childhood days in Sindh.”

Tell us about your book on Sindh?

There is nothing extraordinary about my book. It is just a collection of personal stories and memories of ordinary people, interwoven with facts and opinions from secondary sources. I believe that its success lies in the fact that these stories, most of them dated back 67 years and more, have never been told before.

What did your mother tell you about her lost homeland?

The most dramatic insight I had into what migration had done to my mother, who left Sindh at age of 13, came when I started interviewing her for my book. Our families come from five villages in Larkano district, she told me, and thinking hard, she slowly named them as I typed into my laptop. My father’s village was Khairodero. Then there was Naudero, where the Bhutto family came from; Panjodero and Ratodero. The fifth name eluded her.

“I’ll get it!” she promised, “I’ll think and tell you.” And then she shook her head and said, regretfully, “There’s no one left who can tell me the name.”

When I keyed the four names into my Google task bar, it promptly threw up other names, including Banguldero. My mother’s amazement showed me that to her mind, those villages had simply stopped existing when she and her family left Sindh, never to return.

In your paper presented in the seminar you quoted a couplet of the Sindhi poet Prabhu Wafa: “Whenever you find your people, call it home. Whenever you find Sindhis, call it your Sindh.” Does this apply in your case?

My mother’s family came from Sindh. She and older siblings were fiercely proud to be Sindhis. And somehow we were not included in that umbrella of Sindhi-ness. So though I grew up not knowing anything about Sindh and what it meant to be a Sindh, I did grow up with an understanding that there was something essential to my mother, which I was not and could never be a part of.

Will you share your feelings and the experiences during your visits to Pakistan?

During my two short trips to Sindh, I experienced a wide spectrum of feelings. One was the excitement of visiting a region that is so intimately a part of our lives and yet forbidden to us. Another was frustration and unhappiness with the difficulty of entering and the restrictions on free travel. Yet another was the longing to visit an ancestral homeland, and delight at doing so. A fourth was the fear of being in a country where we are officially perceived as enemies. If war were to break out while we were visiting, what would happen to us? Karachi has the reputation of being a violent and dangerous place. However, most important of all has been the love that we were showered with. I should also say that my first visit to Sindh was the most exciting and most meaningful trip I have made in my life. The warmth and hospitality my family and I received changed our feelings towards not just Pakistan but towards humanity as a whole.”

When you told your mother about the love you received in Sindh, what was her response?

My mother and her siblings were very surprised but also happy to hear about the love and all the messages to them from people in Sindh. In the past, nobody in the family had ever spoken about Sindh. They had deliberately put it out of their minds. So it was something new and totally unexpected. I felt a lot of latent emotion in them. None of us said it aloud, but I think we all missed my grandparents and wished there was a way for us to tell them about it.

Do you think you are now in a better position to understand Sindh and its people and can write another book on this subject?

I have collected many more interesting stories and intend to compile them into a sequel. Each of them gives a different insight into Sindh, the Sindhi experience, and the Sindhi psyche. In India we have a one-dimensional stereotype of Sindhis as calculating and profit-oriented. Even when people speak positively about Sindhis, they will use adjectives like ‘hardworking’ and ‘enterprising’, which directly relate to this one-dimensional stereotype. In Pakistan, I saw that Sindhis are labelled too in a limiting way, different but also deprecatory. One reason why Sindhis are misunderstood is because they have a unique culture, which has been misunderstood. I feel that these stories will help people, in particular the Sindhis themselves, to understand that unique culture.

Do you think India and Pakistan can ever become good friends?

India and Pakistan were one land, one people with a common history and cultural kinship. How different are Bombay and Karachi, how different are Delhi and Lahore? People look alike, they sound alike; their body language and core ethics are similar. When I travel to Calcutta, Delhi, Madras or other places in India, things are similar but not quite the same as they are in Pune where I live. Often there are strong regional variations. People can see from the way I dress and speak that I have come from somewhere else. Yet they know that I am one of them. Why can’t it be the same when I come to Karachi too? It is vested interests, which have kept us apart, and it would be extremely difficult to overcome their power and wealth to become good friends.

Would you advise the Sindhis living in India to visit their homeland at least once in their lifetime?

Sadly, most of the migrant generation is no more. Those who lived in Sindh and have memories of a lost childhood home would be over 70 years old. I doubt if all of them would have sufficient motivation to tolerate the rigour of the required paperwork and travel. As for younger Sindhis, they feel much more rooted in the place where they live than their lost homeland.

To my mind, for them to come to terms with their identity, a visit to Sindh is only one of the things they need to do, and not one of the most essential. Having said this, I must also say that when an Indian Sindhi meets a Pakistani Sindhi, for both of them it’s like looking into a mirror for the first time. There’s a feeling of magic and wonder in the air, like when two long-lost brothers suddenly find each other. It is a miraculous, amazing and uplifting experience, which I wish every Sindhi could have.

How can writers play a positive role in promoting peace?

Good quality writing is enjoyable, but it is also much more than that. Through it, readers come closer to understanding themselves. When we understand ourselves better, we realize that one of the highest human priorities is a safe and peaceful existence and a certain degree of comfort, replete with human bonds of love.

The writer is a poet and Editor at www.jang.com.pk He tweets @faziljamili

Two recent Track-2 initiatives between Indians and Pakistanis underscored the need to ease travel, trade and visa restrictions between the two countries and let people meet A humanitarian move