Jan 15: Stick with love and #pray4peace 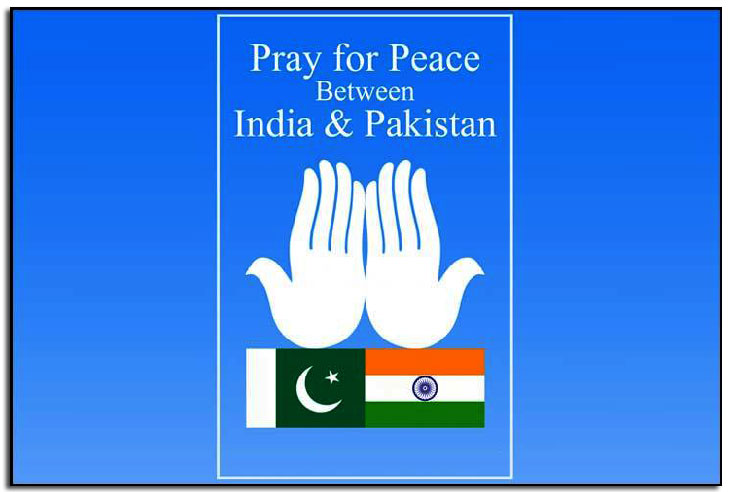 On Jan 15, join in prayer, meditation, and send good vibes for talks to continue between India and Pakistan

In the wake of the Pathankot attacks, peace is the need of the hour in both India and Pakistan. And unlike perhaps what has happened in the past, people originating from both sides of the border are now making their voices heard in one form or another.

In the words of the African American civil rights leader Martin Luther King Jr, “The cup of endurance runneth over.”

We are fed up of this gibberish year after year. And by the looks of it, the current leaders of both countries probably realize this too, be it emotionally or practically. But in the name of terrorism, the tendency for many is to leap back. So given that the average Indian or Pakistani is not a terrorist, why should everyone else suffer for the mistakes of a misguided few?

If India and Pakistan developed better relations, less lives would be lost, more money could be spent on social programs and more tourism and commerce could progress in both countries. In fact, when I visit Koteshwar, Gujarat and see Pakistan in the distance by water, I can’t help but reflect on how colossally stupid these impediments are.

If this was neigbouring Canada and the U.S., or Britain and France, people would have been going on cross-border ship tours.  At the Niagara Falls on both sides of the border in USA and Canada, the Maid of the Mist Tour is famous for taking people along falls on either side in the water. Relations are relaxed and cordial on both official and civil levels.

As an Indo-Pak peace activist, I can’t emphasize enough the need to support the different peace campaigns that different people keep coming up with. At this moment, I am encouraging people to pray or meditate in their own ways for Indo-Pak peace through the Pray for Peace campaign on Jan 15. The idea is based on the power of prayer when done in huge numbers.

The date is doubly special for me for two reasons. The first one is because it is Martin Luther King Jr.’s birthday. It was Dr. King’s leadership that drove and won the fight for civil rights for African Americans in America in 1962 through peaceful means. Until then, African Americans did not have the right to vote and were not seen as being equal to white people. They were segregated and had to restrict their movements to designated areas.

Dr. King, a Christian priest, was inspired immensely by both his own religious faith and Mahatma Gandhi’s ideas of protest through ahimsa or non-violence.

What could be better than hosting a day of peace on the birthday of a man of such great inspiration?

The second is because this also happens to be the festival of Makar Sankranti, celebrated in many Asian countries including India. It signifies a new harvest season and the position of the sun going northwards as the zodiac Capricorn is believed to enter. The sun going upwards is also taken as a symbol of elevating one’s consciousness or striving to be a more positive and better human being.  This day is also seen as a day to give of oneself with various interpretations.

So I can think of no better way to give of myself or try to make the world a better place through my presence than by encouraging everyone to do the following three things at this point in time:

Keep the pressure on India and Pakistan to continue their peace talks and attempts at better relations. I know of three citizen-led initiatives that anyone, anywhere can participate in:

2) Condemn ‪#‎Pathankotattack and demand the continuation of dialogue between India and Pakistan – sign the petition started by Saeed Ahmed Rid.

3) Pray for peace on Pray for Peace Day, Jan 15, morning USA time and evening in India/Pakistan, an initiative I started. See Facebook event for details

The choice I am presenting everyone with is to stick with love that I know people on both sides possess immensely. Because in the words of Martin Luther King Jr. “I have decided to stick with love. Hate is too great a burden to bear.”

Swati Sharan is a Canada-based freelancer and the publisher and co-writer of ‘Hello Gujarat: An English Edition of Gujarati Achievers’. For more info on Celebrate Days for Peace,
email: [email protected]

A new year, a new calendar – for peace 'Ghulam Ali has been and will remain one of us'