Journey to a long-lasting peace 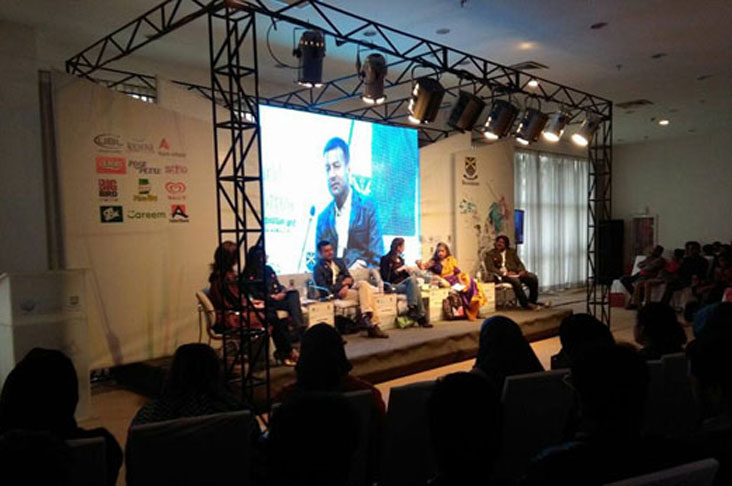 The writer speaking at the Beaconhouse International Conference "World of Tomorrow", Islamabad

In December 2016 I was pleasantly surprised to get a message from Mr. Kasim Kasuri in Pakistan inviting me to attend the Beacon house International Conference on the “World of Tomorrow” as a Keynote speaker. Clearly, despite tensions between our two countries, there are people who still believe and support peaceful cooperation between us.

Kasim Kasuri particularly liked my endeavor to make the first ever Indo-Pak joint feature film “Ye Raste Hain Pyar Ke”, casting actors from both countries, to be shot and produced on both sides. I wrote the script after having researched the subject for five years, while working with youth from both nations on various collaborative cultural platforms. I have even spoken to Fawad Khan to play the lead role; he liked my script and has shown interest in being part of this venture.

A classical music baithak in Islamabad

I readily accepted Kasim Kasuri’s invite. The other delegate from India was Shubhendu Sharma who runs a unique organisation developing urban forestry. They work on contract with corporate and public sector companies, to develop planned forestries in their vicinity.

Then began the mammoth task involving a long and complex process to obtain a visa. I must congratulate the team of Beacon house, led by Najam ul Assar, who went all out to get the clearances. I later learnt he literally followed up with the relevant ministries for clearance almost daily for about two months. Ultimately these efforts along with those by many other Beacon house team members were successful. We got the requisite permissions just a half day before the seminar, taking place on March 11-12, 2017 in Islamabad.

At an operational temple in Islamabad on Holi-day

Najam snapped into action to arrange for our travel and sent chief of their security team to receive us at the border. Shubhendu and I were driven comfortably to Islamabad where we were lodged at Hotel Ramada. The picturesque surroundings of Islamabad and the cool breeze blew away any tiredness from the journey.

Kasim hosted a lovely dinner at Bani Gala near Rawal lake, where the cold night got us all shivering. A Pakistani friend said one can never predict weather at Islamabad. From hot and humid it can go to showers that cool the entire atmosphere suddenly.

The Conference, held at the Pakistan China Convention Center, was structured around four parallel sessions addressed by noted personalities from across Pakistan and other countries.

At my session titled ‘Art Without Boundary’, the other speakers included Haider Ali, a well-known truck artist, who has taken truck art to international frontiers, including the USA and India. Gillian Rhodes from South Korea, a practicing experimental dancer, shared her experiences taking her art to other places too.

The most inspiring speaker was Sheema Kermani, a well-known classical danseuse and theater personality. She spoke her heart out, especially about the significance of art for feminism and the invisible boundaries that women have to overcome to pursue an art form. Her heart-wrenching talk was an eye-opener.

I spoke about taking art beyond borders and how artistic collaborations can help to ease tensions and build bridges for strained relationships. The session was well moderated by the change activist Sidra Iqbal.

Beacon house volunteers, including students under the guidance of teachers, managed the conference ably. The event culminated with a memorable celebratory concert by Ali Azmat, a message of love and a pledge to meet again.

With students of NIPS at Quaid-e-Azam university- Islamabad, after delivering a talk on Creativity in South Asia

Since it was Holi, a major festival for Indians, the organizers were kind enough to allow me to go on to the stage before Ali Azmat, and I took that opportunity to greet the crowd and wish everyone “Happy Holi”.

I stayed on for another couple of days at Islamabad to see the city. I visited the inspiring cultural organisation Lok Virsa and was particularly amazed to see its museum. Lok Virsa has ably preserved Pakistan’s heritage in the realm of music, literature, shared traditions, faith, local and folk culture. It also has vast resources of authentic books and videos, well researched by scholars. I collected some books, videos and music CD’s from Lok Virsa. It was an enlightening feeling being at Lok Virsa, that I feel unable to express in words.

A friend took me to visit the Pakistan National Council of Arts (PNCA), another place that enthralled me. I thoroughly explored its museum that contains some fine art works.

I so yearn for doing some joint collaborative works in the space of art and creativity, where students from both the nation gets opportunity to work together, learn from each other and enrich their wisdom. May be this longing desire will turn into reality in times to come.

It was particularly a great pleasure to meet Director-General of PNCA, the well known artist Syed Jamal Shah, a profound supporter of artistic collaborations and believer in oneness of South Asian art and heritage. He wholeheartedly commended my endeavor to make a joint Indo-Pak feature film, and promised all possible support in achieving this dream.

Art and culture are the most effective and lasting means of establishing dialogue and bringing people closer, he said, adding that our countries share history, culture, dreams and aspirations and we should also share achievements.

I have received similar views and support from reputed individuals in both nations with whom I have discussed my film plan – including Mahesh Bhatt (my mentor), Shyam Benegal (my guru), Pakistani businessman Amin Hashwani, artist and teacher Salima Hashmi, besides many others from all strata of society.

Despite all the political rhetoric from either side, the unequivocal support I have received has further strengthened my belief in humanity, compassion and love. I am convinced that this is the only path to finding reconciliation and a long-lasting peace in our region.

Later I visited Saidpur village on the outskirts of Islamabad. This is an ancient village, a mosque standing near a Hindu temple and Gurudwara structures along with a Sarai, a place to stay for travelers of all faiths. Saidpur tells the story of an inclusive and mystical past. At one corner, a lone musician was engrossed in playing some old Bollywood tunes on his Sarod. I was captivated in the aura of the surroundings and spent some time in solitude, imbibing the mystical vibes.

The next day morning Prof. Saeed Ahmed Rid invited me to deliver a talk at the National Institute of Pakistan Studies, Quaid e Azam University- Islamabad. Talking to students and professors at the Institute was one of the highlights of my visit. I talked about art and cultural spaces in India, my idea behind the Indo-Pak joint venture film and addressed some misconceptions about how we perceive each other. Some students were also keen to join my film production team, to assist.

One student wanted to know how he could make a career in acting, while a girl was a very good singer wanted guidance in perusing her talent. I immediately connected them to PNCA that I had just visited, as an apex body of art in Islamabad, PNCA regularly organised workshops and training in music, art and drama and also produces some good events.

The temple structure at Saidpur village

That evening an old friend Nazoora brought along two other friends to see me. She has recently completed a post graduate degree from London, and returned to Islamabad to work in her old field with international NGOs. Although we were meeting after six years, it seemed like just yesterday. Over the years, we have shared a beautiful bond of friendship, and spent a pleasant couple of hours chatting and laughing about the old memories and updating each other about recent years.

This new beginning shows a silver lining and revives hope that artistic collaborations in creative spaces can start soon. This will also pave the way for our beloved stars like Fawad Khan, Ali Zafar, Mahira Khan, Marwa Huccane and others to return to India. It is such collaborations that will to take us on forward on more artistic and creative journeys together.