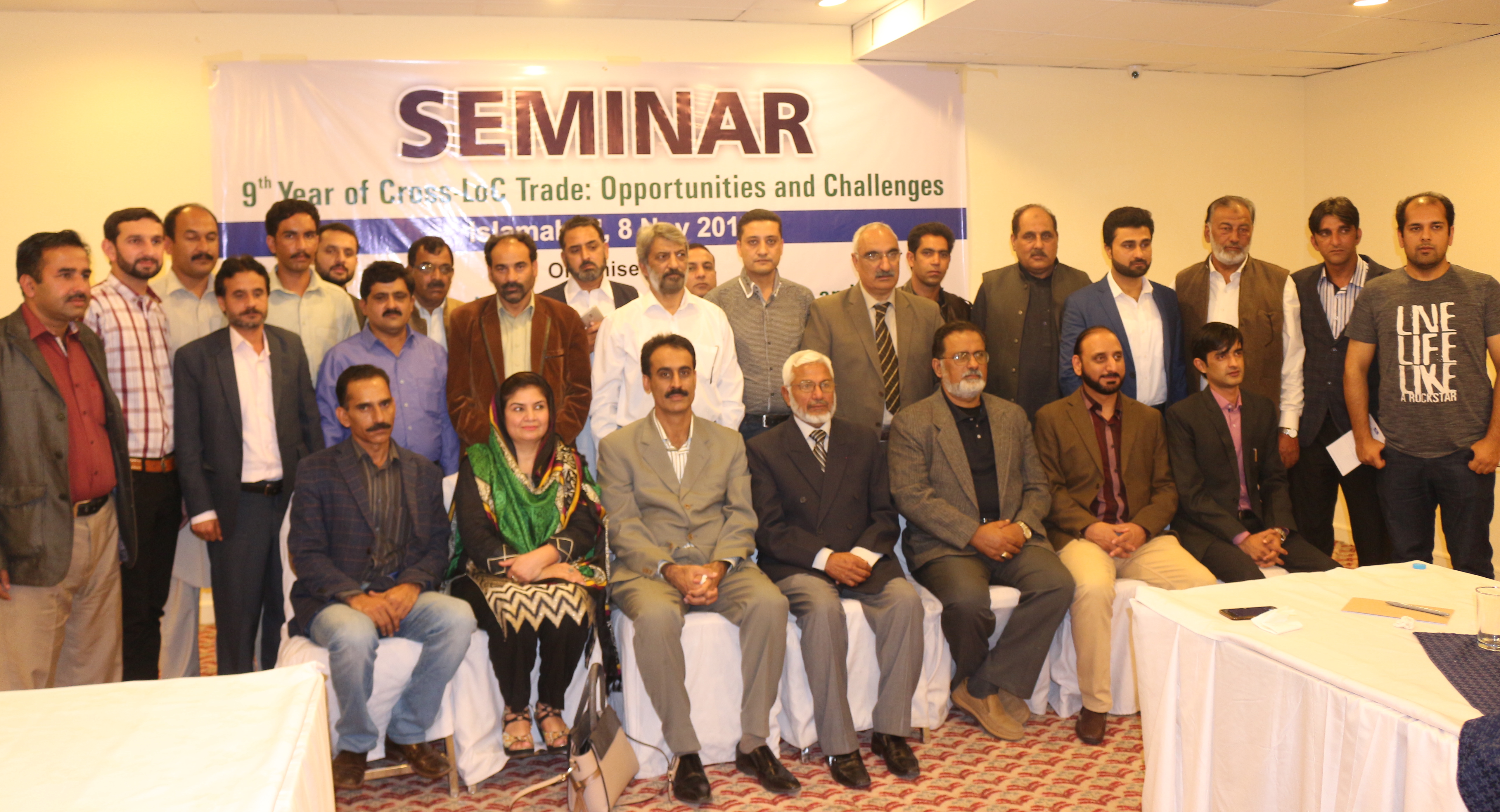 To commemorate the ninth year of cross-border trade across the Line of Control (LoC) on divided Jammu & Kashmir, the business community and traders of Azad Jammu and Kashmir (AJK) held a seminar in Islamabad on Nov. 9, 2017, chaired by Speaker AJK assembly Shah Ghulam Qadir.

Cross-LoC traders, political party and civil society representatives and senior government officials including Director General Trade and Travel Authority (TATA) participated in the event, organised by the J & K Joint Chamber of Commerce and Industries (JKJCII) along with the Cross-LoC Trade Union.

President Cross-LoC Trade Union) Sardar Kazeem highlighted the importance of the trade, which reached a volume of nearly half a billion USD this year despite the hurdles and interruptions caused by ongoing shelling across the Line of Control (LoC). The conflict forced trading activity on the Poonch-Rawalakot route to come to a halt for almost four months.

He also requested authorities to permanently resolve issues like the customs department’s confiscation of trucks and goods on the account of nonpayment of duty. Traders, he said, should maximize this opportunity for the benefit of local communities.

Ghulam Murtaza, President AJK Chamber of Commerce highlighted the various issues arising from the way the customs authorities and Federal Board of Revenue (FBR) handle taxation and trade. The people of AJK, considered ‘non-residents’ by FBR, pay 19 percent GST on imported goods compared to the 17 percent levied in Pakistan. Secondly, the lack of a clear customs policy for Cross-LoC Trade causes problems for vehicles carrying goods once they enter Pakistan. Third, since businesspersons from AJK are not considered as tax filers, they cannot compete in any tender or bid in Pakistan.

Murtaza also highlighted the “humanitarian angle” of the cross-border trade. Currently “the only mode of our communication with people on the other side”, it serves to strengthen relationships based in centuries’ old bonds.

Seminar participants highlighted the importance of the cross-LoC trade for AJK’s economy and urged the government to upgrade and connect these routes to MMM (Mansehra, Mangla Muzaffarabad) being built under the CPEC route. Peace on the Line of Control in Kashmir is essential for this, along with better facilities of banking, scanning and manufacturing that the government should provide inside AJK.

This trade has enabled “two generations meet and know each other”, said Mehmood Dar who has been involved with it since its inception. He urged the governments of Pakistan and AJK to take immediate steps to resolve the issues of drivers arrested on the other side due to charges of smuggling and requested government to facilitate procedural issues.

Director General Trade and Travel Authority (TATA) Brig (retd.) Tahir said that he fully supports steps to resolve the traders’ issues. He has already taken up custom and duty issues with the government and hopes that the matter will be resolved.

“We are looking to build warehouses for this trade, and other infrastructural needs will be met with the support of all the stakeholders”, he said.

Brig. Tahir said that the arrest of truck drivers has been taken up at the appropriate level and steps are being taken to prevent such arrests in future. On future of cross LoC trade, “we should move forward, there is no backward movement, this trade will expand and it is expanding”, he added.

Concluding the seminar, AJK assembly speaker Shah Ghulam Qadir appreciated the traders for trying to strengthen local trade and economy. He stressed the importance of this trade as the only confidence building measure (CBM) between India and Pakistan on Kashmir that has a local ownership and that’s the reason why it has been able to sustain itself.

Qadir said that it is the triangular model of governance in AJK, involving the Kashmir Council and federal government, that creates issues of taxation, increases GST, and scarcity of open markets inside AJK. He said the government is doing its best to amend the model and will soon come up with a detailed plan that will make cross-LoC trade easier.