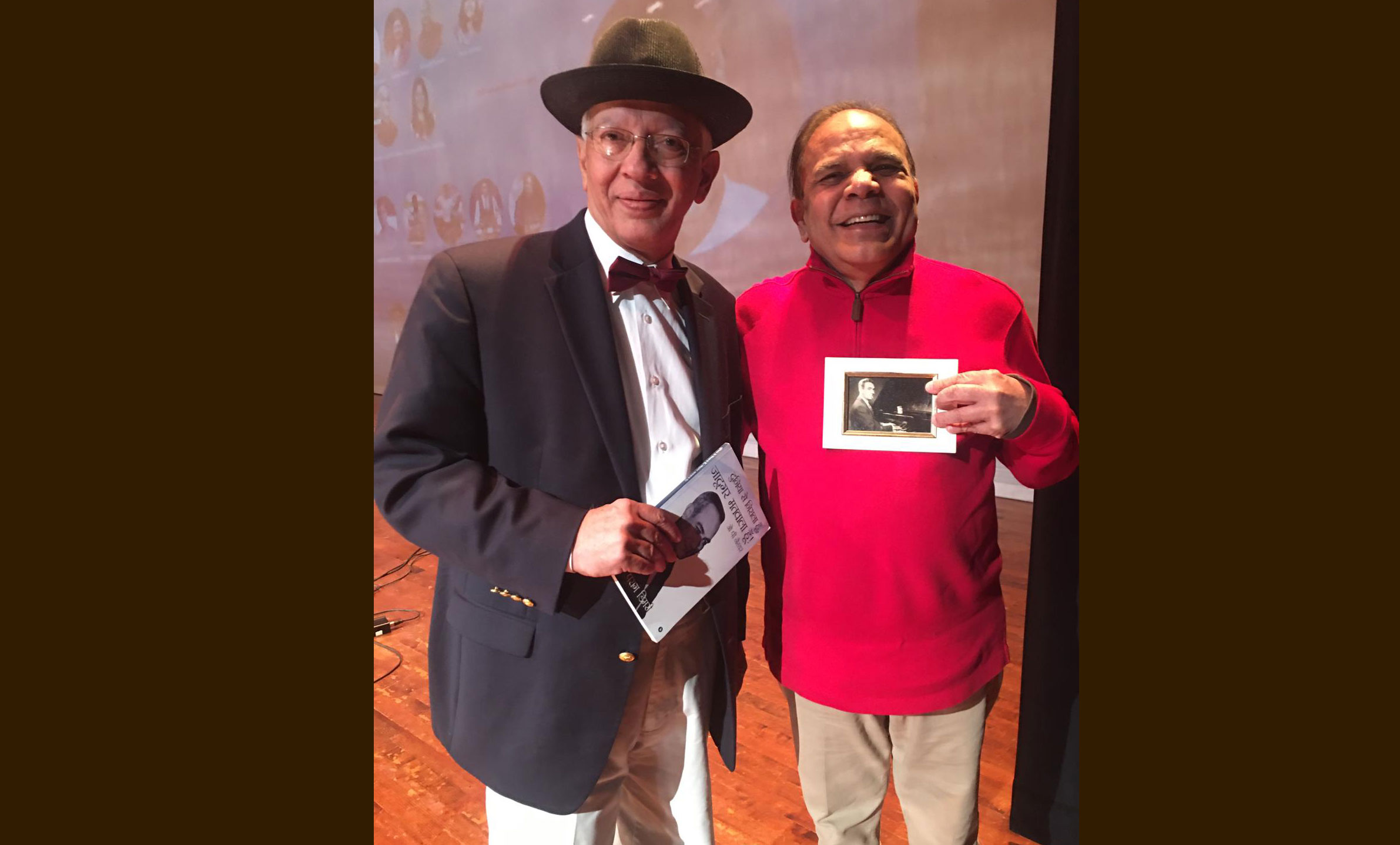 The latest edition of our OP Nayyar concert took place November 9, 2019, put together by Sur-Dhanuk-Dhun, a group of music enthusiasts committed to Indian music, both old and new, performing in the Washington DC area. Formed in 2008, SDD’s goal is to entertain while raising funds for charity.

I had landed in the city and met the team members, some for the very first time in person, for our final rehearsal just the day before, unable to reach any sooner due to a family health emergency in Atlanta that I had been attending nearly a month.

Our theme this time was “Baharein Phir Bhi Ayengi” (Spring Will Still Come), named after actor and director Guru Dutt’s last production. He had completed only 10% before passing away suddenly in October 1964.  OP Nayyar’s brilliant musical score contributed significantly to the movie’s commercial success when it was eventually released in 1966.

Over the past months I had worked with the Sur-Dhanuk-Dhun team, mostly amateurs based in the DC area, on the song selection, sequencing, songs-singer assignment and the script. Now here I was on stage accompanied by my co-emcee Shalini Srivastava, who works in the tech industry. I was dressed in attire from O.P. Nayyar’s wardrobe, complete with his over-sized shoes and hat, trying to emulate the great man also by conducting music on stage to bring our music as close as possible to the original. Shalini changed into five different saris during the programme.

Reciting lines from the entire script, together with song intros to the audience, with nothing to read from, added to the suspense and the fun. How we survived all that, I will never know. But here we were, bringing people together, bonded and connected through music. To the mostly Indians and Pakistanis in the packed auditorium, for at least a few hours, Kashmir was not in the hands of politicians, but with the people who believed in peace through music and to whom Kashmir ki Kali (The Flower of Kashmir) was the movie which unified people, not divided them.

Sahir Ludhianvi’s song Pyar Par Bus To Nahi Hai (To love is not in my control) from Ismat Chughtai’s movie Sone ki Chidiya (The Golden Bird) was presented in a unique manner. The original song only had the humming from Asha Bhosle’s voice. The male voice was Talat Mahmood. At Asha’s request a female version was recorded but not included in the film. We combined the lyrics with the official Talat version and created a duet of our own. Towards the end, the Taanga medley, a collection of OPN songs with the taanga beat as the common thread each continuing after each other seamlessly, set up a tempo that the audience joined in for. Many got up to dance; some even jumped onto the stage.

It was a spectacular show from every perspective. “A musical marriage of fact and fiction”, to quote an audience member who came backstage. The fiction element was clearly me.

Thousands of miles away in India at around the same time, over 8000 fans in a Facebook group called O.P. Nayyar – The Soulful Magician, were voting to compile a list of Top 10 OP Nayyar songs that are as popular today as when they were first released. Following is their list, not presented in any particular order. Take a deep breath, read on and try not to be surprised or disappointed, if it doesn’t include your favourite. It is based on a collective decision representing the songs that the maestro is identified by and linked with across the years.

One of the first big hits from Aar Paar – a Guru Dutt production, which made people sit up and listen to the composer who had just landed with a bang. Even now, this song sung by Shamshad Begum continues to one of the first to come to mind on mention of OPN.

Another song from Aar Paar, sung by the inimitable Geeta Dutt in her sensual voice, is as fresh now as it was when it was first released. A hit, even as a ringtone.

Difficult to believe even now that the censor board removed this song from the movie CID. Not just that, it was even banned for many months on All India Radio after its release in 1956, all because of a four-letter word — FIFI, which was basically Geeta Dutt’s idea, for a random but catchy word that could mean anything to anyone. CID was a mystery thriller anyway, so it was considered cool to leave people guessing. Radio Ceylon, thankfully, continued playing it, and it remained on their charts for a long time. In 2015, the song finally it made to the screen after 60 years, when it was included in the movie Bombay Velvet.

An amazingly catchy duet sung by Geeta Dutt and Mohammed Rafi, which one never tires of listening to. Penned by Janisar Akhtar, father of Javed Akhtar.

A few years ago, I watched CID again, this time with English sub-titles. This is how this song translation read:

“The signal came through the eyes. I received a life support system by just sitting around.”

This breezy duet penned by Sahir Ludhianvi for Naya Daur (1957) was picturized on screen by two senior stars who we are fortunate to still have among us, Dilip Kumar and Vijayanthimala. This lively melodious song, sung by Asha Bhosle and Mohammed Rafi, just sweeps you away.

Many say that just this title song of Tumsa Nahi Dekha alone, established the career of actor Shammi Kapoor.

There is a story about a tangewala in Bombay who used to charge higher than the normal rate and yet people still traveled with him. The secret was the man’s talent as a singer – he would sing OPN songs along the way and the passengers experienced the rhythm provided by the hoof-beat from his horse.

This duet from Kashmir ki Kali will easily go down as one of the liveliest duets recorded in Bollywood. Sheer magic created by lyrical poetry, two voices and a brilliant composition blended together perfectly – a painting in words and melody

This is one of almost 100 songs penned by S.H. Bihari and composed by OPN, in a partnership stretching over 25 years. OPN called him Shayer-e-Azam (The Great Poet) and once said that even if all other Bollywood songs were forgotten with time, this one would remain alive, primarily because of its lyrics.

It simply boils down to this. If you do not like this song in its first 10 seconds, even before the vocals start, you are not quite a music-lover. Call it a litmus test.

This is Asha Bhosle’s voice modulation at its very best. It really doesn’t get any better than this. A classic all the way and one of OPN’s best creations.

Although just an “item song” of that time, this female duet, surprisingly, turned out to be one of the maestro’s biggest hits. I especially like the way the opening musical piece works up to a crescendo before it unfolds the vocals after a good 90 seconds.

Pran jaye par vachan na jaye was the last movie of the OPN-Asha musical partnership and this song the very last they recorded together. In fact, their relationship had become so toxic that Asha even ensured that the song was dropped from the film altogether.

However, not only did the song become a superhit, it also bagged the Filmfare award for the best song of 1973 – a ceremony which Asha Bhosle decided not to attend. When OPN was requested to come on stage to accept the award on her behalf, he was gracious enough to agree.

However, on the way home late that night with lyricist S.H. Bihari, he rolled down his car window and flung the trophy out. There was a loud echoing sound as it hit a lamppost and shattered into pieces. I have this story from the horse’s mouth.

That sound became symbolic of the end of their 14-year musical romance, after which they never stood under the same roof again. But by then, the song was already being talked about as a classic and OPN and Asha Bhosle had become part of Bollywood’s folklore.

OP Nayyar – the man, lived on for another 34 years until his death in January 2007, but OP Nayyar, the composer, had already died long ago, perhaps when he shattered the trophy.

The last message he left for his fans and for the world at large is this short poem penned in the mid-1990s:

(One day I will be hidden from every eye but

Will live on inside the beat of every heart

I will be lifted up but will remain in this gathering)

Karachi-born, Boston-based Siraj Khan is a connoisseur of South Asian film music, using art and culture to build bridges. A global finance and audit specialist by profession, he has written scripts and directed concerts in USA, South Asia and UAE. He has worked with the government of Pakistan and sits on the board of several non-profits and charities in the US, Pakistan and India. Siraj has been recognized for his work towards women empowerment and services to children and youth.

One thought on “Keeping the OP Nayyar torch alight”