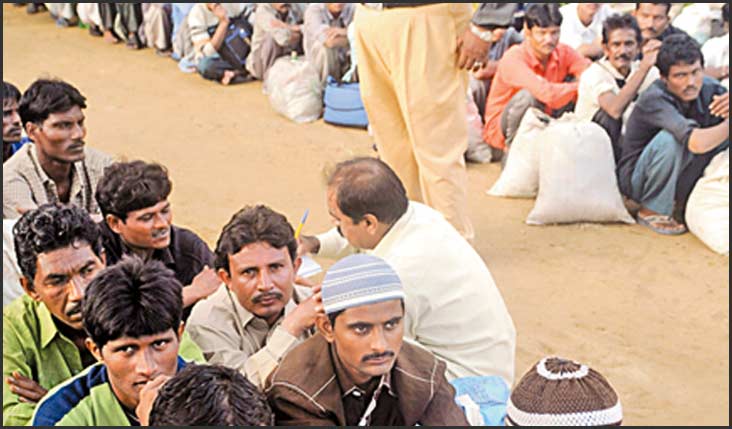 The released fisher men traveled to Lahore by three buses. Once they reach Lahore, they will be handed over to the Indian authorities at the Wahga border. The Sindh government, following the decision of the Supreme Court of Pakistan, ordered the release of all the 442 Indian fishermen languishing in provincial jails, Naushehro Feroz, Badin, Nara Jail and Malir Jail for the last three years. The first batch was released on August 30, 2010.

Sadhu, son of Lakha, 63, said it was the second time he was arrested and put in Pakistani jail. Earlier, five years ago, he spent 18 months in the jail. “It is a disheartening experience to be in jail,” he said while giving his reaction as he stepped outside the jail gates. He said that he has one son, who after marriage is living separately and he has to take care of his wife and children. He said, “I have become so fed up now and will not resume fishing because I cannot perform well and will not bear the torture and cruelty.”

There were nine Muslims among the released fishermen who worked at Pore Bunder, Okha Bunder and Jakhu Bunder, and fishing is their traditional source of livelihood. They are happy about the fact that they will celebrate Eidul Fitr with their parents and relatives. Relatives of some of the Indian fishermen living in Karachi came to exchange greetings but the administration did not allow them to meet with anybody from India. Earlier, during their stay in jail, their relatives took care of them and visited frequently.

Majority of the released fishermen are young and were arrested for the first time. Ismail, son of Sattar, said that they could not guess the territorial boundary in the sea while high tides push their boats and they turn victims. Their experience in district jails was too harsh.

Manu, son of Heera, hails from Kajri village of Junagadh. He has two minor children and a wife but is unaware of their well being. “I was the only breadwinner. I have spent 22 months in jail here,” he lamented.

A PFF spokesman said they receive parents and relatives of Pakistani fishermen detained in Indian jails for their safe release. Mostly, the fishermen languishing in Indian jails belong to Thatta district, except few from Karachi’s neighbourhoods, he added.

Meanwhile, a three-member delegation from Pakistan comprising Justice (retd) Nasir Aslam Zahid, Karamat Ali, Director Piler and Advocate Iqbal Haider left on Monday to visit New Delhi from September 6 to 9 to meet with the civil society organisations and the Indian government authorities to ensure the safe release of 158 Pakistani fishermen before Eidul Fitr. During their stay they will meet with the Pakistan High Commission officials, leaders of the Congress Party and ministers.

In a joint initiative by civil society organisations and peace activists from Pakistan and India, the issue of fishermen was raised at major forums. Both sides filed separate petitions in their respective superior courts for the release of detained fishermen on humanitarian basis.

'We remain committed to assisting the people of Pakistan...' Aman ki Asha: Indian IT delegation due in Dec