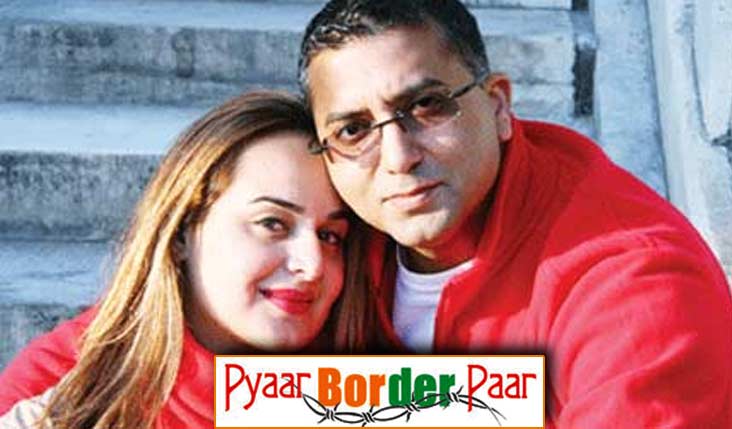 Sarah Ahmad and Gagan Suri, both of Punjabi origin, have been married for eleven after dating for four years. They live in Riyadh with their two sons, aged nine and six.
By Laaleen Khan

In this day and age, when a handwritten love note instead of an email or text is considered special, Sarah got an entire book. Gagan’s debut novel, 65 West 55th Street, poignantly fictionalises their real-life love story. Excerpt: Love goes beyond boundaries. To all those who go against convention and dare to love someone of a different religion, culture, or country, believe in yourself,’ and what will remain is true love.

“This is the main message of my novel, a fictionalized memoir,” says Gagan. “The story is not just about a Hindu-Muslim; it is not about a Pakistani- Indian. The novel goes well beyond these concepts, it is applicable to any two people of any two different backgrounds.”

A graduate of Parson’s and the Fashion Institute of Technology in Manhattan, Sarah has worked as a fashion designer for top retailers in the USA. In Jeddah, she now teaches fashion design to university students, besides volunteering with special needs children at the Help Center.

Gagan was born at India’s Military Headquarters of War (MHOW). He has an MBA and a degree in Hospitality and worked for Hyatt Hotels and at international investment banks on Wall Street as well as in Toronto, London and the Middle East. Gagan enjoys photography, singing, playing the guitar and harmonica, and is a budding author.

Ethnic and spiritual background Sarah: I am a Punjabi, Sunni Muslim from Pakistan. I have a very strong relationship with God, which I am rather private about. My general belief is that He is God of all mankind so I try to live a life free of prejudices and racism and give as much charity as I can. I pass the same teachings on to our kids.

Gagan: I was born and raised a Hindu. I decided to convert to Islam to get married to my wife. In practicality, I believe in one God and being a good human being. I tend to not follow rituals.

How they met Sarah: I’d graduated from university when I met Gagan on a blind date in New York City. Since I had spoken to him on the phone quite often before we met, I already loved his personality. It was just a matter of meeting him. As soon as I saw him, I knew he was the one.

Gagan: At the time, I was working in Washington D.C. We knew right away that we wanted to get married to each other, so early on in the relationship we started working towards that goal. I knew she was the one from the first moment I saw her inner and outer beauty.

The proposal Gagan: My proposal to her was very unconventional because it happened at a police station in Toronto. I’ve described it in my novel.

The suri family: On holiday in South Africa

Challenges Sarah: At the time of our wedding, our countries were not issuing visas to each other due to nuclear testing so we got married on neutral ground, in Toronto. I was surprised by how similar our family structures were. As a Punjabi, if I had married a Pakistani from another province it may have been more challenging than marrying my Indian Punjabi husband whose parents were both born in what is now Pakistan.

As for religious challenges, they never arose in 15 years because we are respectful to our families’ beliefs and share common ground on what we teach our kids. Due to unfortunate world events and tightened security, I still need security clearances to enter each Indian city despite being a Canadian national. Thanks to our Indian Consulate friends who treat me like family, those clearances get expedited.

Gagan: We faced all possible obstacles. Parents and siblings added a lot of negative pressure and we had to deal with these one by one and win over each situation. I only experienced difficulty getting a visa once, when applying on an Indian passport under emergency circumstances, when my mother-in-law tobe passed away. The visa process has become easier with my Canadian passport. Misconceptions Sarah: Living in the US, Pakistanis and Indians are more familiar with each other’s identities than any other nationality. In Pakistan, everyone who’d meet Gagan would remark, “He’s just like us!” I’d laugh and say, “What did you expect’two horns on his head”

Gagan: I was taken aback by how open the educated society of Pakistan is. It was very easy for me to blend in and be a part of my wife’s family. My parents had a hard time understanding Pakistani marriage rituals, similar but still different from traditional Hindu weddings. Sarah had a lot of misconceptions about Hindus and Sikhs. She asked a lot of questions and when looking for an answer, I found that traditions and cultural rituals are somewhat linked to religion and to an outsider, it is hard to distinguish between the two.

Gagan: Something that surprised me was that Pakistanis cook everything with meat in it.

Lingo Sarah: Sometimes I am surprised by the fluent Urdu I hear my husband speak when he is on the phone with one of my relatives.

Gagan: Apparently, after being with my wife for almost fifteen years, I sound just like a local Lahori!

Sarah: I support Pakistan, Gagan is indifferent. We usually abstain from cricket and Kashmir discussions!

Gagan: I always say, may the best team win. In retrospect Sarah: I am lucky and blessed with the choices I’ve made. My advice to couples is, respect your religious and cultural differences and you will create a common culture based on love and humanity.

Gagan: Believe in your love and stay firm in your belief.

Laaleen is an Islamabad based media specialist and international correspondent.
Twitter @laaleen; email [email protected].
This piece is adapted from her series ‘When Hari Met Saleeha’ in Libas International, Volume 26, Issue 3, 2013.