Mahesh Bhatt ropes in Ghulam Ali for ‘Milne Do’ 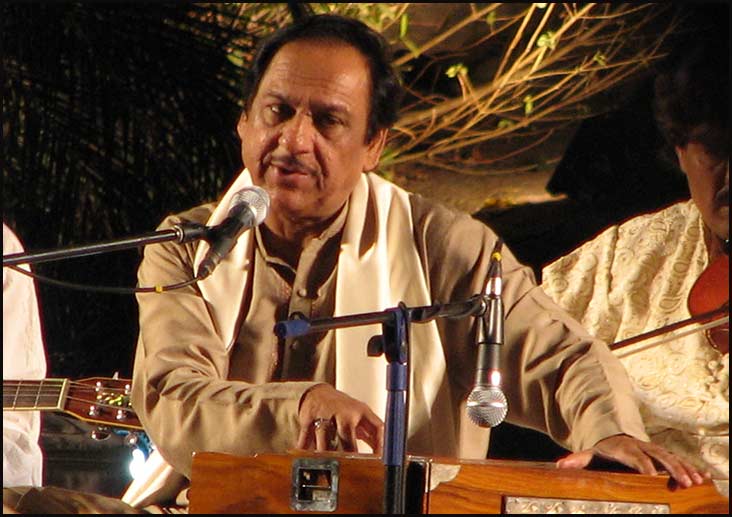 The ghazal maestro will sing for an Indo-Pak play to be staged in April 2016 in India and Pakistan, with live music by the Laal Band

Mahesh Bhatt (center) with daughter Pooja and actor Imran Zahid, who will play the lead role in ‘Milne Do’. File photo

Filmmaker Mahesh Bhatt on Thursday said he has roped in Pakistani ghazal singer Ghulam Ali, who last month called off all his scheduled concerts in India, to sing for his play titled ‘Milne Do’, a collaborative effort of theatre actors from India and Pakistan.

Bhatt, whose play narrates an intense love story between two culturally-crossed individuals during times of hatred, says they want to “stitch” ties between the neighbouring countries with Ghulam Ali’s voice.

“He (Ghulam Ali) has been approached and he has gracefully agreed to lend his voice and be a part of the peace endeavour through performing arts. I can’t say whether he will come to India or not, but he will certainly sing a song which will be a part of the play,” Bhatt, whose 1990 film “Awaargi” featured a song by Ghulam Ali, told IANS.

After facing resistance by Shiv Sena in India last month, Ghulam Ali — who made an entry into Indian cinema with his popular song “Chupke chupke raat din” for B.R. Chopra’s 1982 film “Nikaah” —

cancelled his scheduled performance in Delhi, saying that he won’t return to India until “things are settled down”.

Then it struck Bhatt — a filmmaker who has been initiating cultural dialogue with the audience and artistes in Pakistan through films and plays — that why not use “his voice as the glue to stitch the nations together through this play”.

“Milne Do” will be staged on April 24 next year at Shri Ram Centre here before it travels to other cities of India and Pakistan. Laal Band from Pakistan has composed the music and will perform live during the play, the story for which has been written by Suhrita, the writer of “Hamari Adhuri Kahani”.

Bhatt emphasised that with ‘Milne Do’, they “are saying that the human interaction is the only route through which distances created in the hearts of the people, can be scaled down”.

Mahesh Bhatt’s forthcoming play has been creating a media buzz

The National Award-winning filmmaker had earlier this year taken a stage production based on his 1989 film “Daddy” to Pakistan.

Condemning all the “unpleasant” incidents happening in India, he said: “Ghulam Ali sahab, a world icon, has been a ghazal king for years and has been coming to our country for many years. He had an unpleasant experience here in India and we personally, the government — both in Maharashtra and at the Centre — have without any hesitation conceded that was not the right kind of treatment.”

Ghulam Ali’s concert in Mumbai and Pune was called off last month after the Shiv Sena threatened to disrupt his live performance.