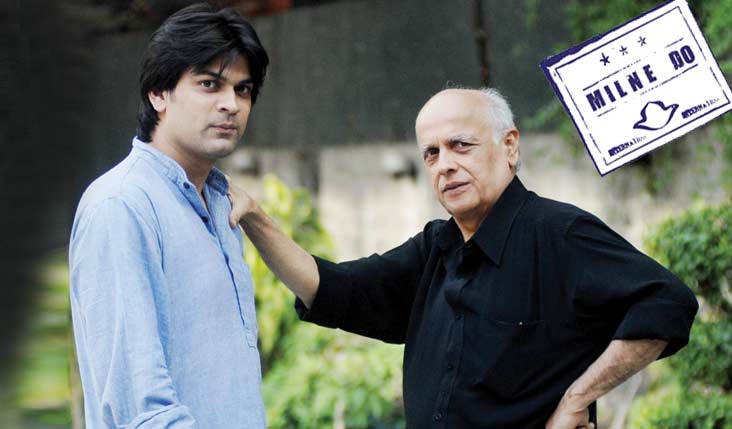 Mahesh Bhatt, in an attempt to find common ground between India and Pakistan,  is all set to produce and present a play titled “Milne Do”.

The veteran filmmaker Mahesh Bhatt, in his ongoing attempt to find common ground between India and Pakistan, is all set to produce and present a play titled “Milne Do”.

“I have always maintained that a movie or a play can be a greater vehicle of peace than all the lectures we give,” he says. “Any message, if communicated through storytelling, touches a chord. We are also trying to do the same. This play will be an emotional transaction between industries on both sides.”

The cross-border collaborative project across borders has been in the making for over a year. It is an “intense love story between two culturally crossed individuals during times of abject hatred, it is aimed at promoting the core message of Aman ki Asha,” says the  Delhi-based male lead Imran Zahid.

On Dec 15th Zahid is going to Pakistan along with theatre director Danish Iqbal. During their four-day stay they want to finalise the script, cast — including the female lead from Pakistan — and design of the play in collaboration with the activist group Azad Theatre, Lahore. Azad Theatre’s Malik Aslam, an experienced director with a host of well-received productions to his credit (including street theatre) will co-direct the play.

They plan to have rehearsals together in India as well as in Pakistan, and stage the production in March-April 2015 in both countries with live music. The popular activist band Laal is already on board from the Pakistan side. From India, Euphoria has given a positive response.

Danish Iqbal has a distinguished career in theatre as well as a solid academic background in the field. A graduate of the National School of Drama, he has an M.A in Classical Acting  from the Central School of Speech and Drama, London, and a PhD in “The Inclusion of Folk elements in Shakespearean Plays performed in Hindi”.

The last play he directed was “Daddy”, a theatrical adaptation of Bhatt’s powerful 1989 film by the same name, featuring Zahid in the leading role. He also played the lead in last year’s stage adaption of Bhatt’s iconic 1982 film “Arth”.

“I think Imran has the discipline and the consistency required to take up projects and deliver quality stuff,” Bhatt says of his protégé. “Not everyone has the tenacity to take an idea from inception to its finishing point”.

“This is my first trip to Pakistan and I’m really happy and excited about it. I was a little nervous so I took extra care with all my documents when applying for the visa but the Pakistan High Commission officials were so warm, welcoming and helpful,” says Zahid, who is keen to meet and interact with students in Lahore.

“Mahesh ji had called the Pakistani consulate beforehand so they were expecting us. It was nice to see their great respect for him. They gave us the visa in just one day, and even exempted us from police reporting,” he adds. “Pakistan’s Deputy High Commissioner Mansoor Ahmad Khan also assured us help in all possible ways to help make it a successful play.” Calling for greater commercial investment between India and Pakistan, Mahesh Bhatt believes that investments in any form will contribute to “harmonious ties and peace between the two countries”.

“People say I have utopian and unrealistic ideas about Indo-Pak relations but I have a firm conviction that through cultural spaces, India and Pakistan can bridge a lot of distances,” says Bhatt.

He gives the example of his own journey as evidence of this belief. “When I began my crusade for stitching these gaps through movies and released films in Pakistan, there were people heckling and sniggering and laughing, saying that it’s an impossible dream. But now Indian movies are being shown in Pakistan, and Pakistani soaps are being shown in India. There are actors and singers from Pakistan working here. We have moved light years ahead in just 10-11 years.”

He hopes that such cultural exchanges will “eventually fulfill the dream of the father of the nation Mahatma Gandhi of the two countries walking hand-in-hand.”

This vision, incidentally, was also shared by Pakistan’s founding father who wanted India and Pakistan to have the kind of relationship that the United States and Canada enjoy.

The enemy within A cross-border royal Rajput wedding