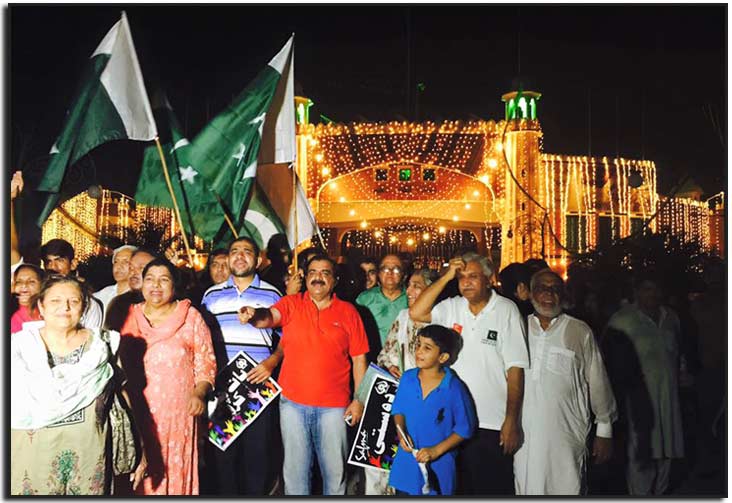 The Attari-Wagah border between India and Pakistan displayed the mix of excitement and momentousness this August 14-15 midnight that it usually does as the two countries celebrate their Independence Days. For this midnight occasion has become its own ritual, poignant and significant in its meaning, for nearly two decades now.

In its theme, thrust and purpose, this August midnight ritual is markedly different from the one that takes place every evening as security forces on either side lower their country’s flag at sunset, known as Beating The Retreat. That has become a jingoistic event with audiences on each side screaming hyper-nationalist slogans.

If the daily ritual is a reminder of the tensions that continue to exist 68 years after the Partition, the annual August ritual at midnight between 14-15 is a reminder that peaceful relations are possible. It is a hope for our future.

The balmy August midnight sees a turnout of peace activists on both the sides of the border, at Attari and at Wagah (Indians inaccurately refer to it as the Wagah border because that place is in Pakistan). This time, about 100 peace activists gathered at Attari and about 70 at Wagah. Unlike the daily evening ritual, there was no show of power and might to demonstrate the country’s strength.

Young and old, men and women, standing up for peace: hope for our future. Photo: Ruby Singh

Instead, the peace activists assembled before the gates on either side carried candles in their hands. Their slogans reverberated in the quiet of the night, hopefully across the border into the other side. “We want bread, not bombs,” they said in one voice; “Liberalise Visa regime” and “Long Live India-Pakistan Friendship”. But the most poignant of all was the lustily shouted, “Hindustan-Pakistan Zindabad”.

For the August midnight ritual, India’s Border Security Force men allowed the peace activists to come closer to the gate and helped in any way they could. The Pakistan Rangers extended similar courtesies to the peaceniks on their side.

We could see candles on the Pakistan side but it was too dark to identify the peace activists there. However, their spirited slogans could be heard loud and clear. One voice we heard that of the well-known Pakistani activist Saeeda Diep, familiar to most Indians working on the issue of sustainable peace between India and Pakistan. She represents a saner voice of Pakistani society, which unfortunately is not given importance.

The assembled activists on both the sides represent many who favour an uninterrupted and uninterruptible dialogue between the two countries. Every time the peace process moves ahead, we see an attempt to derail the process. This pause in the dialogue only helps those who do not want enduring peace between the two countries. It is all the more necessary to continue the dialogue at such a time. Only by talking and talking peace, can we defeat the design of the forces inimical to peace.

The candle-light vigil this time was held against the background of the attacks in Gurdaspur and Udhampur, and the upcoming meeting on August 23-24 in New Delhi between Mr. Ajit Doval, Indian National Security Advisor (NSA) and Mr. Sartaj Aziz, Pakistan’s NSA.

Closed gates, even decorated ones, keep people apart: Indians hold up candles to their Pakistani friends on the other side. Photo: Ruby Singh

The meeting between two NSAs was decided at Ufa, Russia, where prime ministers of both the countries met on the sidelines of the Shanghai Cooperation Organization (SCO) last month. They also decided to follow with a meeting of the Directors General of Military Operations (DGMO) of both countries. This is all the more necessary given the increase in ceasefire violations in the last couple of months.

Mr. Mohammad Salim, Member of Parliament of Communist Party of India (Marxist) attended the Aug 14-15 celebration at Attari. Addressing the gathering, he emphasized the importance of peace between two countries for the development of not only two countries but for all countries of South Asian Association for Regional Cooperation (SAARC). India and Pakistan are major players in SAARC and the regional bloc is virtually non-effective because of the tense relations between India and Pakistan.

Beyond the high-table talk and high-power optics of heads of state lie the intent and efforts of the average citizens such as the August midnight celebration. One such person is Ramesh Yadav, who with his colleagues from Amritsar, has mobilized hundreds of people so far to be at Attari on the midnight of August 14-15 for nearly 20 years. They have also built a Martyr’s Memorial at the border in lasting memory of the lakhs of people who were butchered during the Partition in 1947. 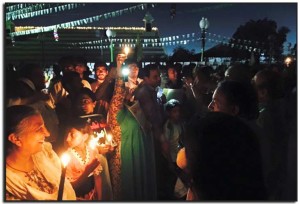 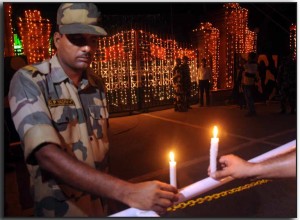 A security guard at Attari on the Indian side lights a candle for peace. Photo: Ruby Singh 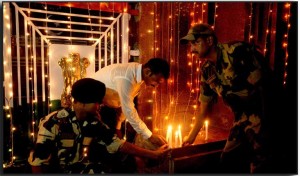 Security guards at Attari on the Indian side facilitate the call for peace. Photo: Ruby Singh

India’s Folklore Research Society constructed this memorial in 1994 in a matter of days. Peace activists usually light candles at the memorial too as they shout slogans at the gate. Ranjiv Sharma of Folklore Research Society said, “Around one crore people lost their home and homeland in the sad moment of the history”. He also said that very few people used to come to watch Beating The Retreat in the early 1990s but now it attracts a few thousand people every evening – a pointer to the increasingly masculine jingoistic view of nationalism.

Against this backdrop, the August midnight joint Independence Day celebration acquires greater significance. Usually, the occasion also sees various activities in Amritsar propagating the importance of peace and the relation between development and peace. This year too, on August 14, there was a seminar on How To Counter Terrorism in South Asia. In the evening a cultural programme with Sufi music and Punjabi songs followed.

The enthusiasm among the residents of Amritsar, among the most affected during the Partition, gives peaceniks hope.

It is time that the saner voices on both sides of the border are heard. It is time to go beyond prejudices and see the Attari-Wagah border as a symbol of peaceful co-existence instead of nationalistic jingoism.

Jatin Desai is a Mumbai-based journalist and activist, currently General Secretary of India chapter of Pakistan-India Peoples’ Forum for Peace and Democracy (PIPFPD)

REFLECTIONS: Independence shouldn't come with restrictions A lion, a tiger, a bear… oh my!