Married across an intractable border: Rajput Sodhas plead for visas 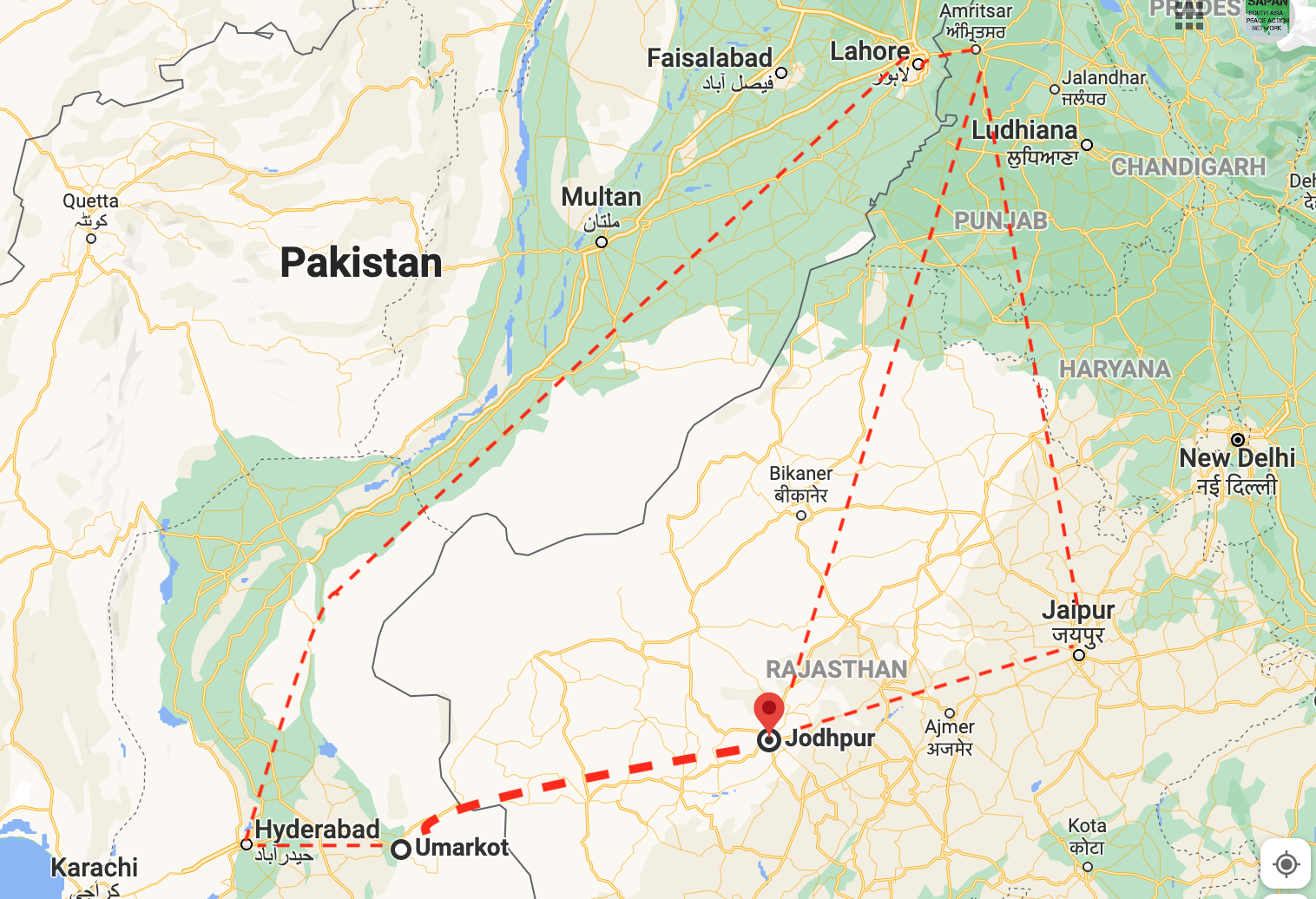 This is the story of Ganpat Singh from Pakistan’s Sodha Rajput community of less than half a million. Like him, each member of this community has matrimonial linkages across the border in neighbouring Rajasthan, India. This is the only way they can keep their community alive, as they are barred from marrying within their own ‘gotra’. A special dispensation over a decade ago provided them relief, allowing six-month visa extensions – but now those who apply for such extensions are being blacklisted, leading to painful and preventable human tragedies

Ganpat Singh Sodha couldn’t go to his mother as she lay dying of cancer at his brother’s house in Jodhpur, India, a little over 300 km from Umerkot, Pakistan, where he lives. Three of his children are in Jodhpur too. He has been apart from them for five years.

A former government schoolteacher of Sindhi in Umerkot — as the Hindu principality of Amarkot was renamed after Pakistan’s birth — Ganpat kept applying for a visa and desperately calling the Indian High Commission in Islamabad.

A former government schoolteacher of Sindhi in Umerkot — as the Hindu principality of Amarkot was renamed after Pakistan’s birth — Ganpat kept applying for a visa and desperately calling the Indian High Commission in Islamabad.

On 20 April 2021, he sent a voice message in Urdu/English: “This is Ganpat from Umerkot, Sindh. I applied for a visa last month also and it was not issued. Now my visa has been rejected again.”

He still has the recording, in which his voice audibly cracks as he pleads: “My mother is on her deathbed. Please issue the visa on humanitarian grounds.”

“We cannot issue the visa as we have not got the necessary clearances from India,” an official texted.

Ganpat found he was blacklisted for ‘overstaying’ his visa when he was last in India. While there, he had applied for a six-month visa extension, expecting it to be granted.

Ganpat belongs to the tiny Rajput Sodha clan, estimated at around 50,000, based in Pakistan. The Sodhas are a minority within the minority Hindu community, estimated to be around 8 million, the largest non-Muslim group in Pakistan’s 220 million Muslim-majority population.

His eldest brother Lal Singh lives in Jodhpur. Their mother Darya Kanwar went to India for an angioplasty in 2014 and stayed on. An older sister is married in the border town of Jaisalmir, India. The second brother Dalpat Singh was 34 when he died of a heart attack in Pakistan in 2004, leaving behind a wife and two minor daughters. Ganpat, 49, is the youngest.

The family in Jodhpur was planning the nuptials of Dulpat Singh’s daughters, Madan Kanwar and Chander Kanwar in December 2016 when Ganpat arrived on a 60-day visa. He applied to the local foreign resident registration office (FRRO) for a six-month extension to stay on for the weddings.

For over a decade now, Pakistan’s Sodha Rajputs have been able to avail of such extensions for marriage-related visits granted by the local foreign resident registration offices in Rajasthan. They can also allow Sodhas visiting Jaipur or Jodhpur to visit cities in border districts like Bikaner, Jaisalmir, and Kuch.

These authorisations for Pakistani Sodhas emerged from the relationship between the Ranas of Umerkot and S. K. Singh, former spokesperson of India’s Ministry of External Affairs, and later India’s high commissioner to Pakistan 1985-1989.

Singh was close to Pakistani parliamentarian and 25th hereditary ruler of Umerkot, Rana Chandra Singh whose wife had had matrimonial linkages to Singh’s family.

The Sodha gotra or lineage is part of the larger Rajput community in SouthAsia. Rajputs marry within the community but intermarriage within a gotra is strictly prohibited. Since 1123 AD when the first Sodha ruler Rana Amar Singh settled in Tharparkar and founded Amarkot, his descendants have traditionally married into Rajput gotras in neighbouring Rajasthan state.

After Independence and Partition 1947, local deputy commissioners were authorised to issue permits for people to cross the border. There was a direct flight between Hyderabad, Sindh, and Jodhpur, Rajasthan, says the Rana Hamir Singh, the 26th Sodha rule of Umerkot.

Before Partition, his grandfather Arjun Singh went by train from Amarkot to Jodhphur. His father Chandra Singh’s barat flew from Hyderabad to Jaipur to bring back Rajmata Subhdra Kumari from Bikaner.

“When my mother missed her favourite food, katchoris and samosas, my father deputed a kamdar to go by train to Jodhpur and bring them to make her happy,” Hamir Singh chuckles at the memory.

Cross-border marriages not just of the royalty but of ordinary Sodhas continue despite increasing difficulties. Since the 1965 war, visa regimes have solidified and become more restrictive.

The Hyderabad-Jaipur flight was suspended in 1965, never to be revived. The train service was cancelled. The Thar Express running between Karachi and Jodhpur was revived in 2006, then cancelled in 2019 after escalating tensions between India and Pakistan.

Since then, the only regular border opening between the two countries is at Wagah near Lahore, 1,200 km north of Umerkot. Special permission is required to cross at the Monabao border, barely 40 miles from Umerkot.

Ganpat’s second wife Dimple has retained her Indian nationality. Son Kuldeep, 7, and daughter Priya, 3, both born in Umerkot, are Indian nationals. The three were in India when the coronavirus pandemic began. They returned to Pakistan in March for some months, going back in November to renew the children’s Indian passports.

It is less than an hour’s drive from Umerkot to Monabao. But crossing at Monabao requires hard-to-obtain special permission from the security forces.

With the Monabao crossing closed, Ganpat went all the way to Wagah border – over 1000 km from Umerkot to Lahore, then Amritsar to Jodhpur — to see off his wife and  children, and later to receive them.

In 2018, the FRRO set up online services to allow visitors to apply electronically for visa extensions. However, several Sodhas told reporter Shishir Arya that they only submit papers physically at the FRROs  (‘Blacklisted’ over visa issues, Pak Hindu Rajputs miss out on funerals, weddings, Times of India, 1 Dec. 2021)

When S.K. Singh became Governor Rajasthan, Rana Hamir Singh approached him for help. “I told him we have this problem.”

Singh requested President Pratibha Patil to intervene. The Home Ministry subsequently issued a special notification to the FRROs. But over the past few years, Indian officials have been overriding the authorisation.

When Ganpat applied for a six-month extension visa extension, the FRRO sent it on to Delhi instead of processing the application locally.

Unaware that the extension wasn’t forthcoming, Ganpat returned to Pakistan in May 2017 after his nieces’ weddings, a little more than two months after his original visa expiry but earlier than the requested extension.

No one raised any objections about an “overstay”, he says. In fact, the FRRO duly cleared his return through a ‘departure letter’ that is retained by Indian border officials. Had there been an issue, he says it would have been pointed out when he returned to Pakistan.

When Ganpat applied for an Indian visa again, he found himself blocked. He misses his children. Most tragically, he was unable to be with his mother in her last days. She died on 15 May 2021, less than three weeks after his plea to the Indian High Commission in Pakistan.

Ganpat married his first wife Magan in Jodhpur, 1996. The train was cancelled in those days so the barat flew from Karachi to Delhi. Magan came to Umerkot and obtained Pakistani citizenship.

Their three children, son Chander Veer Singh and daughters, Meena and Disha, now 21, 20, and 12 respectively, were little when Magan died of hepatitis in Karachi in 2012.

Two years later, Magan’s family in Jodhpur arranged Ganpat’s marriage to her cousin Dimple Kumari. The children have lived in Jodhpur since. They visited Umerkot once, a couple of years later and would like to go again, but their long-term visas or LTVs require a no-objection return to India (NORI) visa if they leave the country. And that is not so easy to obtain, they say.

Chandar Veer got engaged at the end of November. All the family was present except Ganpat. He participated in the ceremony via video call from Unerkot.

There are many other such families being kept apart by the visa issue. Several Sodhas told Shishir Arya of TOI that they duly apply for and are granted visa extensions in India. But after they return to Pakistan, their visa applications get rejected

Ganpat estimates that there are around 300 cases of ‘blacklisted’ Sodhas. He knows of dozens of such cases, like Shakti Singh, a physician the only brother of four sisters married in India. When he visited them in 2017, he got a visa extension through the local FRRO. He wants to go again to get married but is being refused a visa on grounds of ‘overstay’ last time.

Another case is that of Lohran, 75, widowed recently and alone in Khipro village. She and her husband were both ‘blacklisted’. Their children are in India.

Visa issues also keep brides and grooms apart. Three years ago, Rana Hamir Singh hosted three barats from Jaisalmir to Umerkot. When the brides’ Indian visas didn’t come through, he got visa extensions for the grooms.

“I told the Pakistan government, they are my guests, stuck in this situation.” The grooms eventually left. The visas came three years later. By then babies had been born. “Can you imagine?”

Recently however Ganpat Singh got some good news. Inquiries about his case led to the blockage being cleared, and he was told to re-apply for a visa. He couriered the application to the Indian High Commission in Islamabad on 27 November. The process normally takes 4-6 weeks.

He now awaits the visa that will reunite him with his family, sadly without his mother.

Jan 6: Updated to remove an error about the percentage of Pakistan’s Hindu population.

“Growing up, growing together”: Activists across South Asia resolve to continue working for a better tomorrow Feminise to Humanise: