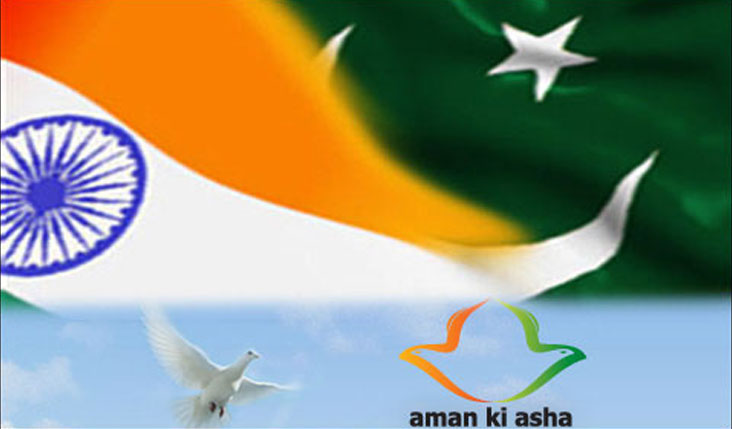 KARACHI: Aman ki Asha, the peace campaign launched by the Jang Group and the Times of India, has launched an online petition urging the governments to ease the current restrictive visa regime and let people meet.

The petition titled “Milne Do: India, Pakistan, let people meet” is online at Change.org. The campaign is being launched just ahead of the visit of the Indian Foreign Minister, S. M. Krishna, to Pakistan on Sept 7, 2012.

Since its launch on January 1, 2010, the Jang Group of Pakistan and The Times of India peace campaign has strongly lobbied for peace between the two nuclear-armed South Asian neigbours. Aman ki Asha has pushed for dialogue to resolve disputes, aggressively promoted trade and investment as a strong driver of the peace process and advocated increased people-to-people contacts.

“Some important and influential stakeholders are already formally collaborating with Aman ki Asha. On the business side, these include the Confederation of Indian Industry and the Pakistan Business Council. At the last Indo-Pak business meet in Lahore, May 2012, most of Pakistan’s mainstream political parties agreed that peace with India was the need of the hour. All important diplomatic missions in Islamabad, Rotary Pakistan, Rotary India, Rotary International to name only a few other organisatons, also support Aman ki Asha,” points out Shahrukh Hasan, Jang Group’s Managing Director.

“Now, this online petition with Change.org will hopefully make the AKA initiative go viral and take it to millions of global supporters. We believe this huge critical mass of public opinion and a groundswell of support for peace will make the governments realize that the people of Pakistan and India, as well as expats living the world over, desire peace.”

“Aman ki Asha is a media led, civil society movement. It was always the intention of The Jang Group and the Times of India to involve a broad spectrum of people in this campaign,” says Rahul Kansal, Executive President of the Times Group. “We hope this demonstration of solidarity and support will give confidence to both governments, and the specific recommendations made in the petition, will become part of the discourse expected to take place in the next few days.”

Change.org, the world’s fastest-growing platform for social change, will promote this online campaign via email and targeted messages to its members around the world.

Raheel Khursheed, Director Communications at Change.org, India, hopes that the petition will put pressure on the governments of India and Pakistan to “dismantle the visa regime as it exists today to facilitate people to people contact which is a must to address the mistrust between the two countries.”

The petition urges the governments to “allow long-term visas, especially to people with families and spouses across the border and to applicants who meet the visa criteria,” as well as to allow tourist visas between India and Pakistan. It also asks the governments to do away with the current restrictions of police reporting on arrival and departure, entry and exit from the same point, using the same mode of transport, and to allow visas to be valid for the entire country rather than a limited number of cities.

Indian and Pakistani nationals or former nationals, who currently face great difficulties obtaining visas to the other country, will appreciate the demand to “Ease visa restrictions for citizens of other countries who are of Indian or Pakistani descent, dual nationals, or expatriates from each other’s countries.”

The petition urges the governments to allow more than two journalists each to be based in each other’s countries and remove the ban on cell-phone roaming and cross-border media, television and publications.

“The authorities must refrain from trying to control the movements of their people, when their minds are free. It is mutual trust and genuine collaboration that will enable us to break from the past and repudiate the legacy of hatred and animosity. We can truly progress when ideas and art, business and tourism, and collaboration in the fields of health, sustainability and poverty alleviation are allowed to flourish and flow. Only then can our people and countries reach their full potential,” says the petition.