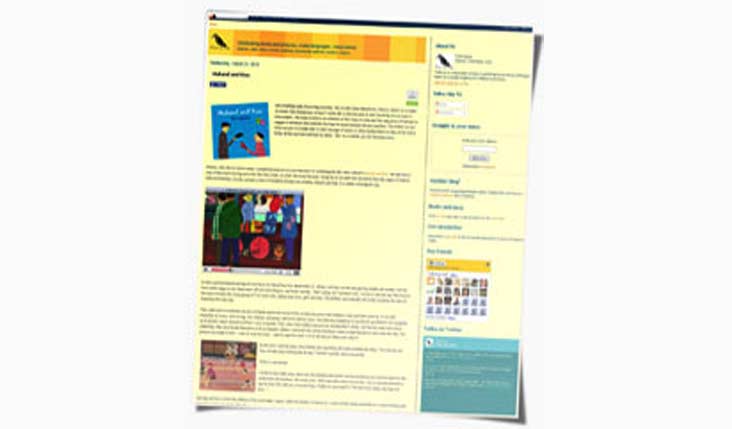 Did something really interesting yesterday. Was at Hari Shree Vidyashram, Chennai, thanks to a sudden invitation from Shreepriyaa asking if I would talk to the kids prior to their launching into an Aman ki Asha project “The Aman ki Asha is an initiative of The Times of India and The Jang group of Pakistan to engage in initiatives that underline the hope for peace between the two countires. The children at Hari Shree are part of a larger plan to send messages of peace on white handkerchiefs so they can be tied to flutter all the way from Amritsar to Lahore” this, in a nutshell; you will find more online.

Anyhow, when the invitation came, I jumped because we have just the book for something like this: Nina Sabnani’s Mukand and Riaz. We also have a copy of the award-winning animation film Nina made, on which she based the book. Using the art on cloth done by women from the region of Sindh in India and Pakistan, she has created a story of friendship between two children, Mukand and Riaz, in a simple and poignant way.

As they watched Mukand waving and waving to his friend Riaz from aboard the S.S. Shirala, and they saw the ship getting smaller and smaller, and the final credits began to roll, there were soft and loud whispers, and heads turning “He’s crying, da!” someone said. I turned to look and saw that many in the approximately 200-strong group of 7 to 9 year-olds, wiping away tears, girls and boys. The children were palpably and visibly moved by the story of friendship Nina had told.

They understood immediately the loss of friends and in the course of the excited discussion that followed, many questions came up. To do with friendship of course, and moving, and violence, and peace, and home and lots more. One little boy jumped up to say that his grandfather too had grown up in Karachi, where Mukand and Riaz’s story is located. Then, when they realized Mukand was actually Nina’s father, and that he really had a friend called Riaz, they were beside themselves with excitement. Where is Mukand? How will he find Riaz? I want to meet the person who made this film. The pictures are made of cloth. I want to read this book. I want to read this book. Is it in the library? Where will I find it?

By the time I took my leave, the children were sparkling with understanding and ideas. “You may be sure they will talk about nothing else all day,” Teacher Jayanthi said as we parted.

There is a postscript.

I wrote to Nina right away, about how the children had reacted and how proud we were all over again for the lovely book she had done. She wrote back: “What you write makes me cry too. I am so touched and what a day to share this with me, on my birthday. Thanks so very much!!!!! The best news today. Big hugs and love…”