Music was language of love at Bandra Fort 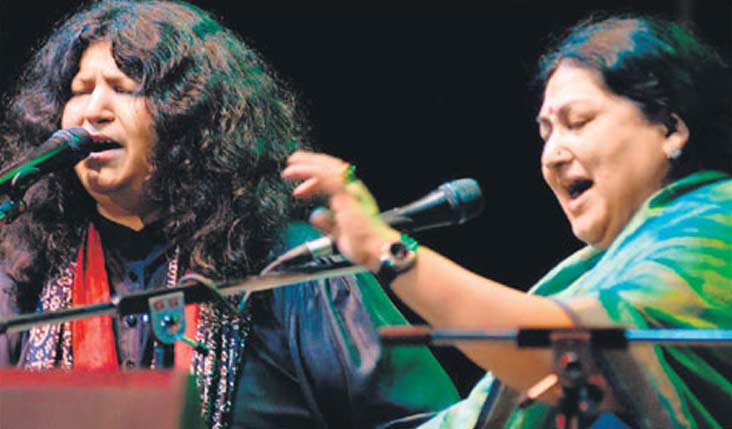 As a crescent moon rose from behind the stage, Bandra Fort became a mosque, a temple, a haven of mystic music on Sunday evening. Hundreds sat mesmerised, swaying and clapping, as they listened to Abida Parveen and, before her, Shubha Mudgal. The Sufi divas of Pakistan and India brought alive the poetry of Amir Khusro, Bule Shah, Shiv Narayan and Kabir, proving once again that music is a universal language, devoid of hatred and oblivious to boundaries. Abida sang with the contagious passion that has become her trademark, eyes shut, almost dancing on stage, reaching upwards with her hands, to frequent bouts of applause. Her energy was unstoppable, her humility genuine, her faith infinite. “I’m here doing my duty by god at your dargah,” she said, before starting, speaking in the kind of Urdu you wanted to capture in your vocabulary for ever. She sang some favourites like Chhaap Tilak, Tere Ishq Nachaya and a ghazal by Bahadur Shah Zafar, which delighted the audience even more.

Shubha Mudgal, whose stentorian voice and free-spirited delivery have made her one of India’s favourite performers, started with a joke. “I am here, like all of you, to listen to the legendary Abida. But when I asked The Times of India for passes, they didn’t respond, until I sent them a voice SMS which went like this” And she launched into her performance.

The two singers finally performed together on stage, the ever-popular Damadam Mast Kalandar, in a symbolic gesture to underline the spirit behind Aman ki Asha, the move towards peace between India and Pakistan, initiated by The Times of India and the Jang groups. The vibe was electrifying.

“When it’s people to people, there can be no borders visible,” said Gulzar to the emotionally charged audience, while introducing Abida. Javed Akhtar was also present with his wife Shabana Azmi and, on learning that it was his birthday, the audience sang happy birthday’ to him.

At the beginning of the show, theatre personality Firoz Abbas Khan said, “If we want to change history, we must change our vocabulary when we talk about India and Pakistan, let us introduce the word love.” What better medium than music? As a great composer once said, music is the mediator between the spiritual and sensual life much like love.

YEH DOSTI... Stringd, Euphoria to perform together for peace