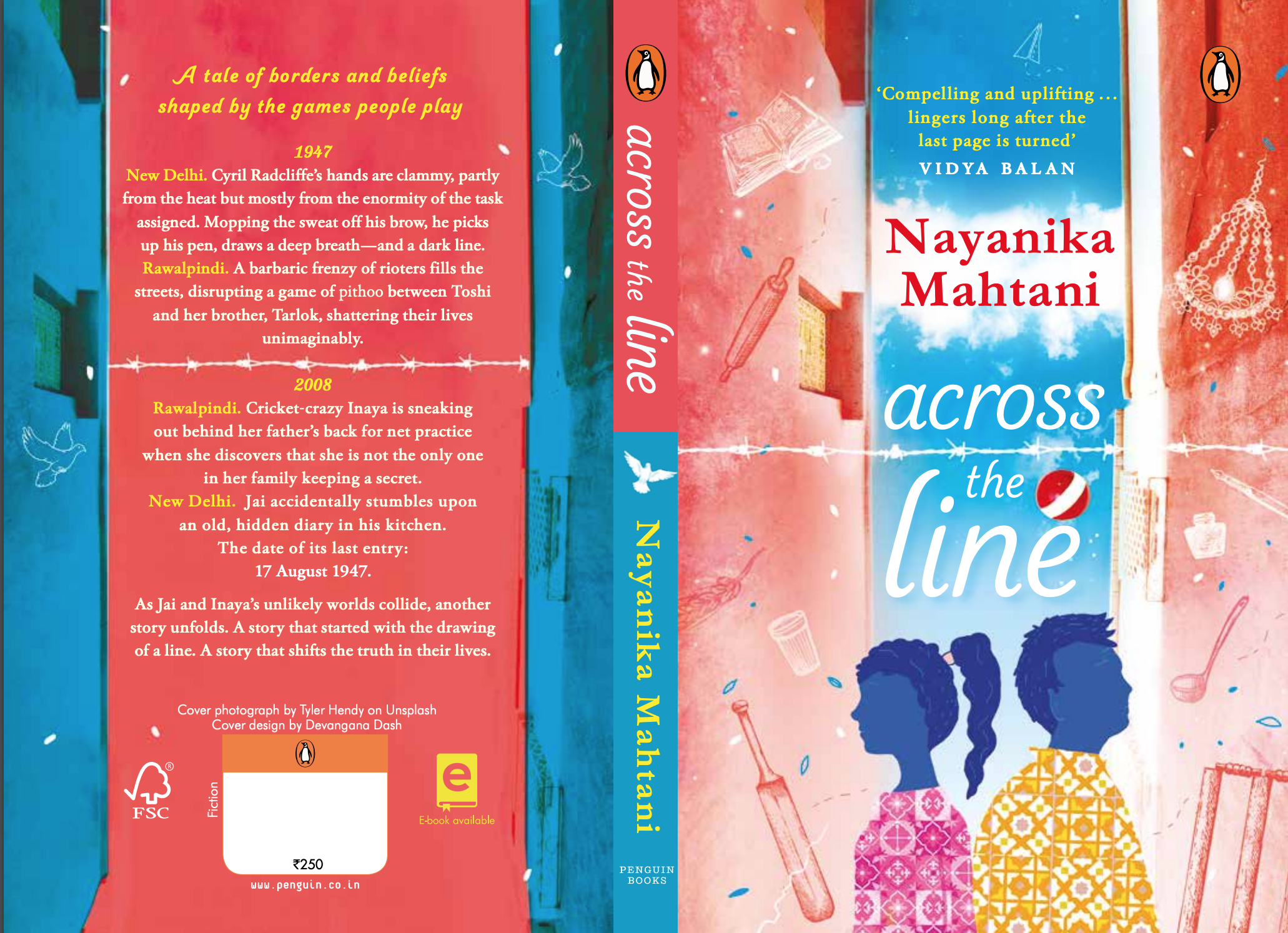 My grandfather’s family lived in Suri Mansion, a haveli in Rawalpindi near the Kalyan Das temple that my great -great -great- grandfather and his brothers built in the 1850s. Apparently the haveli was rechristened Nuri Mansion after the Partition. Fair enough, since the Suris had left the building.

I try and imagine my grandfather and his siblings’ lives in this haveli and temple complex of a hundred rooms. A life left behind and barely mentioned again in the countless stories we shared.

What must they have told themselves as they slept in refugee camps, having lost loved ones in that journey across the border? It leaves me with so many questions. How I wish I had asked them.

Perhaps it was from one such unasked question that the seed for my book Across the Line came. This book probably started writing itself many years ago when I was a young girl, because of a conversation I wish I had had – but didn’t.

I was about ten years old. As we always did over the school holidays, my parents, my brother and I journeyed from Kolkata to my grandparents’ farm in a little village in north India.

I didn’t know then that my grandparents had spent their childhood and youth in Rawalpindi, Lahore and Sargodha, that they had arrived in New Delhi as refugees in 1947. Alongside millions of others, they had come with just the clothes on their backs, having lost loved ones in an upheaval so deeply traumatic, that they never spoke about it. Except, that one time – had I stayed and asked.

Afternoons at the farm were sweltering, too hot for tractor rides or skimming stones on the canal or splashing around in the tube-well – which is what my brother and I would usually spend our time doing. So, our afternoon ritual was to laze around on the diwan in my grandfather’s study, with the bamboo chiks lowered and the air-cooler blowing khus-khus scented breeze our way.

Some days, our grandfather would ask us to select a book from his huge collection of Urdu novels and poetry, and he would read to us. Having grown up in the pre-partition era, he was fluent in Urdu, but couldn’t read Hindi. I could understand enough Urdu to get by so the arrangement worked pretty well for me. My brother, younger, would usually wander off to play with our cook’s son.

One afternoon, I selected a book and handed it to my grandfather. He looked at it, hesitated ever so slightly, and then announced its name – ‘Phundne’ – it meant ‘tassels’, he said. He told me it was a collection of short stories by someone called Saadat Hasan Manto. The story he chose to read to me was Toba Tek Singh.

By way of backdrop, he explained that this story was set in a lunatic asylum, a few years after the Partition. The governments of Pakistan and India had decided to swap their mentally ill citizens along religious lines, just as they had done with other people – so that Hindus, Sikhs and Muslims ended up on the “right” side of the border. I remember thinking this a rather silly plotline, but there was little else to do, so I listened. Manto’s dark satire about who were the real lunatics, was lost on me, of course.

I can still hear my grandfather’s voice, assuming different intonations as he read. He had me in splits as he muttered the well-known rant of the story’s protagonist: ‘Upar di gur gur di annexe di bedhiyana di moong di daal of di Pakistan and Hindustan of di durr phitey munh.’

Unaware of the context, I found the chants nonsensically amusing. Between peals of laughter, I looked up to notice that my grandfather had stopped reading. He sat slumped forward, his hands covering his face, his shoulders convulsing. He was sobbing.

I had never seen my grandfather cry before. But that day, my otherwise fearless grandfather who had braved lathi charges and prison in the fight for independence, wept. Unnerved, I went to call my grandmother.

In stunned silence, I watched her comforting him as if he were a child, murmuring, ‘Chhado, mitti pao,’ – let it go, bury it. I quietly left the room. Later that evening, I hid the book behind others, so I would never to take it out again — or see my grandfather cry.

I never asked him what caused those tears. The regret still leaves me feeling empty.

Over the years, my grandparents shared countless anecdotes about their early days in undivided India. The pranks they would get up to with their school friends – and the trouble it got them into with their teachers and parents. The uncooked legs of lamb that they would sneak into the kitchen garden to slow-roast overnight in the tandoor pit, without my strictly vegetarian great-grandmother’s knowledge. The street plays they would stage to protest against British rule. Their stories were peppered with fond anecdotes of their neighbours – Hindus, Muslims, Sikhs, Parsis – who had lived next-door for generations.

I would listen, enraptured, piecing together the fragments in my head, imagining the people and places that once made up their world.

What they never spoke about was the events surrounding the Partition itself. Perhaps it was just too painful to reopen the wounds. Perhaps, as refugees, grief was a luxury they could ill afford. Or perhaps, gaining independence had demanded centre-stage instead. Each Independence Day, I wonder if they also quietly mourn who and what they’d lost in the aftermath?

The book is my attempted tribute to a generation of quiet heroes on either side of the border who silently bore the brunt of a cataclysmic rupture in their lives. A generation that wordlessly erased its past – and gave their all to building our future. And most strikingly, a generation who, despite all they went through, harboured no malice.

Maybe, because they had seen first-hand that there were no ‘good’ and ‘bad’ people. That the aggressors were also victims. That an eye for an eye does indeed make us blind – and easier to manipulate by those with vested interests.

In these tumultuous times, as the world gets alarmingly less tolerant, we might do well to take a leaf from their book – to seek out what we share rather than what divides us – and not hand history the chance to repeat itself.

VIEW: Slideshow by Across the Line author Nayanika Mahtani presented at CLF21

I’d like to think that perhaps this story chose me to allow me a chance to make amends, in some small way, for not finding the words, when I should have. I hope these words do make a difference to someone, somewhere.

My grandparents always yearned to visit their ancestral home. Sadly, that could never happen. I’m sure they would have been happy to see the good use the temple is being put to – helping the visually impaired navigate life’s journey.

Ironically, so many of us with perfect vision continue to be blinded by the sordid, divisive games people play.

Nayanika Mahtani is an award-winning author based in London. Across the Line, her latest young adult book published by Penguin Random House is on the South Asia Book Awards’ 2020 Honours List.

One dance a month: Celebrating a shared culture, choreographer-dancer Tehreema Mitha launches video channel “Peace-ing it together”: Across the Line - a book or a movement to heal?